Washington: Even given the wild unpredictability of 2020, one thing seemed like a safe bet. Donald Trump would not be able to outdo the stunning photo-op he orchestrated in June by clearing protesters from outside the White House to hold up a bible outside a nearby church.

Then he went and did it by going on a surprise joyride outside the hospital where he is being treated for COVID-19. 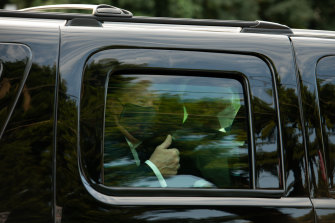 US President Donald Trump wears a face mask and gives supporters a thumbs up during a drive-by with secret service agents outside the hospital. Credit:Bloomberg

It was exactly the kind of audacious, damn-the-experts spectacle that explains why Trump's supporters adore him. It also sums up why his approval ratings have been stuck below 50 per cent through his entire presidency and why he is significantly trailing Democratic nominee Joe Biden in the polls less than a month before election day.

Trump's willingness to rope in several secret service agents to sit in a car with him so that he could wave to supporters outside Walter Reed Medical Centre shocked medical experts who said he had endangered peoples’ lives.

"Every single person in the vehicle during that completely unnecessary presidential 'drive-by' just now has to be quarantined for 14 days," tweeted James Phillips, an attending physician at Walter Reed.

"They might get sick. They may die. For political theatre. Commanded by Trump to put their lives at risk for theatre. This is insanity." 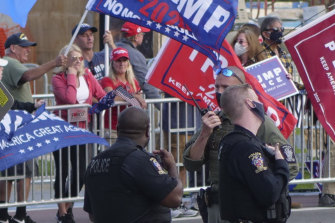 Explaining what she would do if Trump were her patient and suggested such a ride, Dr Leana Wen, a visiting health professor at George Washington University, said: "I'd call security to restrain him then perform a psychiatric evaluation to examine his decision-making capacity."

Trump could have expected to generate some sympathy among independent-minded voters after contracting COVID-19. It's common for citizens to "rally around the flag" in times of crisis, and cut their leaders extra slack.

Biden's decision to suspend all his negative advertising shows he knows it would be a bad look to attack a political opponent when they're in bad health.

But Trump and his administration seem to have been on a mission to squander any goodwill the President might have gained from his illness.

The White House's communications effort has been contradictory and confusing, reinforcing existing beliefs that the Trump administration is chaotic and dishonest.

The updates from White House physician Sean Conley seem to have prioritised boosting Trump’s ego rather than communication important facts to the American people.

On Monday (AEST) Conley admitted he had failed to inform the public that Trump had been administered supplemental oxygen, even though he had been directly asked about this by reporters.

"I was trying to reflect the upbeat attitude that the team, the President, over his course of illness, has had," Conley said.

"I didn’t want to give any information that might steer the course of illness in another direction. And in doing so, you know, it came off that we were trying to hide something, which wasn’t necessarily true."

The White House communications team has also declined to provide the public other important details, such as when Trump last tested negative for COVID-19.

In a video message on Monday (AEST) Trump said he had learnt a lot about the seriousness of the disease by contracting it.

"This is the real school, this isn't the let's-read-the-books school," he said.

"And I get it, and I understand it and it's a very interesting thing and I’m going to be letting you know about it."

He then undermined this message almost instantly by flouting social distancing rules by hopping into a car with other people. It looked like an indulgence, given no other coronavirus patient in the country would be allowed to do such a thing.

Trump is such an unorthodox president that he can seem immune to the normal rules of politics. But his photo-op outside the church didn't help him politically. Neither did his outlandish debate performance last week against Biden.

And neither, in all likelihood, will his reckless decision to go for an unnecessary car ride while hospitalised with a highly infectious and deadly virus.