Stars and Stripes flutter from flagpoles outside almost every home and business. Churches topped with giant white crosses loom around each bend in the road. The steamy heat of the rural Alabama summer is oppressive, the rumble of thunderstorms lingering on the distant horizon. And that’s just how the locals like it.

Welcome to Winston County, population 24,000, where nearly 90 per cent of residents voted for Donald Trump in the 2016 presidential election and locals revel in its nickname as the ‘Trumpiest’ place in America.

Their President reached a new low in the eyes of the world last week with an overtly racist attack on a group of four Democratic congresswomen, including Muslim politician Ilhan Omar, a Somalian refugee, who had been critical of his policies. 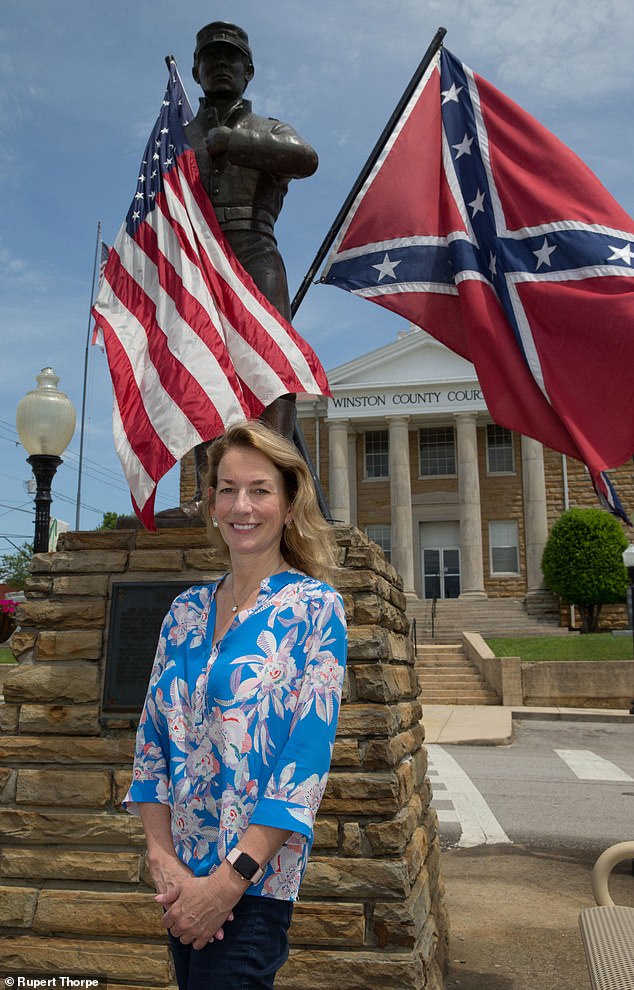 Caroline Graham in front of the civil war memorial displaying both the American and Confederate flags in Double Springs, Alabama

Trump used Twitter, his weapon of choice, to declare that if the women ‘hated’ America so much, they should ‘go back to where they came from’ – and he was promptly condemned by political leaders on either side of the Atlantic. Boris Johnson, an avowed supporter, branded the President’s tweets ‘unacceptable’.

Yet here, amid the peaceful white-picket fences of Double Springs, the Winston County capital, the voters just don’t seem too fussed. As one kindergarten teacher put it: ‘He’s not racist – he’s just saying what a lot of us are thinking.’ 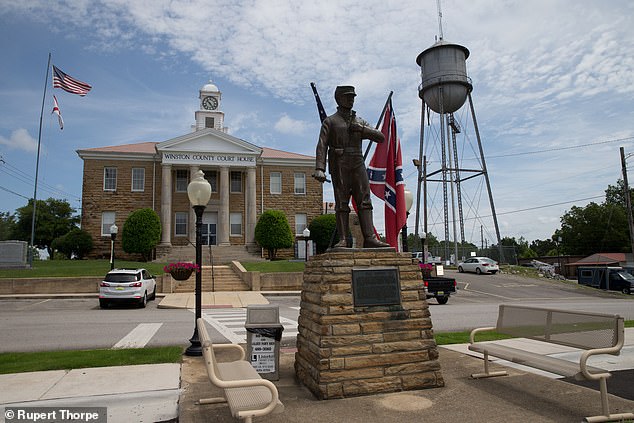 The civil war memorial displaying both the American and Confederate flags in Double Springs, Alabama

The people living amid the rolling countryside and thick pine forests of Winston County are almost entirely white. Double Springs may be just a 75-minute drive north of Alabama’s largest city, Birmingham – a birthplace of the Civil Rights movement and almost three-quarters black – but because the soil is too poor here to sustain cotton or other major crops, the county never had the influx of black slaves seen in other parts of the Deep South.

The county has more than 150 churches, mostly evangelical, and was ‘dry’ until just two years ago. Now restaurants can serve alcohol but there is a noticeable lack of the no-frills ‘dive’ bars commonplace in most of rural America. There is, as one local put it, though, a ‘roaring trade in moonshine’ – hard liquor made from rye and sugar.

The town centre of Double Springs contains a memorial to the American Civil War flying both the Stars and Stripes and the blue-cross banner of the Confederacy. Also known as the ‘rebel’ flag, it has become a highly divisive symbol in the United States because of its adoption by far Right and neo-Nazi groups. 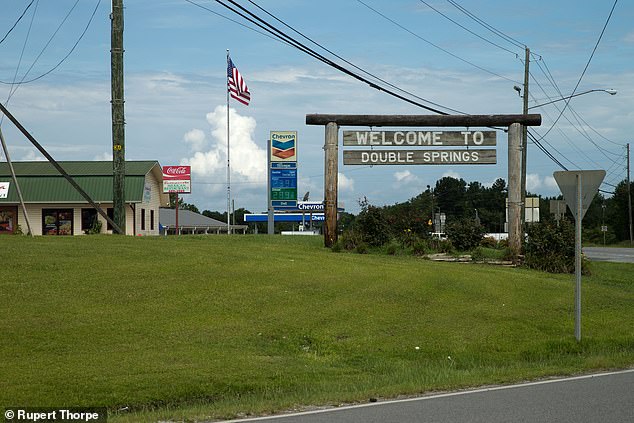 The county has more than 150 churches, mostly evangelical, and was ‘dry’ until just two years ago – meaning no alcohol served

The Confederate flag has been banned in many states but continues to be flown in Winston County, mostly outside the scores of trailer homes which dot the landscape.

Jack McCollar, 73, a local property developer, was getting into his truck outside the town’s Foodland grocery store. He said President Trump’s remarks would have ‘absolutely no effect’ on his core group of supporters.

‘He’s quick to shoot his mouth off but I don’t think he’s a racist,’ Mr McCollar said. ‘He says what he feels and he says what a lot of people are feeling. 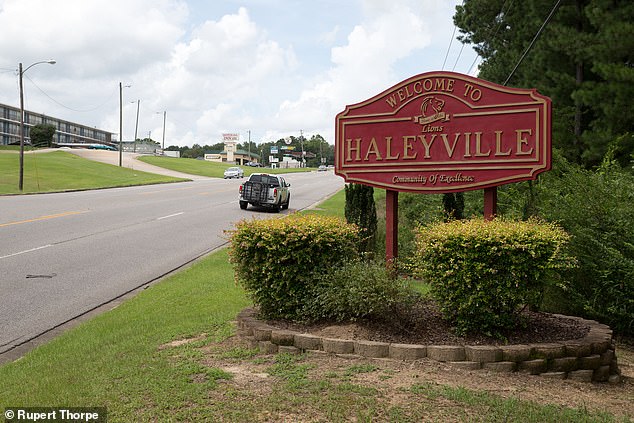 The town sign in Haleyville, Alabama. Haleyville is Winston County’s largest town, although, with a population of just 3,982, size is relative in these parts

‘He was the best man in 2016 and he will be in 2020. I can’t see anyone coming along from the other side who is capable of beating him. He’s doing everything he said he would. He’s putting America first and he’s starting to get results.’ 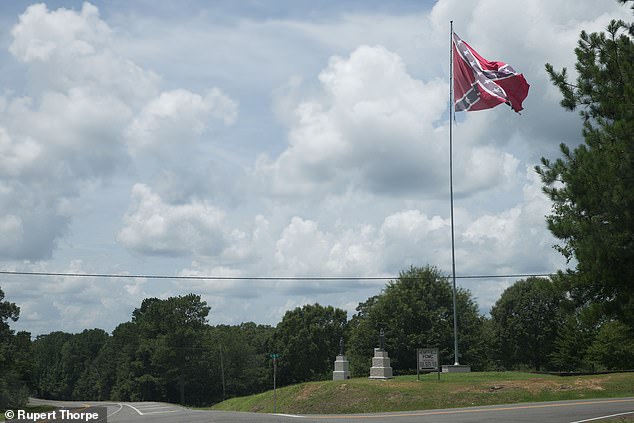 The Confederate flag has been banned in many states but continues to be flown in Winston County, mostly outside the scores of trailer homes which dot the landscape

And that is the key – the voters of Winston County (and Alabama as a whole) are already seeing the positive effects of the Trump administration. Mr Trump introduced punitive taxes in traditionally Democratic areas on the East and West coasts – in New York and California – but Alabama is enjoying an economic upturn thanks to tax cuts.

In fact, since Trump took office in January 2017, the state economy has thrived, with a healthy increase in manufacturing and a boom in construction.

Little surprise then, that in Haleyville, a 20-minute drive north-west from Double Springs, those we meet are unabashedly pro-Trump. Haleyville is Winston County’s largest town, although, with a population of just 3,982, size is relative in these parts.

‘I love him, we all do,’ gushed 53-year-old Boo Brooks, who owns The Dixie Gypsy selling clothing and antiques. ‘We’re proud to be the Trumpiest place in America. It’s a badge we wear with pride.’ Ms Brooks, a married mother of three who is also a kindergarten teacher, says she ‘fell in love’ with the President after travelling to Birmingham for a Trump rally during the 2016 campaign. 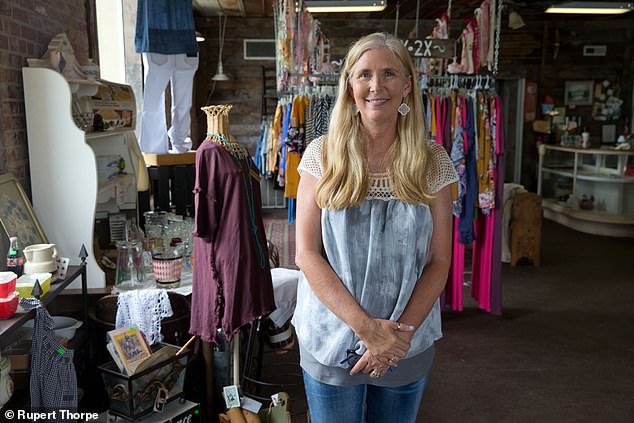 Boo Brooks, 53, owner of the Dixie Gypsy in Haleyville Alabama

‘I agreed with everything he said and he said it in a way I could relate to. People around here love the President because he’s doing what he said he was going to do. He’s putting America first. Our enemies respect us and are frightened of us, and that’s not a bad thing.’

It is to his hardened supporters that Trump is appealing with every so-called ‘gaffe’. And he knows them well.

Ms brooks believes that, far from damaging his election chances for 2020, Trump’s racist rhetoric will only endear him further to the population of Winston County – and beyond.

‘Not only will it not hurt him, I think his comments will help him get back in,’ she says. ‘If the congresswomen who attack America don’t like us, then why not tell them to go elsewhere? I don’t see that as racist. We want a President who speaks to what the majority of Americans feel in their hearts, and this President does that.’

Ms Brooks, whose husband Todd runs a business renovating houses, says much of the unhappiness in Winston County came from the fact that jobs in the area – particularly at a giant chicken processing factory and three local plants constructing mobile homes – have been taken by illegal immigrants from Mexico and Central America. 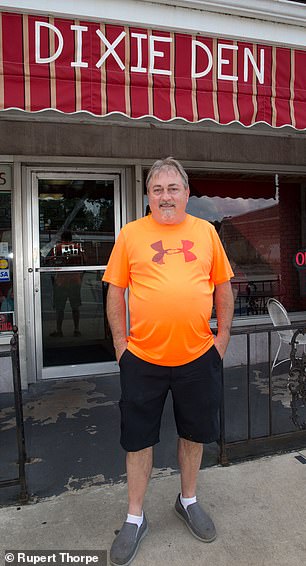 ‘I have no problem with people coming here legally and paying taxes. But illegals come here and you never see them except when they go to the bank to send cash back home,’ Ms Brooks continues.

The money, she says, is drained away from the local economy, with illegal workers ignoring local businesses. ‘There are women who operate restaurants out of their own homes and that’s where they eat,’ she comments.

Could Trump supporters like her be described as rednecks? That’s ‘totally fake’, she replies.

‘Yes, we have a white, working- class population but look around. This isn’t backwoods country. We believe in Jesus and America.’

The homes here have neatly manicured front lawns, many surrounded by white-picket fences. While a handful of store fronts are abandoned, many businesses are flourishing. Haleyville certainly doesn’t look like a redneck town.

Toby Sherrill, 56, runs the Dixie Den and an adjoining cinema. On Friday, he is preparing for his busiest night of the week with the opening of the new Lion King movie.

‘I’m a Christian man and I have Christian values. We’re doing fine,’ he comments. ‘The economy is good and business has been great.’ And while he applauds Trump’s crackdown on illegals – ‘Immigration is a problem, a bad problem’ – he thinks there’s a great deal more to do. While it’s true that agents from Immigration and Customs Enforcement (ICE) sometimes raid local manufacturing plants, Mr Sherrill claims the owners are tipped off in advance. 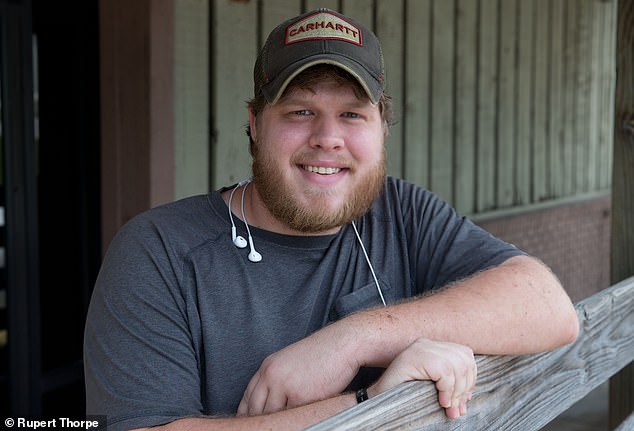 ‘They know about it and they move the illegals out and hide them. These are people who vote Republican but still use an illegal workforce because they do the dirty jobs Americans won’t do and they do it for peanuts.’

Jesse Smith, 26, works in Russell’s Rising Smoke Barbecue And Steakhouse, owned by his parents. ‘I will vote for him next time,’ he says. ‘I’m a Christian and I like what he says about abortion. He’s anti-abortion. I will vote for him just on that.’ 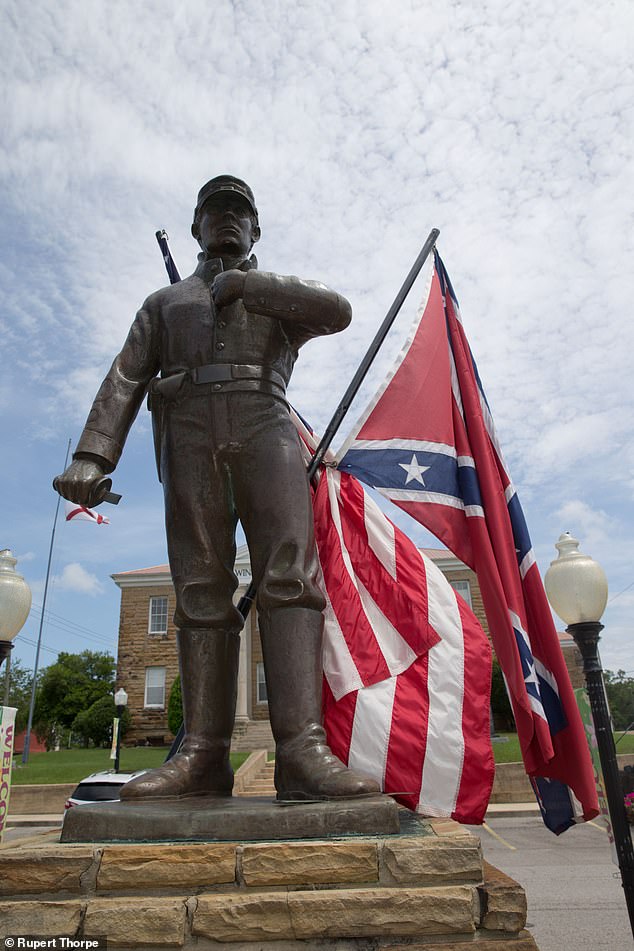 So does Jesse think his twice-divorced President, once infamously taped boasting about how he liked to grab women by the ‘p****’, is a good Christian? ‘No,’ Jesse concedes. ‘But he’s a good leader and he stands up for us regular working Americans who are good Christians. I don’t think there’s anything he can do that will make us not vote for him. The good outweighs the bad.’

Ken Sunseri, mayor of Haleyville, tells me: ‘People are proud to see someone stand up for their rights.’

As we get ready to leave Haleyville, I bump into Boo Brooks again. She’s glad someone is finally ‘telling the truth’ about Trump’s supporters, ‘because most of the media hates him but there were 65 million people who voted for him and most of us reckon he’s doing a fine job.

‘I think he’ll get in for another four years and then I hope his daughter runs for President because I think she’d get in too. When it comes down to it, the President is doing what he said he’d do. He’s putting America first. If people don’t like what he says, tough.’

As the clouds darken and more thunder rolls in over Winston County, Trump shows every sign of weathering another tumultuous storm.