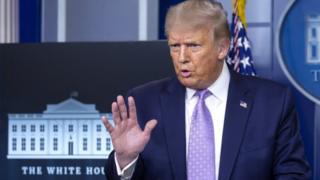 Both Democrats and Republicans have criticised President Donald Trump for suggesting he would make his convention acceptance speech from the White House.

Critics accuse Mr Trump of politicising the seat of presidential power, saying such a move could even be illegal.

The Republican president denied all the accusations.

“Well, it is legal,” Mr Trump said at a news briefing on Wednesday, adding that the 1939 Hatch Act banning government employees from using official authority to interfere with the outcome of an election did not apply to him.

Earlier that day, the president told Fox News: “I will probably do mine [acceptance speech] live from the White House. If for some reason somebody had difficulty with it, I could go with someplace else.

“If I use the White House, we save tremendous amounts of money for the government in terms of security, travelling.”

The president is expected to make the speech at the end of the Republican National Convention in Charlotte, North Carolina, on 24-27 August. This will be a scaled down event because of the coronavirus outbreak.

Mr Trump is the party’s sole remaining nominee, and his re-nomination will officially launch his re-election bid.

Critics say if Mr Trump goes ahead with his speech plan, it will be just his latest break with presidential custom, which draws clear lines between official business of the head of state and campaign events.

Mr Trump has previously been accused of flying on Air Force One to campaign rallies and turning his White House coronavirus briefings into campaign speeches.

What do the critics say?

Ms Pelosi told MSNBC that President Trump would once again “degrade the White House” by using it for a political event.

She predicted that a convention gathering at the White House “won’t happen” for legal and ethical reasons.

Ron Johnson, a Republican senator representing Wisconsin, said this was “probably not allowed”, adding that Mr Trump “probably shouldn’t do it”.

Meanwhile, Mary Cheh, a Democratic member of the Council of the District of Columbia, warned that this could trigger protests against Mr Trump in the capital.

“It could be a lightning rod for confrontation,” she said.