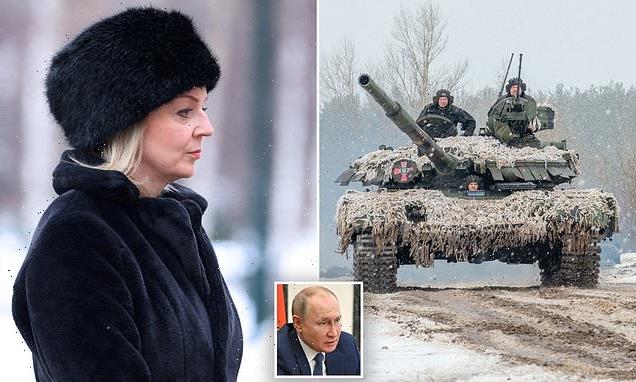 Liz Truss will show solidarity on a visit to Ukraine today as she warned the West must not be ‘lulled into a false sense of security’ by claims of a Russian withdrawal.

The Foreign Secretary is heading for talks in Kiev with the situation still on a knife-edge despite weeks of frantic diplomacy.

The US has accused Russia of adding up to 7,000 troops near the Ukraine border despite Moscow insisting some units are returning to base after ‘exercises’.

Ms Truss said the military build-up shows ‘no signs of slowing’, and voiced concerns that Vladimir Putin will drag the crisis out for ‘months’ to destabilise Nato.

The visit comes as a UK defence minister warned that the period of ‘acute competition’ between Russia and the West ‘could last a generation or more’.

The Kremlin denies it has any plans to invade Ukraine and has released footage which it claimed showed troops and equipment pulling back from locations near Ukraine following the completion of military exercises.

But a senior White House official said 7,000 extra troops had been deployed and there had been a marked increase in false claims by Russians, including reports of unmarked graves of civilians allegedly killed by the Ukrainian Armed Forces. 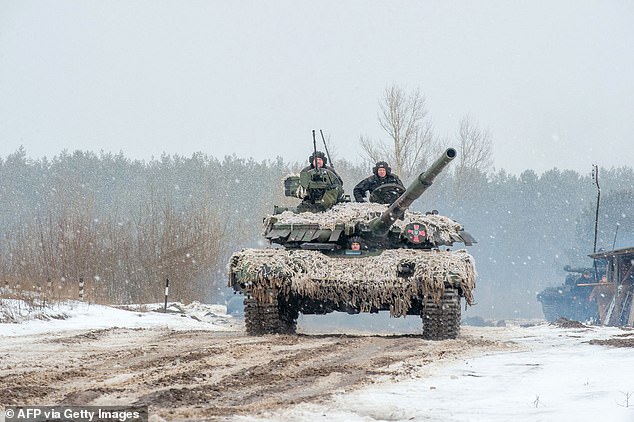 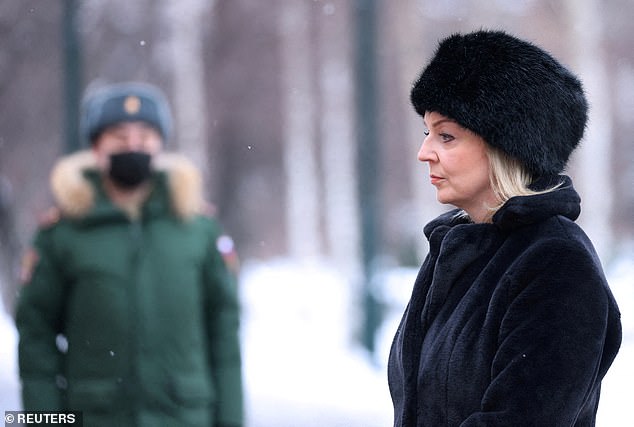 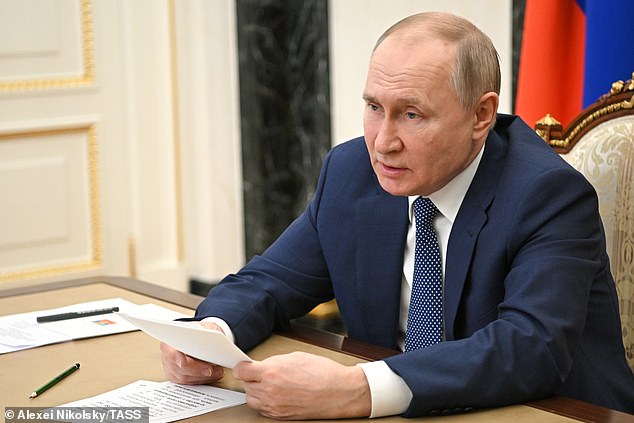 Ms Truss said the military build-up shows ‘no signs of slowing’, and voiced concerns that Vladimir Putin (pictured) will drag the crisis out for ‘months’ to destabilise Nato

In an article for the Telegraph before her departure, Ms Truss cautioned that Mr Putin is ‘testing our mettle’.

‘We must not be lulled into a false sense of security by Russia claiming that some troops are returning to their barracks, while in fact the Russian military build-up shows no signs of slowing,’ she wrote.

‘We must have no illusions that Russia could drag this out much longer in a brazen ploy to spend weeks more – if not months – subverting Ukraine and challenging Western unity. This is a test of our mettle.’

Ms Truss will use a speech in Kyiv to say the ‘path of diplomacy’ remains open if Moscow really does want a peaceful resolution to the crisis.

‘But we are very clear – if they decide to continue down the path of aggression, there will be massive consequences, bringing Russia severe economic costs and pariah status,’ she will say.

Mr Heappey told LBC that whether or not Mr Putin decides to launch an invasion: ‘I think we have to be clear that we are entering a new period of acute competition with Russia that could last a generation or more.’

Nato’s defence ministers, meeting in Brussels, were joined by counterparts from Ukraine and Georgia to show support for the two states.

Nato secretary general Jens Stoltenberg said: ‘There are signs from Moscow that diplomacy could continue but so far we have not seen any sign of withdrawal or de-escalation.

‘Russia has yet again demonstrated a disregard for the principles underpinning European security and its ability and willingness to threaten the use of force in pursuit of its objectives.’

Moscow has repeatedly denied that it has any intention of attacking Ukraine, despite massing an estimated 130,000 troops along the border, and it has mocked reports in the West which had suggested an invasion could have been launched on Wednesday.

‘This is a very ridiculous situation, there has been hysteria, even hype, fanned for several weeks by our Western colleagues,’ he told ITV’s Peston programme. 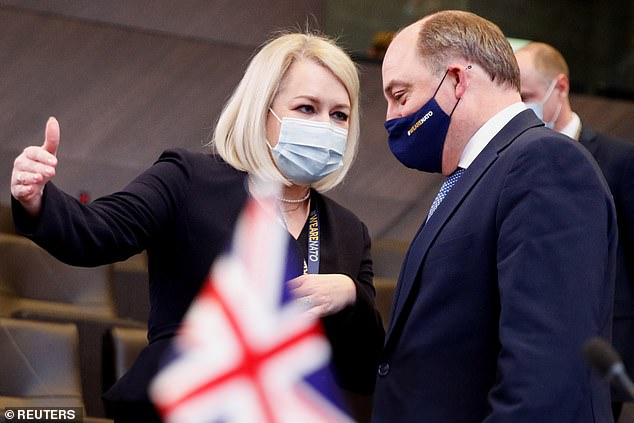 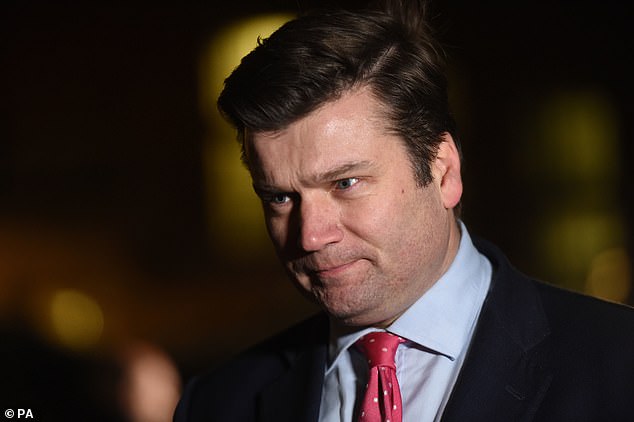 ‘They convinced each other and the whole world that Russia was about to invade, they were even naming concrete dates. So it happened in their minds, in their heads.’

Although an invasion of Ukraine is unlikely to result in British troops fighting, as the country is not a Nato member, Russia’s military build-up has caused anxiety among eastern members of the alliance.

UK forces have been committed to efforts to bolster defences in Nato’s eastern flank.

Britain has already said it is doubling the number of troops in Estonia, with around 850 members of The Royal Welsh battlegroup heading from Sennelager in Germany and bases in Europe for the Baltic state, while 350 Royal Marine commandos are being despatched to Poland.

Four additional RAF Typhoon jets are heading to Cyprus to join Nato patrols over eastern Europe while offshore patrol vessel HMS Trent will shortly be joined in the eastern Mediterranean by HMS Diamond, a Type 45 destroyer.