The truth about Robbie Williams’ very pushy real-life angel: Trainee accountant who was tipped as an X Factor judge ‘rescued’ the drug addled rockstar – and married him

Robbie Williams is pretty scathing in his assessment of himself: ‘Left to my own devices, I’m inclined to sabotage everything,’ he says.

Who could disagree? As he demonstrated by singing at the opening ceremony of the World Cup and flipping a middle finger at the 340 million people watching around the world.

It’s not clear what made the 44-year-old do it, but he is known to be a campaigner for LGBT rights and was heavily criticised for accepting the invitation to perform in a country known for its outdated stance on gay people. So . . . 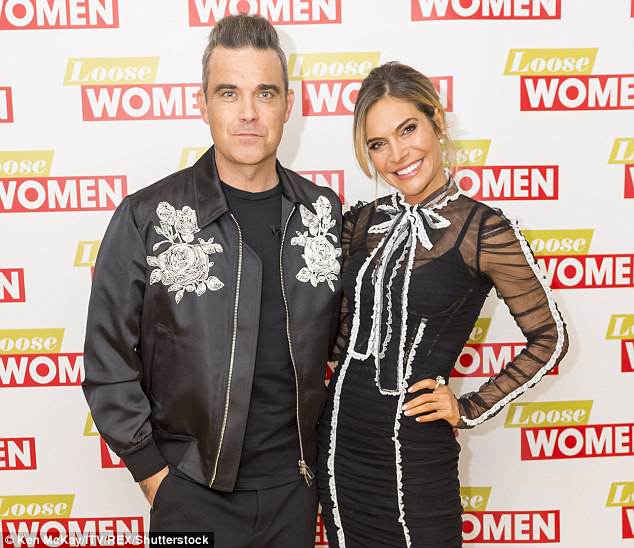 My rock: Wife Ayda Field has kept her rockstar husband’s demons at bay since they met eight years ago

Anyone who knows Robbie, however, would say it was probably not a political stance. Pre-meditative, far-reaching thoughts aren’t really his thing.

A veteran of two rehabs, a believer in aliens (to the point where he thinks he has seen them), agoraphobic, anxious, depressed, addicted to food and a sleepwalker, he was probably just being Robbie, namely, a loose cannon.

Despite being worth £155 million, only last year he confided that if he manages to have a good day, it will only be because he has been able to balance his medications. So what can it say about Simon Cowell and his predicament at ITV that he is turning to Robbie to rescue the X Factor? 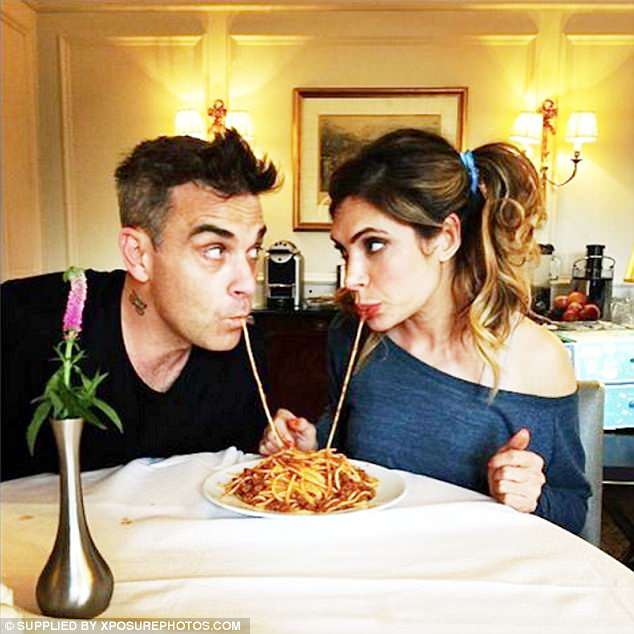 She’s the one: Robbie and Ayda eat spaghetti Lady And The Tramp style for an Instagram photo

The show, which has slumped in the ratings and is looking increasingly dated, is to be revivified by the hiring of Robbie to the judging panel this year to replace veterans Louis Walsh and Sharon Osborne.

The answer lies in the other person whose name is on the reported £10 million contract: Robbie’s 39-year-old wife, Ayda Field.

You may also ask what does Ayda know about music to have earned her a place on a talent judging panel? 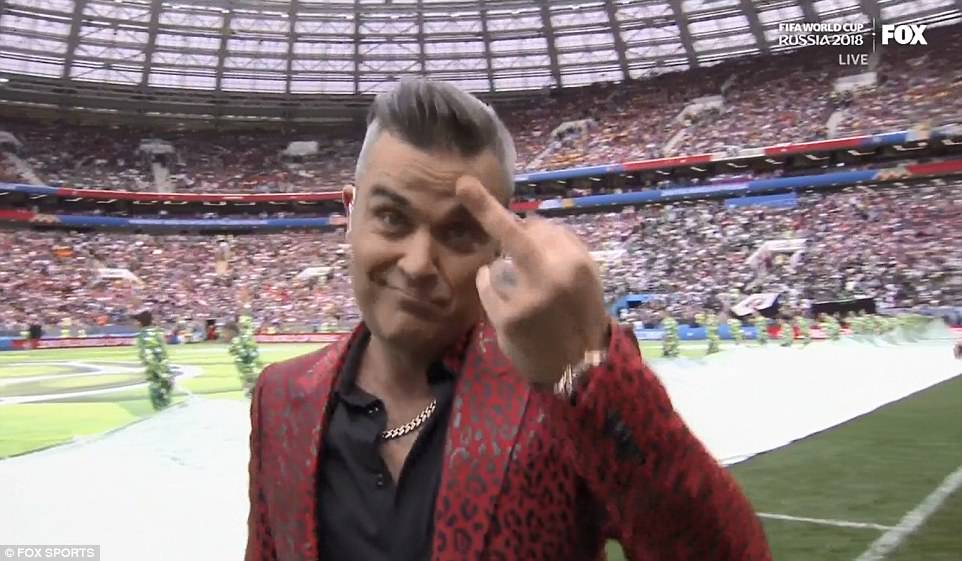 Nothing, at least nothing in any professional capacity.

A Turkish-American actress, dating and then marrying Robbie eight years ago has been her biggest claim to fame — unless you count a stint on cheesy U.S. soap Days Of Our Lives, and occasional appearances on ITV’s Loose Women, of course.

Even Robbie has said there are ‘shades of Linda McCartney’ about them working together (Linda joined her husband Paul in Wings, despite no musical accomplishment whatsoever).

The truth is Ayda’s chief talent is keeping Robbie together and the cash rolling in. He won’t — he can’t — do it without her. And she wouldn’t have got the X Factor call, and the fame and attention she adores, without him. It is a serious display of marital co-dependency. 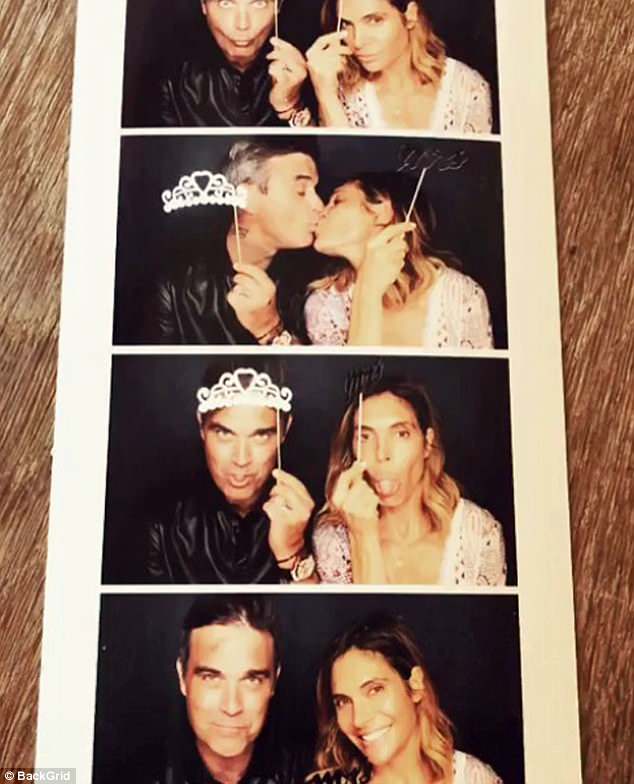 Happily, showbiz is in Ayda’s blood. Born in Los Angeles, her mother Gwen, who spends weeks at a time with them at their homes in LA and in London, is a successful film producer.

Actor Jake Gyllenhaal was a school friend. After studying law and accountancy, Ayda had been set to become a tax accountant, but, a natural show-off, she followed her heart into showbusiness and ultimately onto Robbie.

She is friends with Simon Cowell, and his girlfriend Lauren — and has even fostered a connection between Simon’s son Eric, four, and her own daughter, Teddy, five. She’s mentioned how the pair have play-dates.

She’s also very close to singer Adele, to whom she was introduced by Robbie.

So just how did Ayda save Robbie — and what can we expect from his return to showbiz?

Robbie became famous when he was only 16, a star-struck lad from Stoke-on-Trent, when he joined boy band Take That! Their fame and success was huge, and brought with it great pressure.

He said: ‘The only thing that mattered to me as a 16-year-old was having a white Porsche Carrera, being able to buy my friends new trainers and being on Top Of The Pops.’

‘To my mother it was hell. We were constantly under threat of being burgled.

‘I slept with a starting pistol and a hammer under my pillow. My mum closed the curtains in 1991 and didn’t open them again until 1995. She was miserable, which made me miserable.’

Serious problems were caused by his unhappy relationship with manager Nigel Martin-Smith who he claimed handed out ‘psychotic b******ings’ in which he was told he was too fat, and couldn’t dance.

Robbie said: ‘I wasn’t liked, I was a problem . . . and those were my formative years.’

After leaving the band in 1995 Robbie went on a drink and drug binge for two years. He started the first of several legal actions against Martin-Smith, suing him for expelling him from the band. 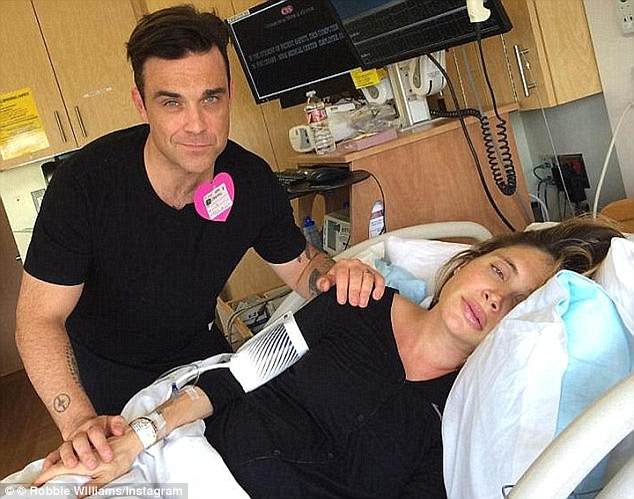 That case was settled with Robbie paying £150,000 on the eve of a court appearance.

He was then sued by Martin-Smith over an advance of £90,000. Martin-Smith won, Robbie then appealed and lost again. The final bill was around £1 million.

He also settled two cases against two other managers, Tim Abbot and Kevin Kinsella. He then lost a further case against Martin-Smith over lyrics on the album Rudebox, which were defamatory.

Robbie also fell out with Guy Chambers, the man who co-wrote all his big hits, such as Angels, Millenium, and Let Me Entertain You.

His talent for self destruction continued with his deal with EMI — the most lucrative in pop history — going sour.

Robbie felt bruised by the reception of his 2006 album Rudebox and went into a downward spiral. He said: ‘I did a lot of damage to my psyche on that 2006 tour; I lost my confidence, and it has taken years to get it back.

‘During that time, I was convinced I couldn’t do it any more, the spark had gone, the secret ingredient to being a pop star had deserted me — and without it, what am I?

‘So off I went into my wilderness years.’

His drug abuse during those years was terrifying.

By the end of 2006, he was on a ‘sort of enforced sabbatical.’ Life was mostly about insomnia, smoking, drugs and watching reality TV alone in his mansion in Los Angeles, surrounded by works of art by Andy Warhol and Roy Lichtenstein, and his collection of 600 pairs of trainers.

By the time he checked into rehab in 2007 he believed he was no more than 24 hours from death.

It was around this time that Ayda entered his life. Their meeting, at a party in Hollywood, was typically bizarre. ‘I got tucked into a lot of drugs,’ he recalls. ‘I took a turn for the worse because I started to cluck like a chicken.

‘So I was in the Jacuzzi with a very, very hot girl in Hollywood, doing a Hollywood thing but then I got ill, started to cluck and had to go home.’

That ‘very hot girl’ was Ayda, and it didn’t put her off. Besides, she has a rather more romantic recollection of the encounter, telling an interviewer in 2016: ‘We started to talk and as corny as it sounds something just happened. There was an electricity between us.’

Alas, after a few blissful weeks he dumped her. Ayda said: ‘He went to rehab. I was devastated. But at the same time I understood because I could see he needed help.

‘I already loved him. I loved him enough just to want him to be well. I thought that was it: right man, wrong time. Over.’

Sometime later he was at the famous Chateau Marmont hotel in Los Angeles having drinks with actress Cameron Diaz and telling her the story of his romance with Ayda.

She told him: ‘It doesn’t sound like it’s over.’ Robbie said: ‘In that instant something clicked. So I got into a car and went to her door and that’s the moment I committed to her.’

Which all sounds wildly romantic until you consider that earlier that same year he had made a similar romantic gesture to Rachel Gilson, a sweetheart from his schooldays.

He called her up and told her that he was ready to settle down, and could she fly over to be with him.

Within five days she was heading home in tears after the couple had a petty argument.

She said that some of his behaviour — possibly caused by the drugs — had been bizarre.

With Ayda, though, domestic bliss of a sort somehow followed.

A star since he was 16, Robbie had never been in a supermarket and didn’t know what a cucumber looked like, she says.

Ayda seems to take Robbie’s eccentricities in her own off-beat stride. They had their eight dogs as bridesmaids and page boys at their wedding in 2010. She calls him Sir Honey Dijon and he calls her Lady Sea Salt and Vinegar — after the crisp flavours.

They live in two huge houses in Los Angeles and London and have children Theodora, known as Teddy, five, and Charlie, three. Friends say she understands him.

She says: ‘Rob and I have always talked very openly. When I met him it was just before he went to rehab for the second time. I didn’t live through a lot of the earlier stuff, but he’s talked to me about it many times over the years.

‘How he’s felt with all that self-loathing, all that fear that you won’t get to be who you want to be, and the absolute power of addiction.’

She didn’t raise an eyebrow when he says that watching her give birth was like watching your favourite pub burn down.

She even loved him tweeting throughout the birth of son Charlie saying that she felt the idea was ‘genius’.

Both of them are veterans of many hours of therapy: Ayda describes it as just what you do to understand yourself, if you are from LA.

She adds: ‘There are things about Rob and me that are incredibly alike. To want to perform comes from a place of insecurity and people-pleasing, which we both share. But it’s a healthy outlet. There are a lot of people out there taking themselves far too seriously. We are very happy to be more than a little bit ridiculous. It’s acting out in a way that doesn’t do anyone any harm.’

Robbie calls her his Swiss Army Knife because she does so much for him. ‘I’m a better person for her being here, I look after myself, because she deserves that. And I’m happy, I’m content,’ he says.

She nursed him back to health last year after he quit his tour following a complete breakdown and being ordered home by his doctor. She put him on a vegan diet and insisted on a strict programme of yoga and Pilates.

She says, proudly: ‘My big monkey is doing really well. He’s still got the jazz hands and is ripping his clothes off.’

He believes that the secret of their romance is that he is ‘in like’ with her which will make the relationship eternal.