Sipping drinks and enjoying VIP treatment at a tennis tournament in Barcelona, these are the Spanish bosses of TSB.

While many British customers suffered a seventh day locked out of their accounts, chairman Josep Oliu and chief executive Jaime Guardiola Romojaro were yesterday living it up at the elite event.

Meanwhile, TSB staff in the UK were working round the clock to solve the IT collapse which has engulfed the bank. 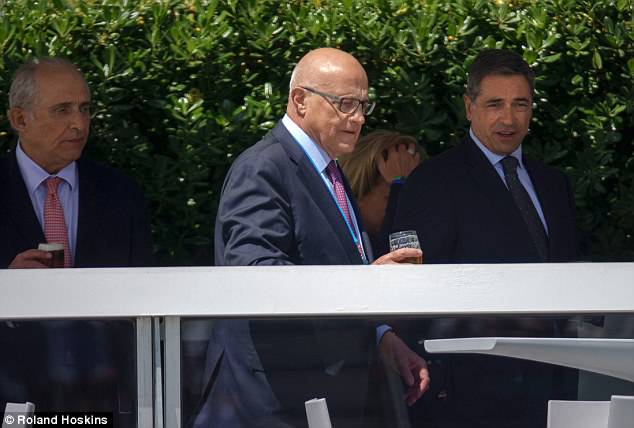 The executives mingled with guests invited by Sabadell, which sponsored the Barcelona Open and bought TSB for £1.7billion in 2015.

Sabadell had taken over a corner of the venue behind two of the stands on the centre court, giving guests access to the best seats.

Ordinary visitors were turned away from the VIP zone by guards who told them the event was ‘private’. Guests were served Segura Viudas cava by young female waiting staff dressed in short red tennis dresses.

It is in stark contrast to the humble foundations of TSB, which was founded by the Reverend Henry Duncan in 1810, to lend cash to his poorest parishioners.

Mr Oliu, who has been blamed for trying to mastermind the IT upgrade of TSB from Spain, was seen drinking a beer on a balcony yesterday afternoon while he hosted other invited executives and their wives.

They looked down on the forecourt where other VIPs ate appetisers of Spanish tapas.

Mr Oliu then headed to the gourmet restaurant reserved for VIPs and shook hands and chatted to other guests.

Executives sat at long tables inside and were served a lavish lunch. Sabadell had issued a statement boasting of the successful upgrade to the TSB bank system. It told how the multi-million pound project moved 5.5million UK customers on to a new system designed in Spain.

Mr Oliu had said that with the IT upgrade Sabadell ‘had proven its technological management capacity… on an international scale.’ The document was deleted shortly after as the scale of the problems besetting UK customers emerged.

Images on social network LinkedIn then emerged of IT workers in Spain who oversaw the disastrous transfer celebrating with sparkling wine.

They included the captions ‘TSB transfer done and dusted!’ and ‘Hell of a team!’, according to The Guardian newspaper. The pictures were posted just as the disaster was beginning after the switchover happened at the weekend.

TSB customers continued to suffer problems with their online banking last night, including wages failing to be paid into their accounts and bills going unpaid. 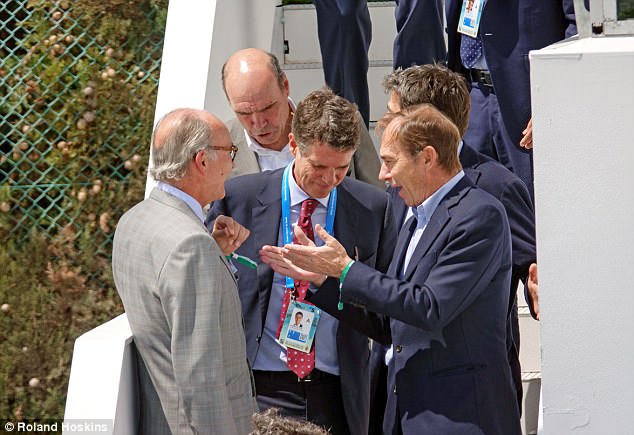 Jaime Guardiola Romojaro, centre, chatting to fellow guests at the event, where executives were served a lavish lunch

Others said they have been turned away in shops when their cards failed to work.

The bank admitted yesterday that half of its five million customers were still unable to access their online accounts.

Those that were able to log in endured problems including missing standing orders, and in some cases, seeing the wrong balances.

Business customers of TSB reported they had been unable to make the usual payroll runs, meaning customers of other banks have also been affected.

At one point yesterday afternoon, customers reported that the internal systems in some branches had also gone down. TSB branches have opened for 12 hours a day, and TSB chief executive Paul Pester faces a parliamentary investigation and calls for him to quit.

Many customers have threatened to leave the bank and the comparison website Go Compare, said that it has seen a 100 per cent surge of customers to its bank account switching service.

Customer Melanie Azzopardi tweeted: ‘This is absolutely ridiculous. Can’t transfer money online. Trying to call and have been in a queue for 33 minutes.

‘Not how I want to spend my day. I will open an account elsewhere.’