Erdogan becomes the ’21st Century Ataturk’: President is sworn in with sweeping new powers that put him on  a par with modern-day Turkey’s founder

Recep Tayyip Erdogan has been sworn in as Turkey’s first president under a new governing system that gives him sweeping executive powers.

Erdogan, who has dominated Turkish politics for 15 years, says the powerful new executive presidency is vital to drive economic growth, ensure security after a failed 2016 military coup and safeguard the country from conflict in Syria and Iraq.

He took the oath to office Monday in parliament, following last month’s elections where he garnered 52.9 percent of votes. 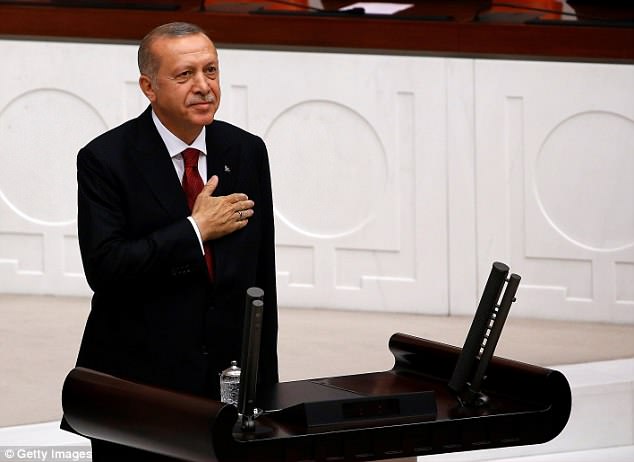 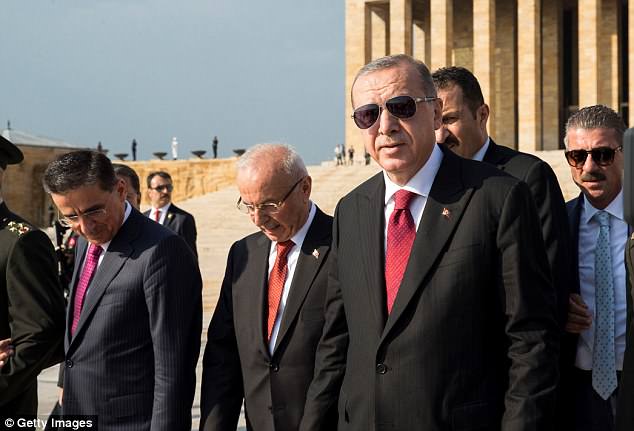 The snap elections ushered in the new system that ends parliamentary governance and boosts the powers of the formerly ceremonial presidency.

Previously he had only been allowed to issue decrees under state of emergency legislation brought in after the failed coup in 2016.

‘As president, I swear upon my honour and integrity, before the great Turkish nation and history, to work with all my power to protect and exalt the glory and honour of the Republic of Turkey,’ Erdogan told parliament as he took the oath of office. 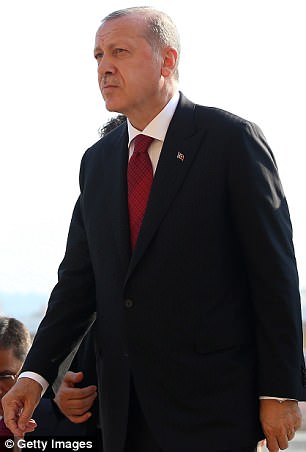 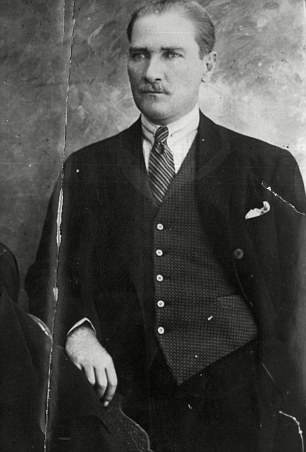 Who was Mustafa Ataturk? 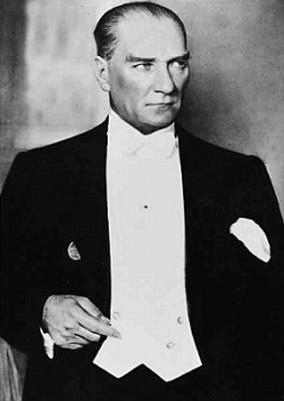 Mustafa Ataturk pictured in the 1930s at the height of his power. He died in 1938

Ataturk was an army officer who came to prominence after leading the Turks to victory during the Battle of Gallipoli during the First World War.

Following the end of the war, Ataturk became leader of the Turkish National Movement which opposed the partition of Turkey by Allied powers.

He fought in, and subsequently won, what became known as the Turkish War of Independence – defeating Allied troops sent to occupy parts of the country.

Ataturk then oversaw the abolition of the Ottoman Empire and the establishment of the Turkish Republic in its place.

His reforms saw the creation of a modern, democratic, secular nation that granted free education to children and gave women the vote ahead of many western democracies.

Ataturk, who was born Ali Rıza oğlu Mustafa, was granted his surname – which means ‘father of Turks’ – by parliament in 1934.

Following his death in 1938 the presidency became largely symbolic and ceremonial, with the holder assuming the role of head of state.

But under Erdogan that role has expanded to encompass the everyday political functioning of the country.

As Erdogan was sworn in on Monday with sweeping new powers that effectively make him the head of the judiciary and head of the executive.

The introduction of the new presidential system marks the biggest overhaul of governance since the Turkish republic was established on the ruins of the Ottoman Empire nearly a century ago.

That has led many to compare Erdogan to Mustafa Ataturk, the founder of modern-day Turkey, who served as the country’s first president from 1923 until 1938.

Since Ataturk the position of President has been largely ceremonial but under Erdogan it will now become central to Turkey’s politics.

The post of prime minister has been scrapped and the president will now be able to select his own cabinet, regulate ministries and remove civil servants, all without parliamentary approval.

Erdogan’s supporters see the changes as a just reward for a leader who has put Islamic values at the core of public life, championed the pious working classes and overseen years of strong economic growth.

Opponents say the move marks a lurch to authoritarianism, accusing Erdogan of eroding the secular institutions set up by modern Turkey’s founder, Mustafa Kemal Ataturk, and driving it further from Western values of democracy and free speech.

Erdogan is expected to name a streamlined cabinet of 16 ministers on Monday evening after a ceremony at the presidential palace for more than 7,000 guests, including Venezuelan President Nicolas Maduro, Russia’s Prime Minister Dmitry Medvedev and Hungarian Prime Minister Viktor Orban.

No major Western leader was included on a list of 50 presidents, prime ministers and other high-ranking guests published by state news agency Anadolu. 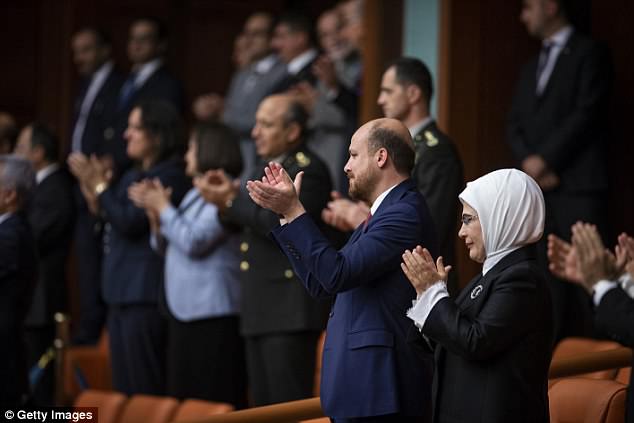 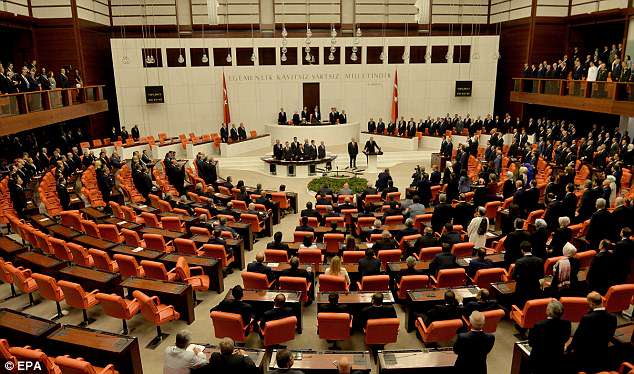 Erdogan won 52.9 per cent of the vote at a recent general election, handing him the mandate to push ahead with political reforms

Investors were waiting to see whether cabinet appointees would include individuals seen as market-friendly, and particularly whether Mehmet Simsek, currently deputy prime minister, would continue to oversee the economy.

‘For the cabinet appointments in the past several years, the most important issue has been the presence of the current deputy prime minister, Mehmet Simsek,’ said Inan Demir, a senior economist at Nomura International.

The lira, which is down some 16 per cent so far this year and has been battered by concern about Erdogan’s drive for lower interest rates, firmed to its highest level since mid-June before falling back to stand at 4.61 against the dollar at 1350 GMT.

Erdogan has described high interest rates as ‘the mother and father of all evil’, and said in May he would expect to wield greater economic control after the election.

‘We will take our country much further by solving structural problems of our economy,’ he said on Saturday, referring to high interest rates, inflation and the current account deficit.

Inflation surged last month above 15 per cent, its highest level in more than a decade, despite interest rate hikes of 500 basis points by the central bank since April.

After 15 years in office that have transformed his country, President Recep Tayyip Erdogan takes up a new mandate with expanded powers, aiming to establish himself alongside founder Mustafa Kemal Ataturk as the leading figure of modern Turkish history.

Erdogan, 64, has in his political career overcome a stint in prison, mass protests and even a bloody coup attempt to emerge as Turkey’s uncontested leader, first as premier and then as president from 2014.

He has freed up constraints on religion in the officially secular but overwhelmingly Muslim state, overseen a vast programme of infrastructure building he calls his ‘crazy projects’ and implemented a more assertive foreign policy. 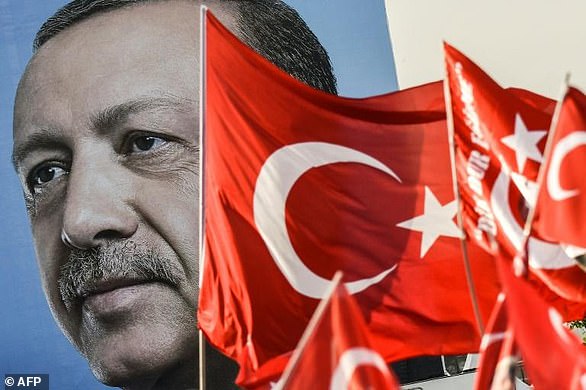 But detractors accuse Erdogan of leading Turkey down a dangerous path to authoritarianism reminiscent of the Ottoman Sultans, pursuing an imperial foreign policy and reckless handling of the economy.

In any case, Erdogan is here to stay, being sworn in Monday for a second presidential term under a new system that gives him enhanced powers and could see him stay in office to 2028.

If there was a global contest for winning elections, Erdogan would see himself as the undisputed — and undefeated — heavyweight champion of the world.

In the one-and-a-half decades since his ruling party came to power, Erdogan has taken part in 14 elections — six legislative polls, three referenda, three local elections and two presidential votes — and won them all. 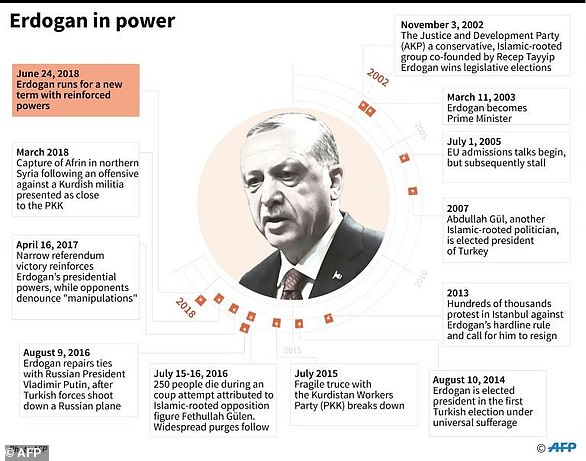 Known to his inner circle as ‘beyefendi’ (sir) and to admirers as ‘reis’ (the chief), Erdogan prides himself on being able to woo doubters with his indefatigable campaigning.

His only setback – so far – came in June 2015 elections when the AKP won the most votes but lost its overall majority for the first time.

But Erdogan swatted away the prospect of a coalition, saying such governments belonged to the days of ‘old Turkey’. He called new elections in November 2015 where the party’s majority was restored.

Erdogan pressed on with an April 2017 referendum on a new constitution that abolishes the office of prime minister and that critics said resembled an autocracy, but eked out a relatively narrow win.

He won 52.6 percent of the vote in the presidential elections last month, higher even than his result from the 2014 polls.

Born in the working-class Istanbul harbour district of Kasimpasa but brought up near the Black Sea, Erdogan gained prominence in the nascent Islamist political movements that were challenging secular domination, becoming a popular mayor of Istanbul in 1994. 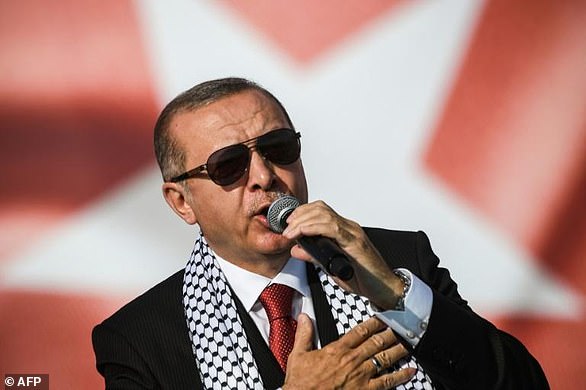 In one and a half decades since his ruling party came to power, Erdogan has taken part in 12 elections and won them all

His term was cut short when he was convicted and then jailed for four months for inciting religious hatred when he recited an Islamist poem. But this only magnified his profile.

Founding the AKP after the previous Islamist party led by his mentor Necmettin Erbakan was banned, Erdogan spearheaded its 2002 landslide election victory and became premier less than six months later.

Erdogan’s signature early achievements included a series of reforms that gladdened the EU, including abolishing the death penalty and beginning a peace process with Kurdish militants.

Mass protests in summer 2013 over plans to turn an Istanbul park into a shopping mall marked the start of a more divisive era as Erdogan came out fighting, dismissing the protesters as ‘hooligans’.

Tensions further increased later that year when a corruption scandal broke implicating Erdogan’s inner circle. The allegations enthralled his opponents but his supporters rubbished the claims.

The accession process to join the EU ground to a halt – with Erdogan complaining Ankara was being ‘kept waiting at the door’ – and in 2015 the peace process for the Kurdish-majority southeast collapsed.

In its early days the AKP, lacking allies and experience, forged an alliance with Islamic preacher Fethullah Gulen, who moved to permanent exile in the US in 1999 yet built huge influence in Turkish society. 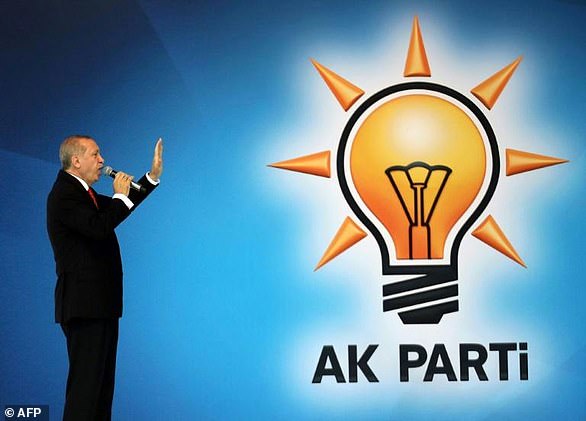 Gulen’s former allies blamed him for masterminding the July 15, 2016 coup bid by a renegade army faction, charges he denies.

The president, on holiday in the Aegean, appeared on the FaceTime app on live TV to urge supporters out onto the streets, before returning in triumph to Istanbul and describing the events as a ‘gift from God’.

The coup bid marked a watershed moment in Erdogan’s rule with some 77,000 arrested in the unprecedented purge that followed, further increasing tensions with the West.

And his increasingly pugnacious style has alienated some former allies such as predecessor Abdullah Gul, a co-founder of the AKP.

Family is key for Erdogan and one of his closest confidants is his energy minister and son-in-law Berat Albayrak, the husband of his eldest daughter Esra.

His younger daughter Sumeyye plays a key role in a women’s organisation but, in contrast, his two sons are less prominent.