Ankara:Turkish President Recep Tayyip Erdogan on Wednesday called early elections for June, meaning a new political system that will increase the powers of the president will take effect a year earlier than scheduled.

After a meeting with Devlet Bahceli, the leader of Turkey's main nationalist party, Erdogan announced that elections originally scheduled for November 2019 will now be held June 24. 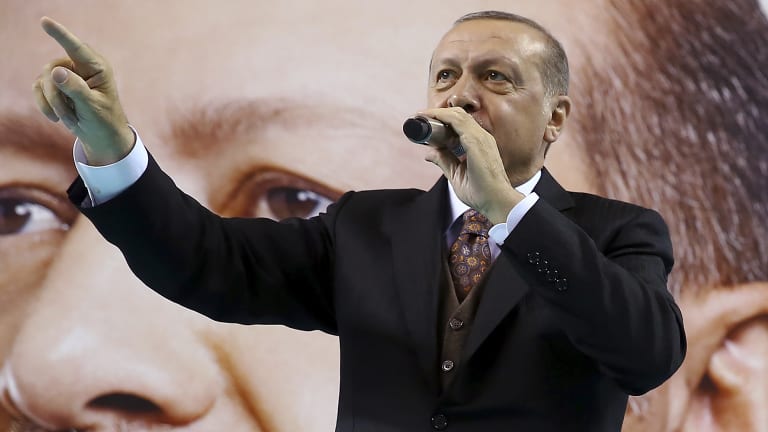 Turkish President Tayyip Erdogan said elections will be held on June 24, more than a year earlier than planned.

He said the new system needs to be implemented quickly in order to deal with a slew of challenges ahead, including Turkey's fight against Kurdish insurgents in Syria and Iraq.

Turkey is switching from a parliamentary system to a presidential system that abolishes the office of the prime minister and decreases the powers of the parliament, following a narrowly approved referendum last year. The changes take effect with the next election.

"Be it the cross-border operations in Syria, or incidents of historic importance centred in Syria and Iraq, they have made it imperative for Turkey to overcome uncertainties quickly," Erdogan said, in apparent reference to the aspirations for independence by Kurds in both countries.

Erdogan said: "Switching to a new system of government has increasingly gained urgency so that decisions regarding our country's future can be made and implemented with greater strength."

The snap elections were called a day after Bahceli, the leader of the Nationalist Movement Party and an Erdogan ally, made a surprise call for an early election in the summer.

Bahceli argued there's "no point in prolonging this any longer," citing efforts by unnamed groups to foment chaos in Turkey.

Erdogan, who has moved to further tighten his grip on power since a failed coup attempt in 2016, needs a 51 percent majority to be re-elected in the first round of the presidential election. Earlier this year, his ruling conservative, Islamic-rooted Justice and Development party formed an election alliance with Bahceli's MHP.

Nationalist sentiment is running high over Turkey's recent military operation in Syria, which ousted Syrian Kurdish forces from a northern enclave. Ankara has labelled the Syrian Kurdish fighters as terrorists because of their affiliation with outlawed Kurdish rebels fighting inside Turkey.

Although caught off-guard, opposition parties said they were ready for the early election.

Last month, Erdogan's ruling Justice and Development Party, with the help of MHP votes, passed a set of changes to the country's electoral laws that critics said are aimed at helping Erdogan consolidate power and could lead to election fraud.

In a related development, Turkey's parliament was to vote Wednesday on whether to prolong a state of emergency that was declared after the failed coup. It allows the government to rule by decrees, often bypassing parliament. The decrees have allowed the government to close down media outlets and non- governmental organisations.

Parliament was widely expected to extend the state of emergency for a seventh time despite calls at home and abroad for it to end.

The European Union, which Turkey seeks to join, says the country is backsliding on bringing its laws in line with EU standards and has called for the country to lift its state of emergency. Last month, a UN report concluded that Turkey's state of emergency had led to human rights violations, including arbitrary detentions and dismissals, torture and ill-treatment.

Turkey's main opposition party accuses the government of misusing its emergency powers to erode democracy and arrest government critics. Its supporters have staged sit-in protests this week across Turkey to demand an end to the emergency declaration.

The government has asked Parliament to extend the emergency decree, arguing that security threats from a movement led by US-based cleric Fethullah Gulen, whom Turkey accuses of masterminding the coup, have not abated. It also cites Turkey's continued struggle against Kurdish rebels and other groups.

Gulen has denied any ties to the failed coup.