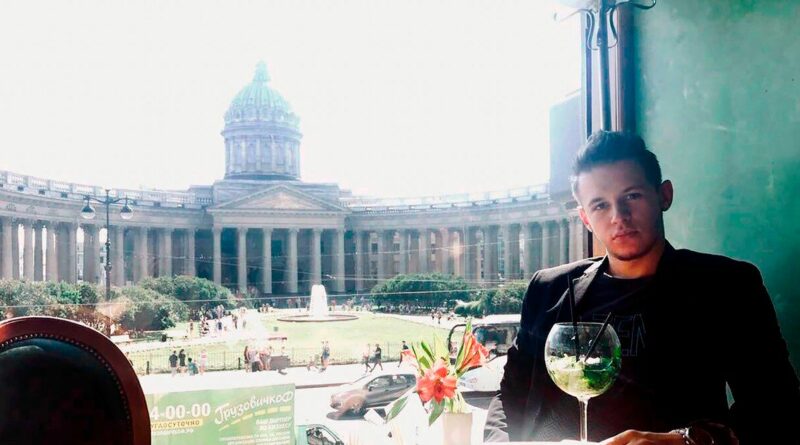 A twisted boyfriend killed his Russian model girlfriend before pretending to be on a date with her on Instagram.

Dmitry Korovin, 23, has confessed to strangling Vladimir Putin critic Gretta Vedler, also 23, and stuffing her body into a suitcase in February last year.

After murdering Gretta, Korovin unbelievably logged into her social media accounts to upload snaps of him so no one would suspect she had died.

While Gretta's followers were led to believe she was enjoying romantic evenings out, her lifeless corpse was in fact rotting inside the boot of an abandoned car.

Her murderer made the disturbing confession to interrogators that he casually shared a hotel room with his dead girlfriend for three whole nights.

Korovin shoved Gretta's body into a brand new suitcase which he drove 300 miles south from Moscow to the Lipetsk region.

During his interrogation he demonstrated how he brutally killed Gretta with his bare hands.

The sly Instagram updates Korovin shared from Gretta's account to suggest she was still alive may have fooled some of her followers but a close friend soon grew suspicious.

Evgeniy Foster, a blogger from the Ukrainian city of Kharkiv which has been shelled by advancing Russian troops, clocked that not all was right with Gretta.

Unable to report his suspicions from Ukraine, Evgeniy asked a pal in Moscow to file a missing persons case.

Taking their concern seriously, the authorities launched a search party for the model which led to the eventual grisly discovery of a taped up suitcase inside an abandoned Chevrolet.

Russia’s Investigative Committee has now released a video where Korovin confessed and demonstrated how he killed Vedler.

Although considered unrelated to her death, Gretta publicly hit out at Russian President Vladimir Putin on social media.

She wrote on social media: "Given the fact that Putin went through a lot of humiliation in childhood, he could not stand up for himself due to his [slight] physical form, it is not surprising that he left after law school and joined the KGB,' she wrote.

"Such people are timid and fearful from childhood, afraid of noise and darkness, strangers, so traits such as caution, restraint, and lack of communication are developed early in their character.

"I can only assume, in my opinion, a clear psychopathy or sociopathy is seen in him."