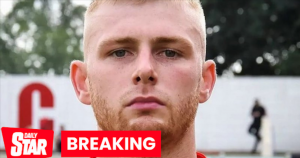 Two men have been charged with the murder of Cody Fisher, who was fatally stabbed at a nightclub in Birmingham on Boxing Day.

West Midlands Police have announced that Kami Carpenter, aged 21, and Remy Gordon, aged 22, have this evening been charged with murder and affray.

The pair – both from Birmingham have been remanded into custody to appear before Birmingham Magistrates Court on Monday (Jan 2).

A 22-year-old man also arrested on suspicion of Cody’s murder has been released on bail while enquiries continue. Cody – who died aged 23 – was stabbed on the dance floor of the Crane nightclub in Digbeth, and the venue has since had its licence suspended.

"However, we're still really keen to hear from anyone with information who has not already spoken to us. Every piece of information helps our investigation."

Cody, a non-league player who taught football at a primary school, was stabbed at 11.45pm on Boxing Day.

Staff at Woodrow First School in Redditch, near Birmingham, where Cody coached children, said they were devastated by the death of the “bright, friendly and talented young man”.

Cody’s girlfriend Jess Chatwin called him “my whole world, the love of my life, my best friend”, adding: “I don’t know how I’m going to do life without you.”

Bromsgrove Sporting FC will pay tribute to the left-back in a match against Stratford Town on January 2. Cody played for both clubs.

Bromsgrove chairman Mike Burke said: “There’s nothing we can say can make the family feel any better but we can just send our thoughts out to them at this really sad time.’’

Former Stratford Town manager Dean Holdsworth said: “It is very difficult to comprehend that this sort of news could come out about one of your friends, one of your family and one of your players.”