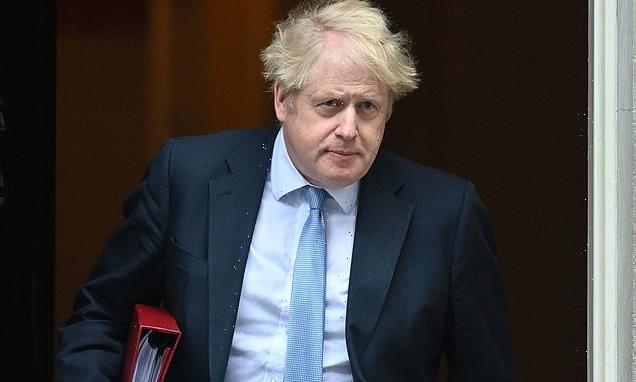 At least two cabinet ministers will withdraw support for the Prime Minister if he is handed a fixed penalty notice in relation to Covid rule breaches, it has been reported.

Boris Johnson stonewalled for 10 minutes on Partygate in an awkward interview, refusing to say whether he will quit if police fine him.

The PM squirmed as he was repeatedly grilled by the BBC’s Sophie Raworth on the controversy – insisting he ‘can’t comment about a process that is under way’.

Despite there being no apparent legal barrier to speaking on the issue, Mr Johnson said: ‘There is simply not a bean I can tell you about that.’

Mr Johnson handed a legal questionnaire to police on Friday regarding claims that lockdown-busting parties were held in Downing Street.

He is thought to be arguing that he believed all the functions he attended were essential for work, but No10 has insisted the document will not be made public. 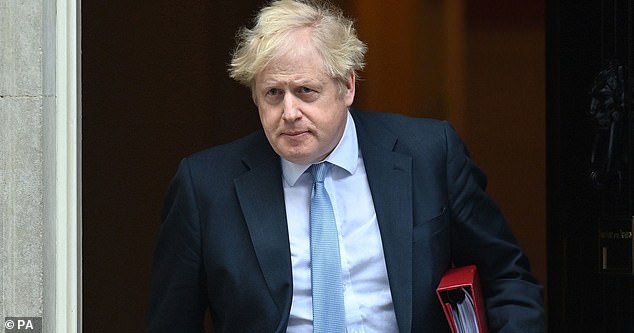 At least two ministers will withdraw support for the Prime Minister Boris Johnson if he is handed a fixed penalty notice by police in relation to Covid rule breaches, it has been reported

The government has also urged police not to publish hundreds of pictures handed to an official civil service probe into the scandal – allegedly including one of the premier drinking beer.

However, Mr Johnson has committed to revealing if he gets a fixed penalty notice (FPN).

And while some of his allies, including James Cleverly, have spoken out and said he should not be forced to resign if he is found to have broken the law, reports suggest not everyone is of that opinion.

According to the Times newspaper, two ministers have said the Prime Minister’s position will be untenable if he is found to have breached lockdown laws and is fined by the police.

One source told The Times: ‘If he gets an FPN he’ll have to go. How can you have a prime minister who has been found guilty of breaking the law?’

A minister and close ally of a second cabinet member also told the newspaper: ‘If the Met’s conclusion is effectively that he broke the regulations then it makes his position extremely difficult.

‘It’s going to be very difficult for him to stay, especially if it’s for a party in the No 10 flat.’

The Times reported that he will be expected to appeal an FPN if he is handed one by the Met in an attempt to draw out the process and ‘to kick it into the long grass’.

In an interview with BBC One’s Sunday Morning Programme recorded yesterday at the Munich security conference, Mr Johnson was asked if he could understand many people’s doubts about his explanations of gatherings held in No10.

He repeatedly said there was ‘nothing’ he could offer on the matter until the police inquiry was completed.

Mr Johnson said: ‘Nothing would give me greater pleasure than to give you full and detailed answers on all this stuff. I genuinely can’t because we’ve got a process under way – there is not a jot I can say until it is done.’

Told the public found some of his excuses for attending Downing Street gatherings ‘implausible’, particularly the ‘bring your own booze’ event in May 2020, the Prime Minister replied: ‘You’re just going to have to wait until the process is complete – there is literally not a bean I can tell you about that, as much as I would like to.’ 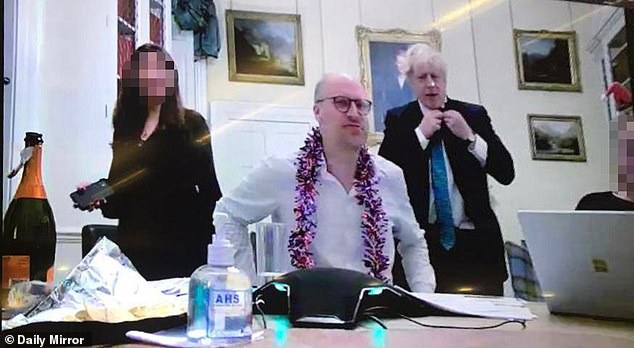 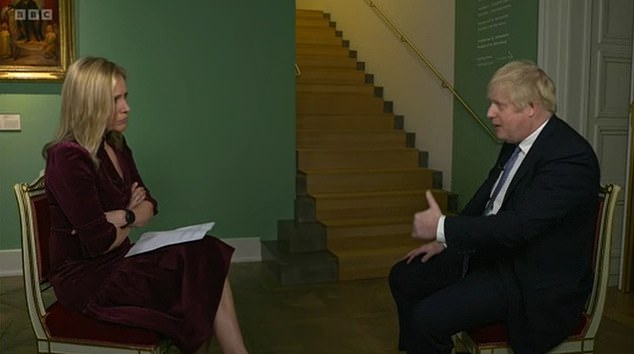 On the BBC One’s Sunday Morning show recorded at the Munich security conference, Mr Johnson repeatedly said there was ‘nothing’ he could offer until the inquiry is completed

‘I will be saying a lot more about it in due course.’

Scotland Yard is investigating 12 events allegedly attended by Government figures during lockdowns, including as many as six that the Prime Minister is reported to have attended.

Officers involved with Operation Hillman, which is examining whether Covid restrictions were broken in Downing Street and across Whitehall, sent formal questionnaires to approximately 50 people as they look into the details of alleged Covid rule-breaking.

Speaking to Sky on Trevor Philips on Sunday, Foreign Office minister James Cleverly said he wanted to Mr Johnson to stay in post.

‘I don’t think what the country needs at the moment is a vacuum at the centre of Government when we are dealing with our recovery from Covid, the accumulation of Russian troops on the Ukrainian border, making sure that the the health service is able to deal with the sad, the unfortunate but nevertheless obvious, backlog that’s been created by Covid,’ he said.

‘That’s what the country needs. That’s what I believe the Prime Minister should be doing.’

Asked if that could be taken as Mr Johnson should not resign if he gets a fine, Europe Minister Mr Cleverly said: ‘That is exactly how you should be taking it.’