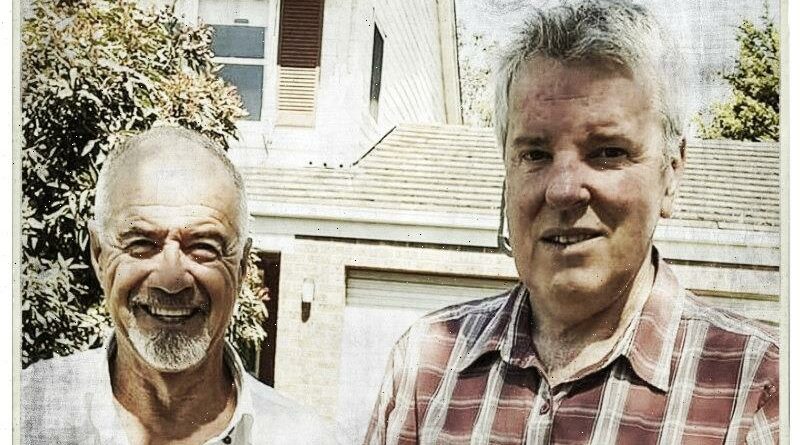 Constable Rod McDonald was lying on the ground, wounded, frightened, bewildered and bloodied.

Only gut instinct and reflexes had saved his life, but this was hardly a moment for reflection. He felt boiling anger towards the man who had ambushed him and was now attempting to escape.

It was just after 9pm on October 12, 1982, and there is not a day when he is not reminded of how his life changed in those split seconds. Nearly 40 years later, he feels he remains Victoria Police’s forgotten victim, with the investigation into his shooting allowed to lapse and the offender never formally identified.

A series of minor but annoying factory burglaries in Oakleigh meant the local afternoon divisional van crew was briefed to check likely targets.

Rod McDonald. He was shot and wounded on October 12, 1982 by a factory burglar, believed to be Pavel Marinof.

McDonald was walking along Winterton Road, shining his police-issue torch at factory windows looking for breaks, when a passerby yelled to look behind.

“As I turned I saw a person crouched under some bushes … I saw him bring a handgun up pointing directly at my face, he just fired, and I simultaneously threw my hands instinctively in front of my face.” Effectively he caught the bullet before it smashed into his skull.

“The impact knocked me from my feet and back against the factory wall, and then I fell to the ground, both my hands searching for the bullet hole I knew was in me but didn’t know where.”

The wounded usually try to crawl to safety, but McDonald chose a different option.

“I heard him get up and run – my anger took over from my fear. I drew my .38 Smith & Wesson and fired two instinctive shots in his direction. I chased him to the end of the building, where he disappeared into the dark bushes.

“Then I saw my firearm was glistening bright red in the street light, and I saw my right thumb shredded, pieces hanging over the hammer and blood spraying like a spray gun.”

The bullet had hit his right thumb, smashed the torch he was carrying, entered his left wrist and travelled along his arm, lodging just under the skin near his elbow.

When his partner, who had been searching nearby factories, found him, the laconic McDonald said: “That’s stuffed my piano playing.”

The gun was a 9mm Browning pistol – not the sort of weapon usually carried by a factory burglar. But this was no average burglar, although it would take police nearly three years and several casualties to grasp the dangers.

An informer gave one of the investigators the name of a possible suspect: local factory worker Pavel “Mad Max” Marinof.

When police searched his house they found a shooting range in the basement, but Marinof had disappeared. He was a Bulgarian army deserter, a dangerous gun nut and, in all probability, an underworld firearms dealer. And he would return with a bloody vengeance. 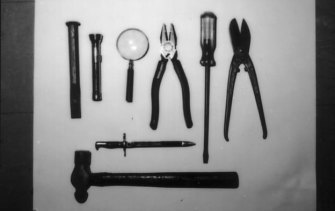 The burglar’s kit, dropped at the scene.

After McDonald was shot the burglaries stopped for 18 months and then began again. The fit burglar would hit up to 12 factories a night, beginning around 10pm, to pilfer petty cash and small items.

His patch was an industrial triangle including Oakleigh, Clayton and Moorabbin, and although McDonald was shot in that zone, police seemed reluctant to link these burglaries with the earlier ones.

Which is why, when Cheltenham police decided to stake out likely targets, they didn’t know the offender would almost certainly shoot to avoid capture. They were setting themselves up to be ambushed.

McDonald was told his best option for recovery was to have his thumb replaced with the big toe from his right foot. He had his doubts and even as he was about to be wheeled into surgery thought about getting up and walking out. But it was too late.

Presented with the prestigious Victoria Police Valour Award, he returned to work around the time the burglar returned to his line of business.

“I was never the same. I fought the nerves and the fear that crept into certain situations and eventually succumbed to it,” he says.

He took medical retirement, then after physical and psychiatric treatment returned to policing for a further 12 years, although the dark cloud of the shooting refused to lift.

In late May 1985 local police started their operation to trap the burglar. Rather than patrol his beat, giving him the chance to hide, they would wait in likely spots for him to show his head.

On June 18, Sergeant Brian Stooke and Senior Constable Peter Steele decided to pull over a yellow Ford Cortina. It was in the factory area of Keys Road, Cheltenham, just before midnight – the right time and the right place for their man. 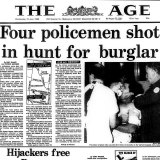 While they searched the car the driver bolted, and when the police gave chase he turned and started firing, hitting Stooke and then Steele in the shoulder. He returned to Stooke, lying on the wet road, and shot him three more times, leaving him a paraplegic.

In the immediate search for the gunman two more police, Sergeant Ray Kirkwood and Constable Graham Sayce, were shot. Sayce was lucky to survive after a bullet grazed his head and shattered his car’s headrest. Soon after, Senior Constable Gary Morrell, a dog handler, was shot in the hand. The bullet would have entered his chest if not for his ballistic vest.

Again Marinof disappeared, this time for eight months, until the search centred on a property at Wallan.

Two Major Crime Squad detectives, John Kapetanovski and a different Rod MacDonald, followed a panel van that left the property and headed along the Hume Highway. They were not certain the driver (who was wearing a wig) was Mad Max.

As he was heading into Melbourne, where they might lose him, they decided to pull him over.

Armed with shotguns, they approached cautiously, keeping their guns pointed down as they could not be certain he was their target.

They ordered him to place his hands outside the door and just as he seemed to be complying he started firing, hitting Kapetanovski in the shoulder and hand and MacDonald in the chest.

In a replay of the shooting of our first Rod, Kapetanovski threw up his arms to shield himself. The first bullet passed through his chest into the bone of the right upper arm, while the second was aimed directly between his eyes.

That shot hit the left hand and travelled from the top of the palm through the inside of the middle finger, smashing three bones and destroying the top joint. It was enough to deflect the bullet, which only creased his right eyebrow. 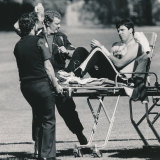 February 25, 1986: Rod MacDonald is stretchered from a Victoria Police helicopter after the shootout wth Marinof.Credit:Jim McEwan

“It’s hard to believe, but it was almost slow motion,” Kapetanovski told me. “I could see the bullet heading towards me.”

Badly wounded, second Rod fired his shotgun through the rear windscreen as Marinof drove to escape. The car slowed, veered into a paddock and stopped. The gunman was dead.

The investigation into the 1982 shooting of Rod McDonald stopped with the death of Marinof because everyone knew he was the gunman. The trouble was that no one actually finished the file.

McDonald remains angry that his case remains unresolved. “They have failed me.” Every time the victims of Mad Max are listed without him, he feels like the forgotten footnote in a terrible chapter of policing history.

Now 75, he wanted to leave his dark memories behind and is living a simple life in Siam Reap, Cambodia.

Former colleague Wayne Rotherham took up the cause and lobbied for a review. One of the key pieces of evidence was the 9mm bullet that hit Rod (One). If it could be matched with the gun used to shoot Rod (Two) and Kapetanovski, it would prove the case.

But the Rod (One) bullet had been turned into a charm necklace for McDonald’s daughter and the years had worn away the ballistic marks needed for comparison. 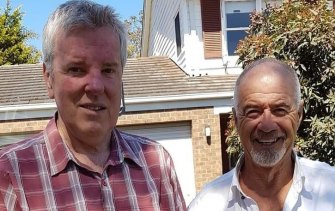 Rod McDonald (right) with Rod MacDonald. Both believed to have been shot by Marinof.

After the review, Detective Superintendent Peter Brigham wrote to McDonald: “It is not possible to prove ‘beyond doubt’ that Marinof was the offender … Considering the nature of the crime that you were attending, and Marinof’s MO and firearms proficiency, I believe it is ‘highly likely’ that he was the offender.”

Rod (Two) believes Rod (One) was shot by Marinof: “The stance and accuracy [of the offender] is identical. He shot in the same way. It would mean so much to him [Rod One] for it to be formally acknowledged.”

Earlier this year, undercover operative Rob Robertson was presented with a Valour Award for an operation 43 years earlier where he persuaded a gunman not to shoot three police forced into a dumpster at the Victoria Market.

The award identifies the gunman as the notorious armed robber and escapee Russell “Mad Dog” Cox, although Cox was never arrested, questioned or charged with the offence.

McDonald’s citation ends with the words: “Despite an intensive search, the offender was never located.”

Would it really be too hard to insert “believed to be Pavel Marinof”? It would make the world of difference to a police hero who gave so much and just wants history to reflect the truth.