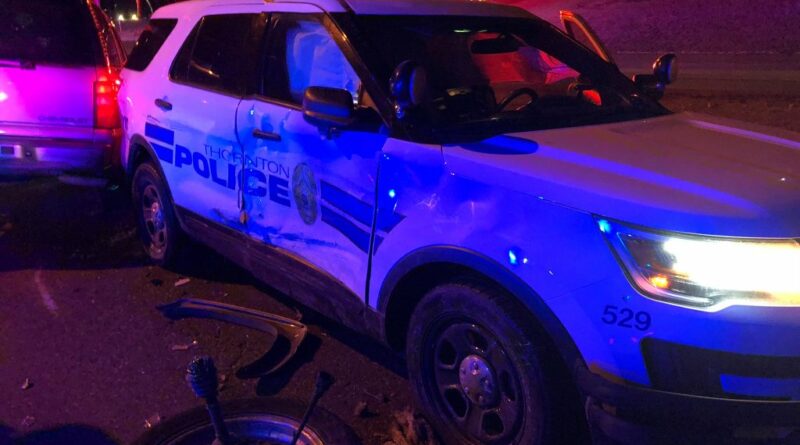 Two Thornton police officers who fired their weapons at an armed suspect who pointed a gun at them will not face criminal charges, according to the Adams County District Attorney.

On April 9, officers Zac Crowe and Lindsay Hinton fired at Raymond Quintana after the suspect crashed a vehicle while eluding police, according to a decision letter on the shooting released Thursday by the DA’s office.

Quintana, as he fled on foot, pointed a handgun at the officers, who opened fire, according to the letter. Hinton fired one shot and Crowe fired five.

The officers were pursuing Quintana who was suspected of stealing coins from an apartment complex laundry and pointing a gun into the face of a private security officer who tried to intervene. The vehicle Quintana was driving crashed near East 115th Avenue and Colorado Boulevard.

Hinton and Crowe, the first officers to arrive at the crash, parked their patrol cars surrounding the vehicle on Colorado Boulevard as traffic passed. The officers got out of their vehicles with guns drawn. Quintana got out of the crashed vehicle, with a gun in his right hand, and stood on top of the hood. “Officer Hinton yelled, ‘He’s got a gun!’ Within seconds, both Officers Hinton and Crowe fired their weapons at the suspect,” the letter said.

Crowe told investigators that Quintana pointed a gun directly at Hinton, according to the letter. Earlier, in the apartment complex before the vehicle pursuit, Quintana had pointed a gun at Crowe during a foot chase.

The officers’ shots appeared to have missed Quintana, who jumped a fence and then eluded police.

On April 14, Thornton and Westminster police served a search warrant for Quintana at a Westminster apartment. After about three hours of negotiations for his surrender, police entered the apartment and found Quintana dead. “Mr. Quintana took his own life,” the letter said.

An autopsy revealed that Quintana had suffered a non-lethal perforating gun shot wound to the leg, likely from the officers’ gun fire on April 9 after the crash.

“In this case, the involved police officers were initially engaged in the course of their
duties to search for and apprehend a suspected coin thief who threatened a security guard with a
handgun,” the letter said. “Consequently, the officers’ pursuit of Mr. Quintana was for multiple felonies involving conduct including the use or threatened use of deadly physical force.

“Based on the evidence presented and the applicable Colorado law, there is no reasonable
likelihood of success of proving the elements of any crime beyond a reasonable doubt as it
relates to the law enforcement officers involved in this incident. Therefore, there will be no
criminal charges filed against these officers.”