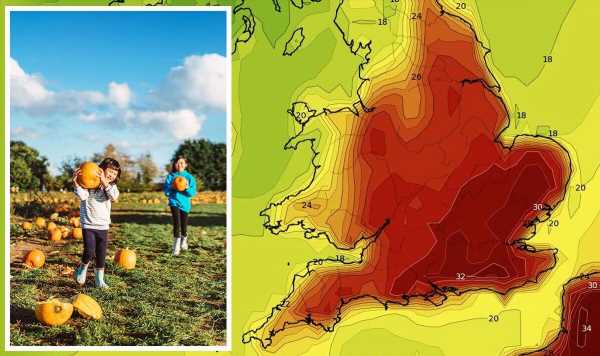 This year’s record-breaking heatwave where temperatures skyrocketed to 40.3C will not be forgotten in a hurry. An increasingly hot summer followed and even a mild October, with no signs of a winter chill yet on the cards. While sunseekers have been in for a treat this year – the crops have wilted and the river levels have gone down. A drought was declared in several regions and despite a little uptake in rainfall, there’s still a deficit with environmentalists now predicting 11 regions will remain on alert until at least 2023.

One of summer’s heatwave casualties has been pumpkin crops – with families flocking to the open fields in the run up to Hallowe’en to find the selection not as plentiful as years gone by. It appears pumpkins of all sizes have become more rare this year.

Jim Dale, a senior meteorologist for British Weather Services was, of course, unable to comment on the state of the UK’s agriculture – but he was able to shine a light on the detriment caused by climate change.

Speaking to Express.co.uk he said: “Although I’m not an agriculturist I would venture yes almost certainly. Either the heat or the lack of water or indeed both, it is climate change at work.”

And it appears others from the farming industry are also in agreement – with ITV quoting Charlie Eckley from the Pumpkin Moon farm in Maidstone, Kent, as saying: “Due to it being so dry, its only producing one fruit per plant… so we’re getting really lovely fruit, but not as much quantity.”

Some reports suggested pumpkins are not only lacking, but have had stunted growth too. It’s understood the average pumpkin size this year has not been as big as 2021, for example.

While the supply has not been low enough to stop the Hallowe’en ritual,  farmers will be fearing for next year if the mercury continues to increase and the lack of rainfall continues over winter and into next spring.

Just last month the National Drought Group met and set out further action which is needed over winter to help water supplies after a dry and extremely hot summer.

It said: “Although essential supplies of water remain safe, and many areas of England have experienced rainfall in recent weeks, reservoirs across the country continue to be at lower levels than usual. Nearly half of reservoirs were classed as exceptionally low for the time of year with total reservoir stocks at 52 percent of total capacity on September 20.”

Its report dubbed September rainfall as having “limited positive impact on water levels”, with a whopping six months of below average rainfall doing all the damage.

“Very dry soils mean that rainfall will take longer to replenish groundwater and reservoir water levels,” it said. A total of 11 areas in the UK remain in a drought.

It said the remaining areas classed as being in ‘prolonged dry weather’ include Greater Manchester, Merseyside and Cheshire, the North East and most recently Cumbria and Lancashire, which moved to prolonged dry weather status in the middle of September.

“Without average rainfall over autumn and winter, it is expected that the drought will continue into 2023,” the report added.

DON’T MISS:
Man tows neighbour’s car after they refuse to move it from dad’s drive [REPORT]
Eco-protester confronted by member of the public [REVEALED]
Migrants to share hotels with members of the public [LATEST]

David Dangerfield, Environment Agency director of water, land and biodiversity and chairman of the NDG, said: “When rain falls, it is easy to assume the need to act against drought and prolonged dry weather has passed – but that is not the case. Water pressures on agriculture, wildlife and the environment remain high as we head into the autumn and winter, which is why we must continue to manage water wisely.

“For this year – and indeed the coming decade – significant action must be taken if we are to mitigate the impacts of climate change on our water security. The past summer has been a clear reminder of the need to effectively prepare for weather extremes and how we make the very best use of our water resources.

“Our National Framework for Water Resources sets out clearly what we are doing in the face of a new normal for water and we are determined to continue driving that forward.”