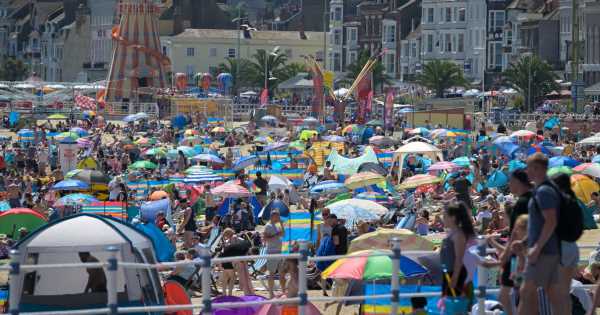 The British summer gets hotter and hotter as new reports indicate temperatures of 43C could be reached, causing "hundreds" of deaths and even melt and "expand" train tracks.

Weather across the country is set to hit extreme highs just after the UK was named hotter than the Maldives, with 32C predicted for tomorrow.

But experts are currently worried that temperatures could soar even higher, hitting 43C on Sunday and "obliterating" the previous hottest day of the year record set in July 2019.

The Met Office reported that Scotland had already marked its hottest day of the year, with a temperature of 27.3C hit in the Highlands of Aberdeenshire.

Warnings from the Met Office say that there is a potential for the rising heat to mark a "record-breaking" moment for British weather.

The Met Office's Steven Keates said: "The potential is there to see exceptional heat, potentially record-breaking. Some modelling output is offering quite alarming temperatures.

"There is some exceptionally hot air which has developed across Spain and France which could come our way.

"It could be something that we’ve never seen before. There’s a good chance of the record being broken. This sort of heat is not going to be particularly welcomed by anybody, except maybe by statisticians."

Keates warned also that the weather was going to offer up "high pollen" and a newfound danger to people young and old.

He added: "It will be dangerous heat, our buildings and infrastructure are designed to cope with that. It will be the vulnerable in society who suffer, the young and the old. There’ll also be high pollen and high UV levels.

Bob Ward, the Policy and Communications Director at the London School of Economics, echoed Keates' warning, saying that the weather could cause "hundreds" of deaths.

Ward said: "This period of high temperatures, we know from past experiences, will unfortunately lead to hundreds of deaths across the country, The Mirror reported.

"The high temperatures during the day and in the evening means that those that are vulnerable are going to be particularly exposed, at least for the next week."

Delays to travel could be caused by the heat also, with a spokesman for Network Rail warning that the weather could cause lines to "expand and sometimes buckle".

They added: "Speed restrictions are likely to be in place in some parts of the network most affected by the hot weather.

"This helps because slower trains exert less force on the track and reduce the likelihood of buckling, avoiding the major disruption caused by a buckled rail."

Bookies refuse to pay out £1,000 winnings from 40/1 Premier League bet over 'mistake'