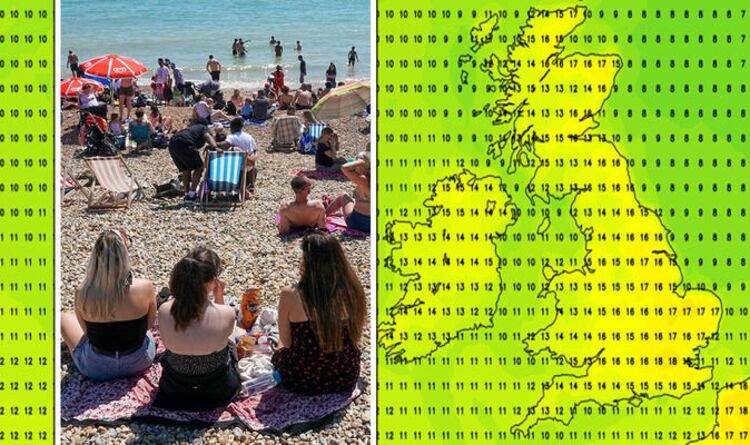 Forecasters are predicting the clement weather to continue with seven days of sunshine for the UK over the next week.

Charts show the warm weather will spread northwards through Thursday and Friday.

The best of the weather this Sunday will be seen in the East Midlands and Yorkshire, with highs of 17 degrees expected.

The Met Office expects parts of London and Cambridge are to enjoy 20 degree heat today, following a warm weekend which saw 20.2 degrees recorded in Kinlochewe, Scotland.

He said: “There will be more spring sunshine to come during the rest of the week.

“High pressure close to the east then becomes increasingly centred over the UK from Wednesday into Thursday and Friday. That high pressure isn’t going anywhere for the foreseeable.”

Mr McGivern added that “variable amounts of cloud” will move across parts of north England and Scotland on Tuesday, bringing a few “light showers” to the region.

However, he said that for most of the day, it will be dry and sunny.

Jim Dale, meteorologist for British Weather Services, agreed that “we are about to enjoy a very pleasant spell of spring weather.

“Warm air is coming in from the continent and will push temperatures through the latter part of the week in parts of the country to 16C, 17C, or even 21C.

“The warmest temperatures are likely to be mid-week, and these will reach the usual culprits, the south and the southeast, and London.

“Apart from some frosty mornings, for the most part it is going to be very spring like over the next few days.”

However, enjoy the sun while it lasts.

Netweather also predicts a frosty end to the month, with most of the country set to dip sub zero next Wednesday morning.

This cold weather will return into the start of April, before slowly picking up again.

The Met Office predicts an “unsettled” start for April, forecasting that “showers are likely to be heavy at times, with hail and thunder.

“Drier and more settled spells are still possible but are likely to be more short-lived.

“Temperatures are most likely to be near average, or perhaps slightly below at times.”

But there are still hopes that April could see a small heatwave that takes the UK into the mid-twenties.

A number of weather experts have predicted high temperatures in April, with some suggesting Britain could be looking forward to highs above 25 degrees for the second half of the month.

The Met Office is yet to predict what temperatures could be like towards the end of the month.