The UK has invited Donald Trump to visit Britain every year of his presidency – despite the US embassy commissioning a poll that revealed the public don’t want a State visit.

Details of Mr Trump’s UK visit are yet to be finalised, but he is expected to stay ‘at least overnight’ in London on July 13, the Daily Mail understands.

It can now also be revealed British officials want him to visit every year he is in office, with his next visit planned for the 75th anniversary of VE Day in May 2020.

This goes against the results of a survey carried out by the US embassy in London, which showed Brits don’t want Mr Trump to meet the Queen or take part in an official State visit. 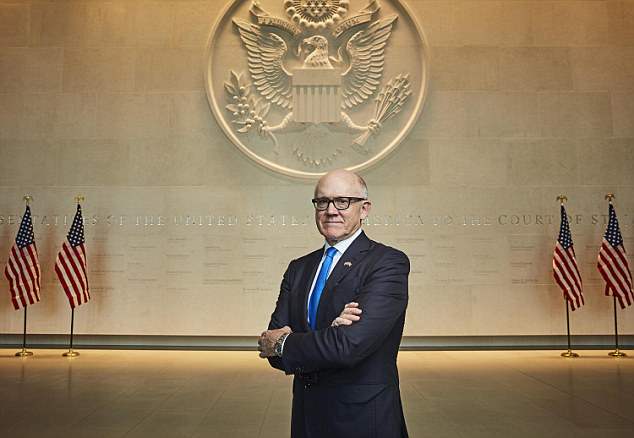 It also reveals senior officials want to invite Trump to the UK every year of his presidency. Pictured: Inside the new embassy at Nine Elms, Vauxhall

A Channel 4 documentary about the inner workings of the new £1.2billion embassy show press aides asking polling firm Survation to find out how the UK feels about a visit from President Trump. 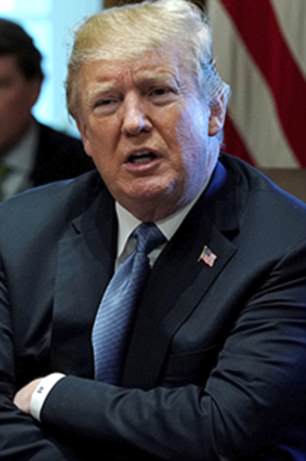 Details of Mr Trump’s UK visit are yet to be finalised, but the President (pictured) is expected to stay ‘at least overnight’ in London on July 13

Sir Mark says: ‘Let’s plan for a series of visits in his first term.’ He suggests the anniversary of VE Day (Victory in Europe Day) in 2020, marking 75 years since the end of the second world war in Europe, as well as next year after Britain officially leaves the EU on 29 March.

He continues: ‘I think for him to be the first big visit after Brexit – this is what I said to HR – to say, you know, this is a Brexit president.’ It is thought he was referring to his former US counterpart HR McMaster.

The exchange suggests Ambassador Johnson and his team want Mr Trump to have a strong presence in the UK, despite the results of their own poll commissioned last year.

Mr Trump cancelled his visit to open the new embassy building at Nine Elms earlier this year, claiming his predecessor Barack Obama had done a ‘bad deal’ by agreeing to move it from Grosvenor Square.

In a controversial tweet he branded Vauxhall an ‘off location’, saying that was the reason he cancelled.

But with protesters determined to thwart his visit with a series of demonstrations they branded ‘a carnival of resistance’ rumours swirled he had been put off.

A Channel 4 documentary about the inner workings of the new £1.2billion London embassy (pictured exterior right) show press aides asking polling firm Survation to find out how the UK feels about a visit from President Trump 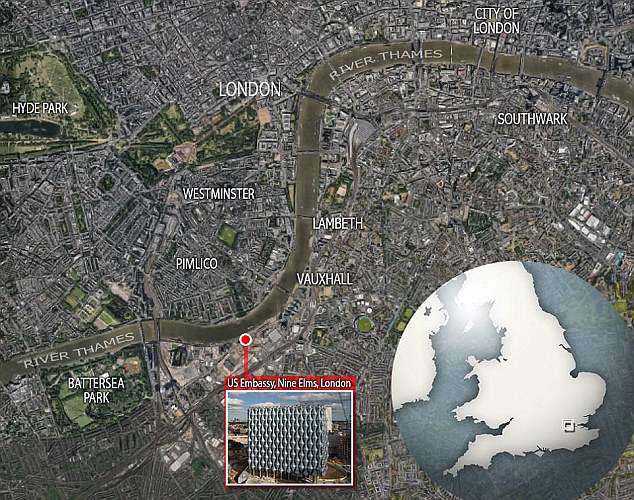 In a controversial tweet last year Trump branded Vauxhall an ‘off location’ for the new embassy, saying that was the reason he cancelled a visit to officially open it

The threat of protests is also believed to be behind the postponement of a state visit first mooted for 2017.

That trip – which would involve lavish ceremonies and a stay with the Queen at Buckingham Palace – has been repeatedly put back, though Number 10 insists the invitation stands.

Senior US officials expect the President to be accompanied by the First Lady, Melania Trump, with plans for the couple to meet the Queen and Prince Philip.

He will arrive on British soil after spending time at a NATO summit in Brussels on July 11 and 12.

Previously it was thought the President may make a flying visit of just a few hours. 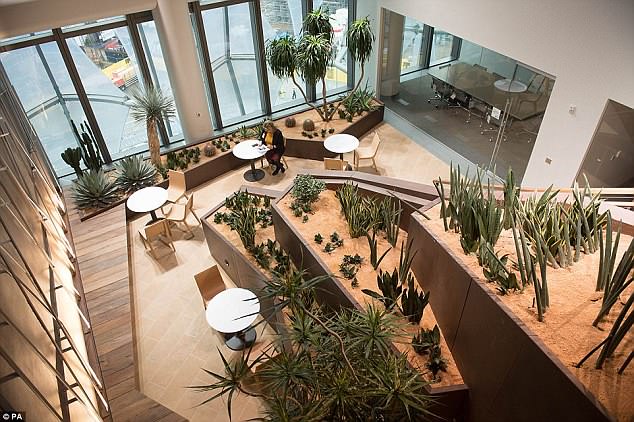 Inside the new US embassy: Thje Canyonlands Garden is pictured, which represents the Grand Canyon and the south west desert landscapes of the US

After promises of 2019 and 2020 visits were revealed, last night Lew Lukens, the US Embassy’s deputy chief of mission, said they were open to further visits.

Asked about the idea of Mr Trump coming for VE Day commemorations, he said: ‘It would certainly be an appropriate occasion for him to come over and mark.

‘We are focused right now on the first visit, which will be in about a month.

‘Beyond that we do think the State Visit will happen next year at same point, but beyond that we haven’t set a date.’

Mr Lukens said that details of the first visit have not yet been finalised as White House planners had been predominantly focused up until now on the meeting between Mr Trump and Kim Jong Un in Singapore.

He said: ‘Normally one month before a visit we would have a pretty good idea at this point of the schedule but we don’t in this case.

‘The team from Washington, from the White House, that travels in advance of a visit to set up the programme was completely wrapped up with the Singapore summit, so they haven’t been here yet.’ 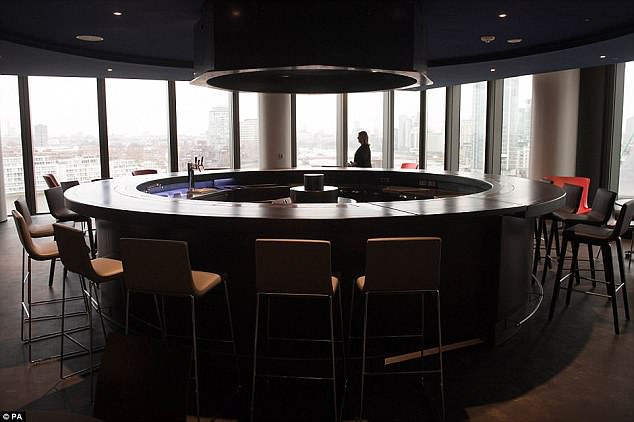 The first episode of ‘Inside the American Embassy’ focuses on the new US ambassador Woody Johnson.

An old friend of the President’s and a business mogul himself, the documentary shows him saying he is ‘very confident about what happens after Brexit’ and that he ‘doesn’t think it’s a major challenge.’

An exchange at the US London embassy, which he opened without President Trump shows him shrugging off comments about the President on social media. 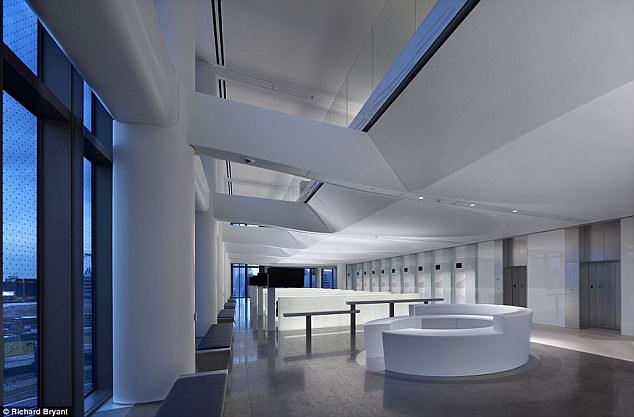 He tells Transport Secretary Chris Grayling: ‘You have to interpret him on what he does, not what he says. And he knows what he’s doing.’

Grayling replies: ‘I think people underestimate people at their peril.’

Inside the American Embassy: Trump’s Man in Britain will air on Channel 4 at 10pm on Monday, June 25.

Brexit will be a huge success – I have no idea why Brits are so defeatist about it, says Trump’s man in London

By John Stevens, Deputy Political Editor for The Daily Mail

Donald Trump’s ambassador to Britain has urged the country to be upbeat about Brexit, declaring it will be a great success.

Robert ‘Woody’ Johnson said he had been ‘startled’ by the ‘defeatist attitude’ towards leaving the EU that he has encountered since arriving in London last summer.

Setting out his positive vision for how the country will thrive without Brussels, the billionaire businessman said he wanted to tell the British people: ‘Don’t be pessimistic and have faith.’

The 71-year-old, who is a close friend of the President, also said he was ‘super confident’ about the special relationship between Britain and the US. 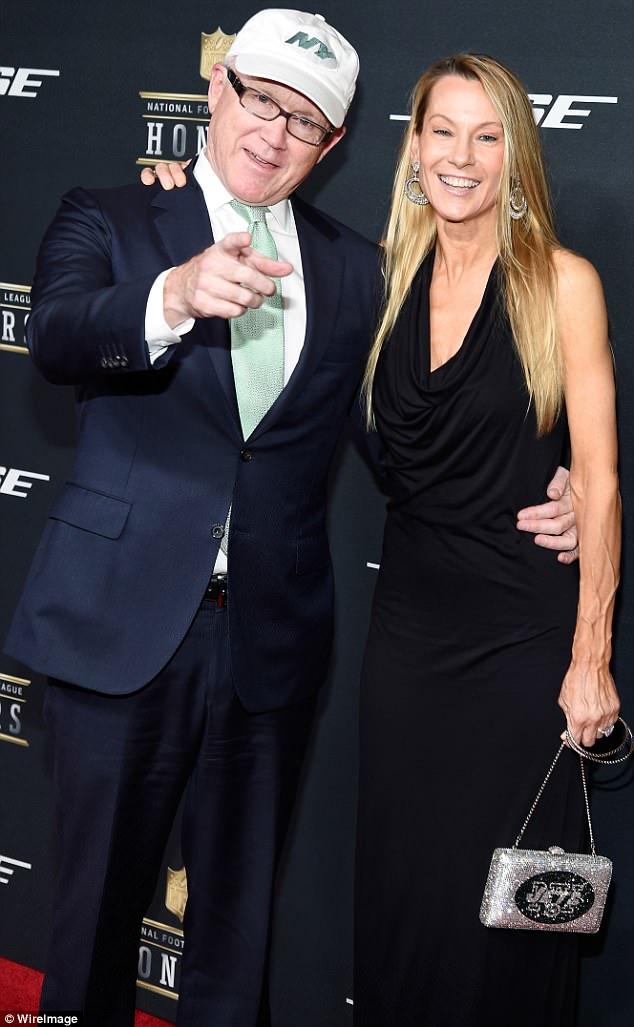 ‘The thing I want to get out more than anything else is an attitude that I feel I don’t see enough in this country and that is a confidence for where you are heading – light at the end of the tunnel with Brexit,’ he said.

‘The British have always been experts and great business people, great business minds, so to see this defeatist attitude towards Brexit is a bit startling to me.

‘I read nothing about anybody having a positive attitude towards Brexit or towards the future. As an American I’m just not used to that.’

Mr Johnson, who was speaking in a Channel 4 programme documenting his first nine months in London, questioned why people are ‘so nervous’ about Brexit.

‘I don’t think that is a major challenge, why are we so nervous? We don’t have the confidence in ourselves? We got the best people right here to do it. That is my take on my first months here.’

The Johnson & Johnson heir and owner of the New York Jets American football team, who is worth an estimated £3.2billion, suggested that Britain could replicate Mr Trump’s tax cuts. 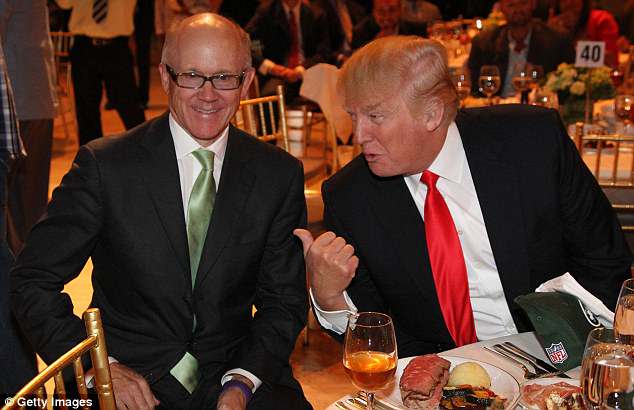 71-year-old Johnson (pictured with Trump), who is a close friend of the President, also said he was ‘super confident’ about the special relationship between Britain and the US

Last December, the President secured approval from the US Senate for a £1trillon tax cut for corporations, small businesses and individuals, which included reducing the rate on business profits from 35 per cent to 21 per cent.

Mr Johnson said: ‘When you look at Donald Trump and what he has done, maybe take some inspiration and do some of the things he has done.

‘I mean he turned something round in one year, he has got 3 per cent growth.’

The ambassador told him: ‘I had a very interesting group for breakfast yesterday, basically the whole financial community. They say the world does not really care about Brexit.

‘The only people who care about Brexit are really mostly here, a little a bit in the EU. The Chinese really don’t care about it, the American population does not know what it is.

‘If you take a look from that perspective, I think it puts, maybe, our discussions now in some kind of new perspective or different perspective. 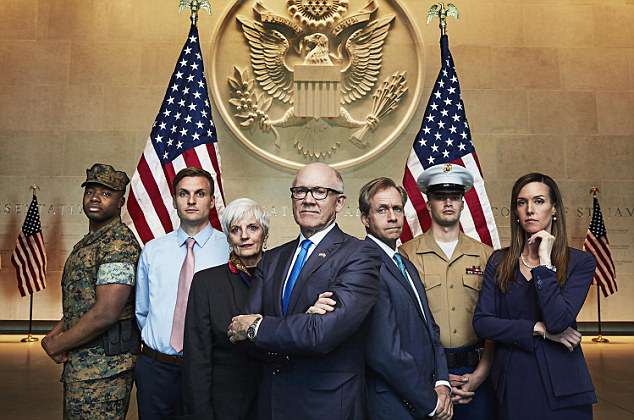 Inside the American Embassy: Trump’s Man in Britain (ambassador Robert ‘Woody’ Johnson pictured centre with his aides) will air on Channel 4 at 10pm on Monday, June 25

Earlier this month, Boris Johnson suggested at a private dinner that Mr Trump would handle the Brexit negotiations better than the Prime Minister.

In a leaked recording of the gathering of Tory supporters, the Foreign Secretary said he was ‘increasingly admiring’ of the President and was ‘more and more convinced that there is method in his madness’.

The US ambassador’s intervention came as two senior ministers spoke of the need to be more upbeat about Brexit.

Housing minister Dominic Raab told the House magazine: ‘I think we should go into these negotiations with a bit of economic self-confidence.

‘The economy has held up and proved far more resilient than some of the naysayers suggested. We should go into it with political ambition.’

And, in a speech yesterday, International Development Secretary Penny Mordaunt said it was time to ‘cheer up’. She said: ‘As we leave the EU we need to get our mojo back.’

Inside the American Embassy: Trump’s Man in Britain will air on Channel 4 at 10pm on Monday.