Britain’s TROPICAL Autumn! UK is set for 27C sizzler today with temperatures hotter than Bondi Beach – as glorious Indian Summer will last until next weekend

After around 26C today, the Met Office forecasts a showery 21C Monday before widespread sunshine from Tuesday as highs climb back to 25C from Thursday for the weekend.

Average September highs are just 18C. The Met Office forecast tropical heat arriving – as shown on a weather map below. 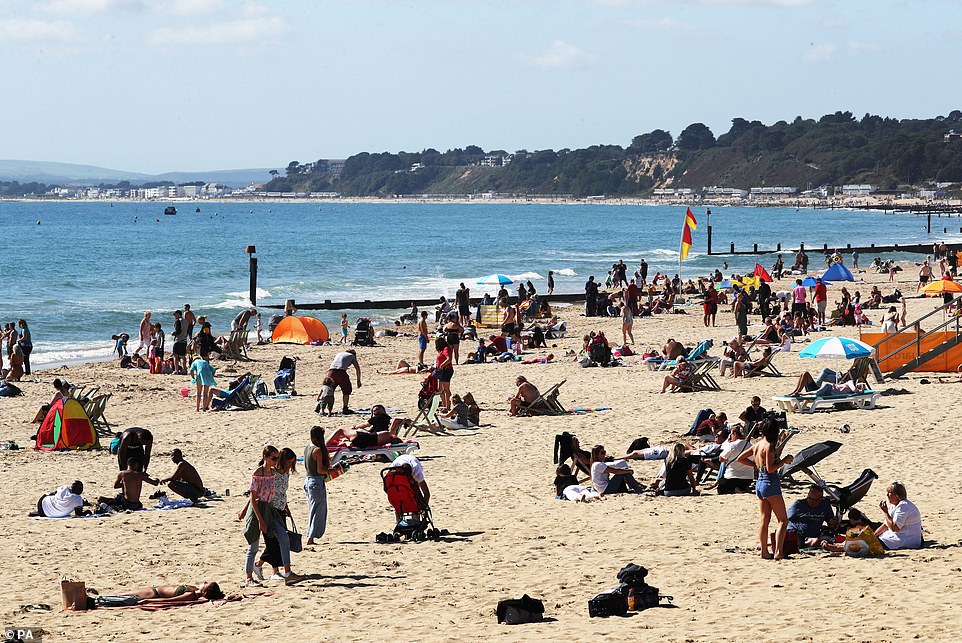 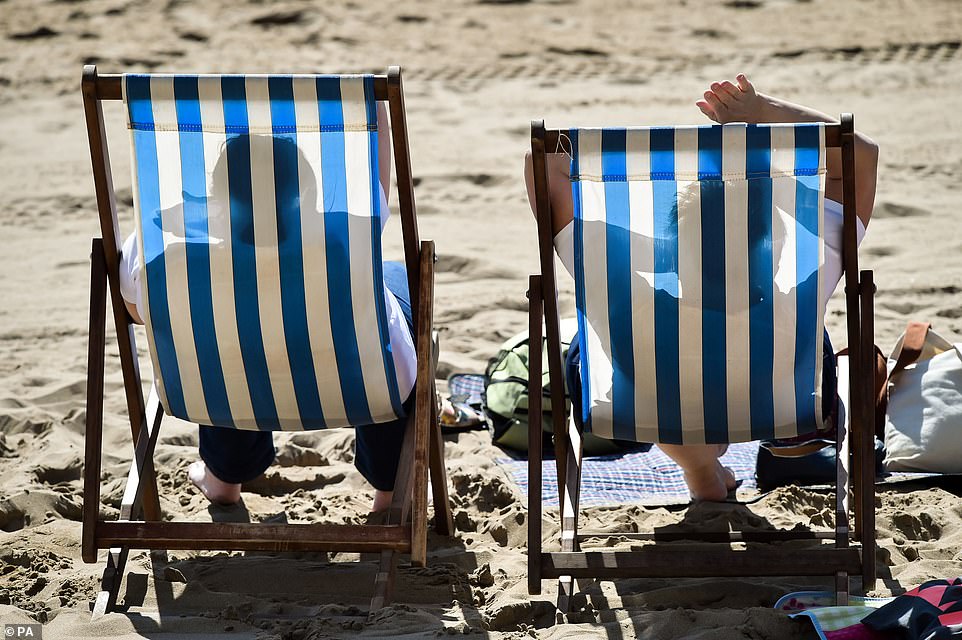 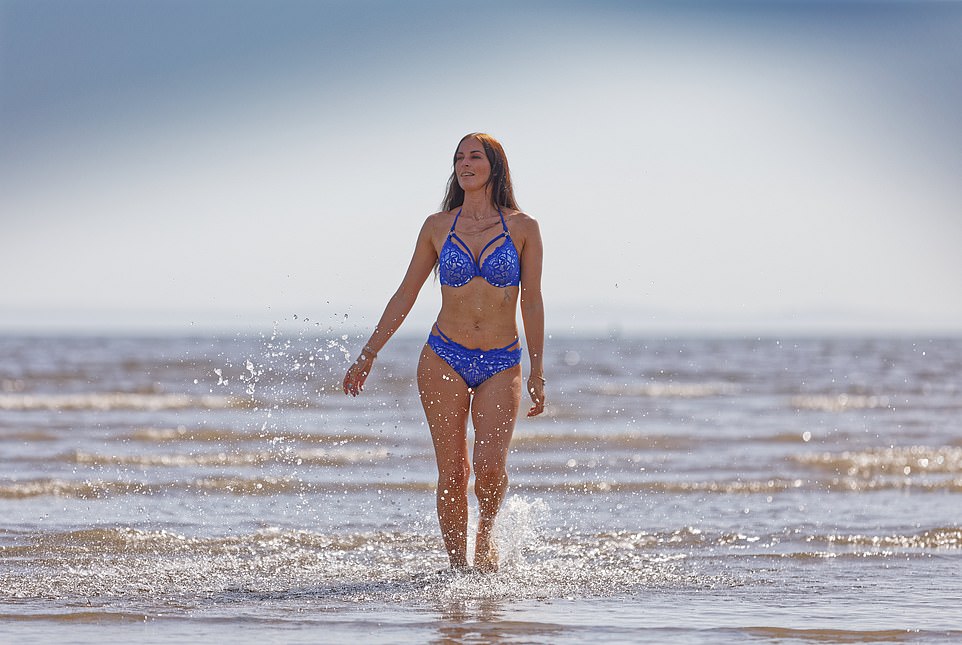 Natasha Jenkins enjoys the sunshine by the beach, in Swansea Bay, Wales, yesterday 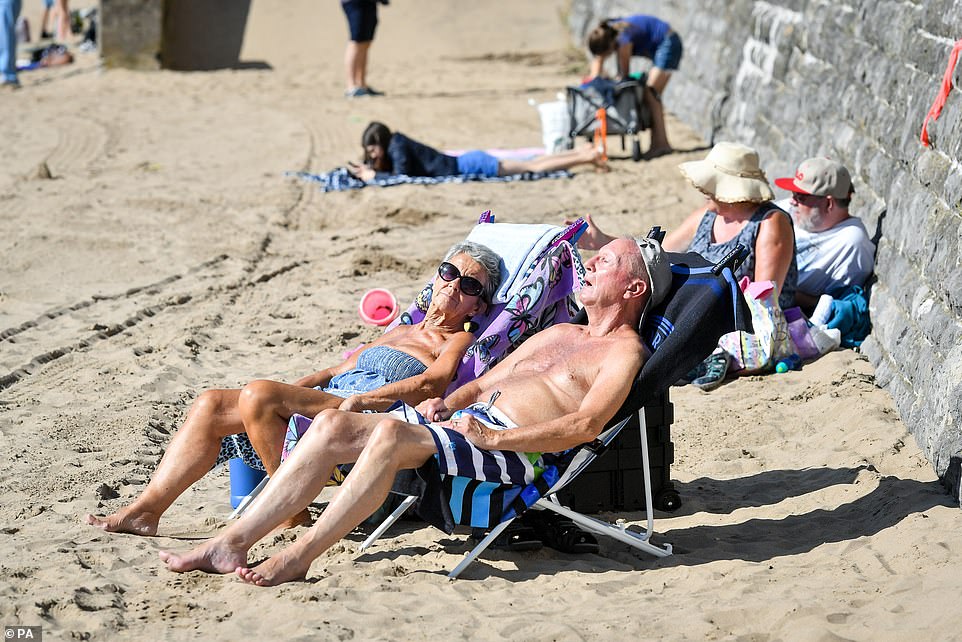 It’s a heatwave! Two sunbathers doze on the beach as they make the most of the sun with a flask of tea by their side in Barry Island, Vale of Glamorgan, Wales 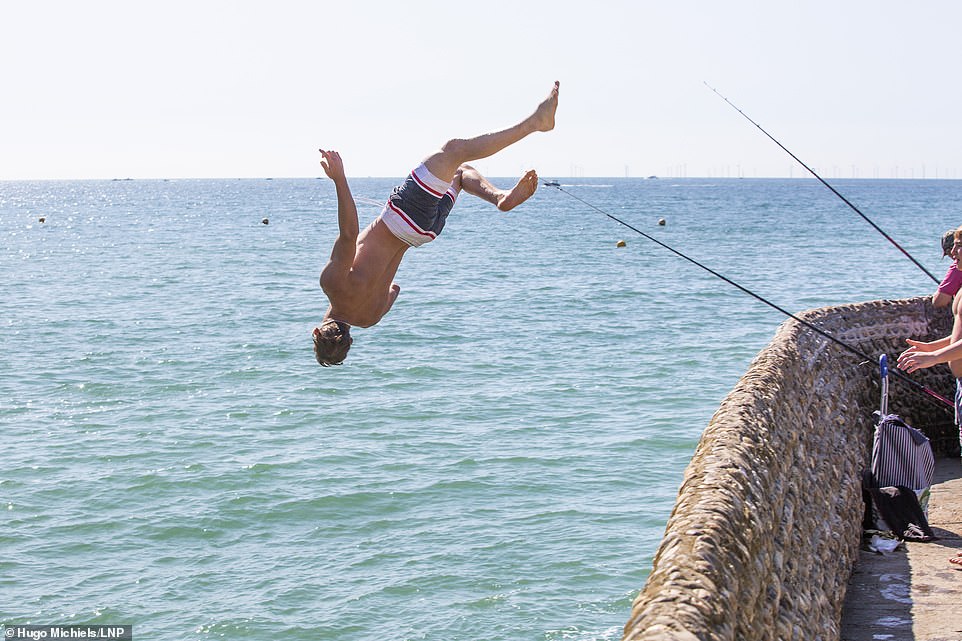 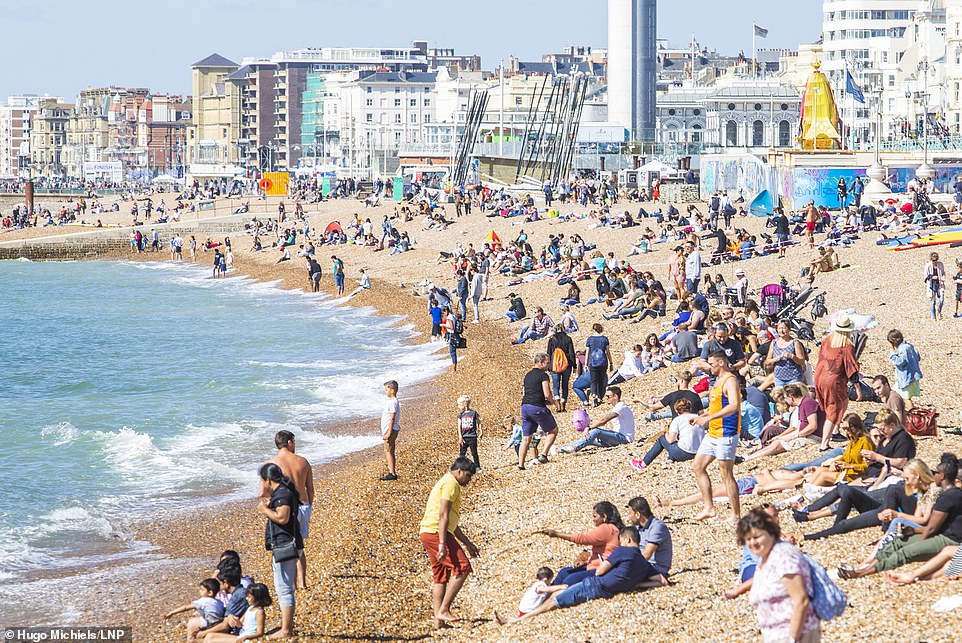 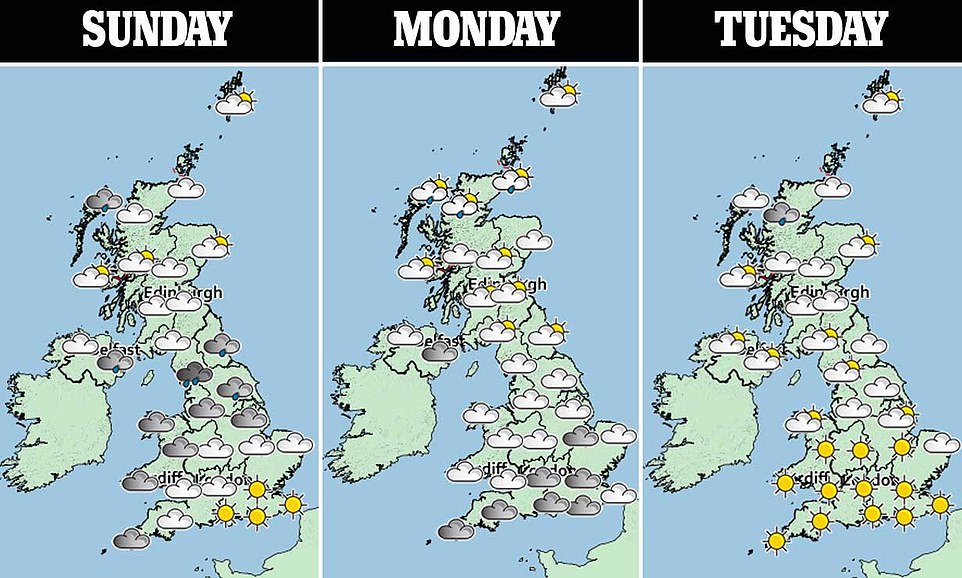 Temperatures remain approximately one or two degrees warmer across the UK on Sunday, while typical Autumn weather will resume later in the week

Britain will be hotter than 21C Bondi, Sydney, in springtime Australia, and 23C Madrid and 22C Santander, Spain.

The Met Office forecast mainly settled conditions with ‘warm sunshine’ for up to two weeks, until the end of September.

20,000 beach visitors were expected in Brighton yesterday (Sun) as daytrippers saw heavier traffic on coastal routes including the A23 to Brighton and A31 to Dorset. 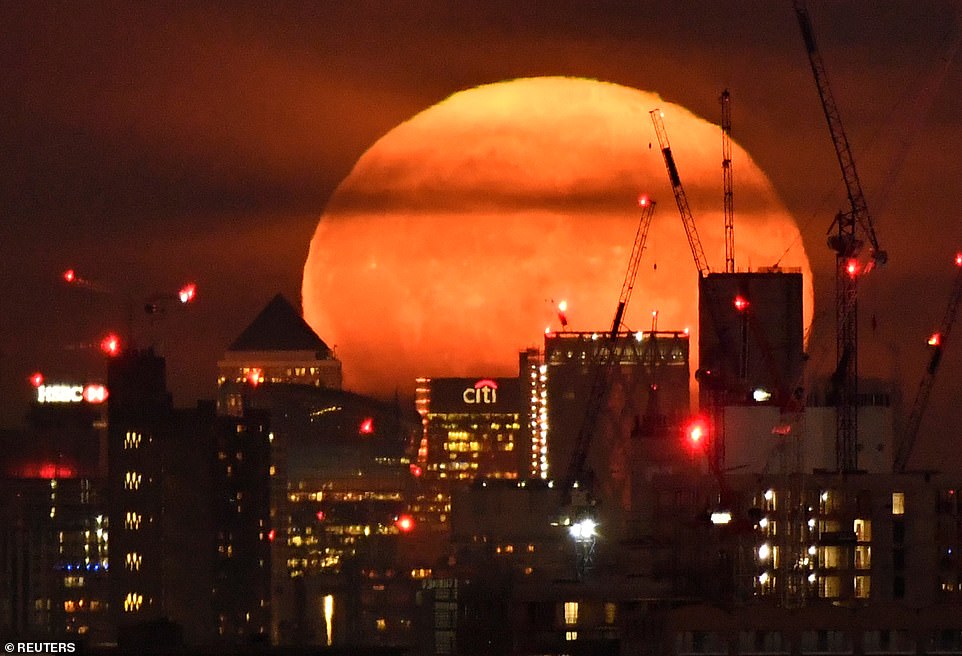 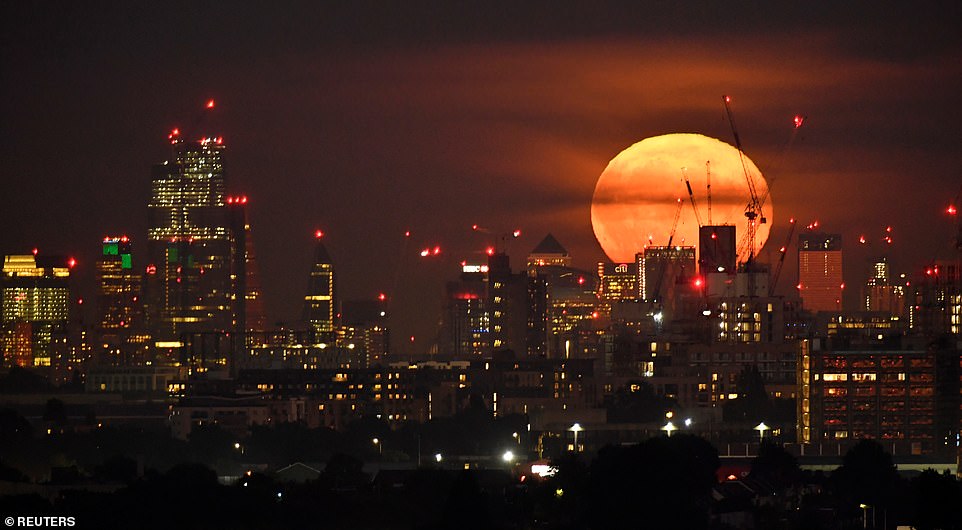 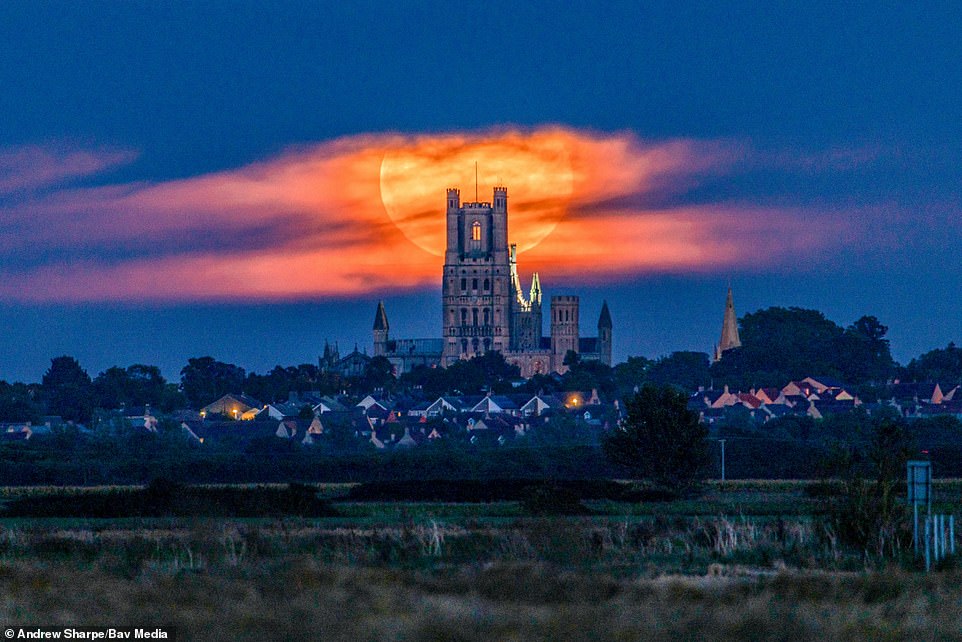 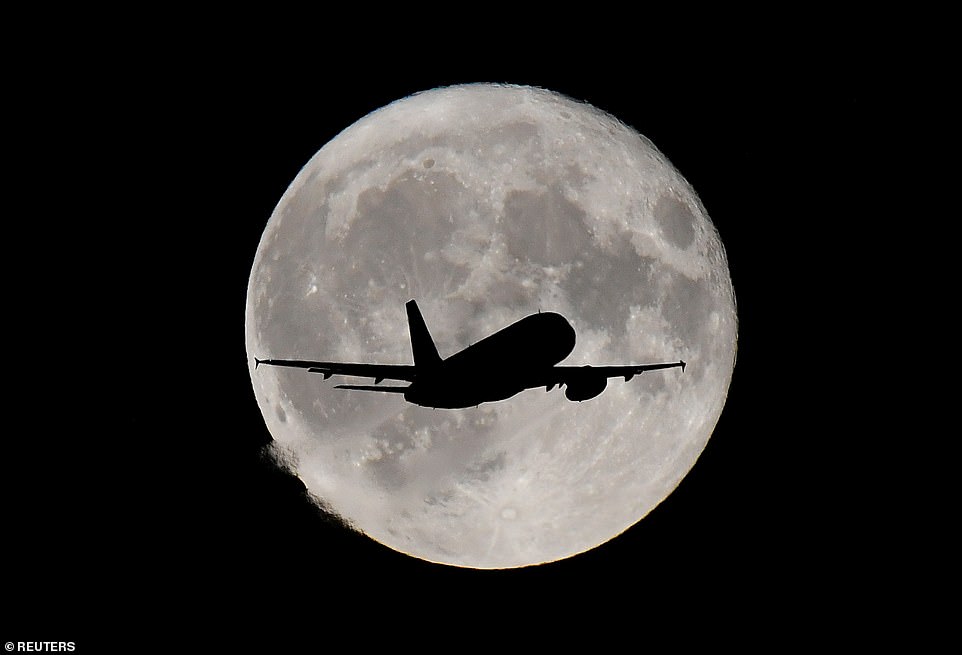 The Harvest Moon is the name given to the first full moon which takes place closest to the Autumn equinox. A passenger plane passes in front of the full moon as it approaches heathrow

Met Office forecaster Helen Roberts said: ‘After 25C on Sunday, a fresher Monday follows – before highs climb through the week, with the mid-20s, maybe 25C, at end of the week.

‘There will be sunny spells widely from Tuesday, with high pressure and a lot of tropical air being drawn up.

‘It’s a definite change after an unsettled early September. ‘And the week from September 23 also looks like remaining fairly settled with high pressure, although the North-West may see some more unsettled weather at times.’

Met Office forecaster Sarah Kent said: ‘Spells of warm sunshine are likely to continue. It is likely settled conditions will prevail until the end of September.’

The Weather Outlook forecaster Brian Gaze said: ’26C is possible later in the coming week as a thrust of subtropical air brings Indian Summer-style conditions, with plenty of warm sunshine and beach weather for parts.’

Ex-BBC and Met Office forecaster John Hammond of weathertrending said: ‘Subtropical southerlies bring the prospect of fine, warm weather. ‘The mid-20s may be seen, more typical of midsummer, before a downward trend in temperatures towards September 29.’