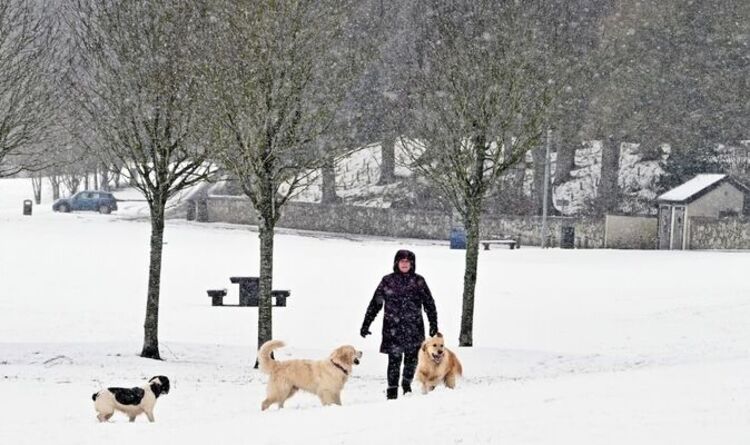 The bitter cold weather front has been labelled a “troublemaker” by meteorologists as Brits will be forced to turn their heaters back on. Snow will start to fall in the northern parts of Scotland from the early hours of Tuesday morning with one to three centimetres expected in areas such as Inverness and Aberdeen.

During these hours the rest of the UK will receive increased cloud cover and showers but with temperatures dropping from double digits into single digits for most.

BBC weather presenter Ben Rich stated on Countryfile that the majority of the UK can expect “mild night temperatures between four and 10 degrees” while parts of Scotland will suffer sub-zero temperatures.

Mr Rich noted that the increasing cold weather front is set to become “a big player in our weather” this week as it brings wintry showers and cold chill from the north.

From Wednesday, there will be “much colder air tucking in from the north” and northern areas such as Middlesbrough and Newcastle are predicted to see up to nine centimetres of snowfall, according to WXCharts.

The BBC’s forecaster stated that by Thursday the cold weather front that will bring the wintry conditions to the north “could become something of a troublemaker.”

By the early hours of Thursday morning, some areas in the UK will be hit with bitter temperatures as low as minus seven degrees Celsius.

Manchester is expected to have up to seven centimetres of snow according to snow depth charts while Birmingham will see between one and three centimetres.

Mr Rich added: “Chances are that we will generate an area of low pressure along that front” which will cause a “zone of sleet and snow” across the southern parts of the UK.

The southern parts of the UK will experience temperatures between 0 and three degrees Celsius.

DON’T MISS:
POLL: Do YOU think pensioners have been let down by Tory Party? (POLL)
Flurona: Patients with Covid and flu at higher risk of death (REVEAL)
Kate Middleton is ‘confident’ on tour while William is ‘more cautious’ (INSIGHT)

This is a 10C drop compared to the 13C from Sunday and the soaring 20C temperatures seen earlier in the week that saw people sunbathing in parks across the country.

Widespread frost is expected on Thursday night with most areas below freezing before the cold snap eases off and temperatures stabilise in single digits.