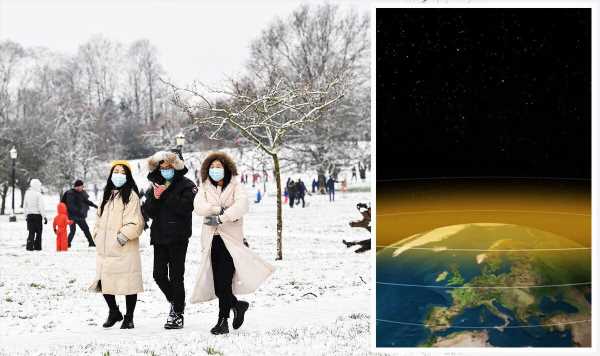 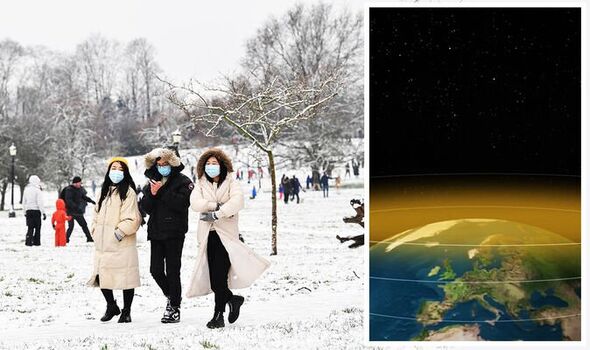 Weather experts have urged to ‘prepare for the worst’ as meteorological cold weather drivers join forces for a cocktail of winter misery. A La Nina cooling of the eastern Pacific, an Arctic Sudden Stratospheric Warming (SSW), which drove the 2018 Beast from the East, and stubborn high pressure, threaten to drive in cold weather as early as November.

Temperatures threaten to plunge through the start of next month as winter storms begin to whip up, according to some forecasts.

Exacta Weather’s James Madden said: “La Nina can bolster the opportunity for colder shots of weather during the latter part of Autumn, and current indications suggest that a cool November is on the cards.

“We expect stormy conditions throughout November which could coincide with colder incursions to deliver some early wintry blasts.

“There is now a very high chance that La Nina will continue through autumn and into winter 2022/23.”

Scotland and northern England will be first in the firing line for the cold, which could arrive as early as this month, he added.

Depending on how high pressure builds through the coming weeks, Britain could be in the path of a torrent of northerly winds.

An SSW event, which happens when cold air in the Arctic stratosphere sinks causing temperatures to rise, can jolt the jet stream opening the gates to freezing easterly winds.

Such a scenario was the driving force for prolonged extreme cold and snow during late winter, early spring 2018.

Met Office chief meteorologist Paul Davies said: “Exact weather conditions will be dictated by where the high pressure settles over the Atlantic and the UK.

“But we are likely to see a higher incidence of northerly airflows, preventing mild, moist air flowing to the UK from the Atlantic Ocean and increasing the potential for cold snaps with some threat of snow and ice, mainly in northern areas.

“The most likely scenario as we head into 2023 is for the risk of high-pressure to decrease, and a return to more unsettled conditions with wet, windy, and mild spells possible.

“However, there is still a risk we could see a Sudden Stratospheric Warming.

“If this happens it could potentially lead to a cold spell for the UK and northern Europe.”

However, the chances for a very cold winter comparable to the chiller of 2009/10, he said, are low.

Independent forecasters agree the outlook is still uncertain, although they warn to prepare for the worst.

Jim Dale, meteorologist for British Weather Services and author of Weather Or Not? said: “We have a strong La Nina and that was the driver for the very cold winter of 2009/10.

“However, while there is no certainty that this will be the case this year, it is important people prepare for the worst as it is very possible that we could be heading into a cold period.

“In the event of a severe winter is crucial to prepare especially this year with the energy and cost-of-living crisis.

“It is case of preparing for a possible worst case scenario but hoping it won’t happen.”

Icy predictions have prompted bookies to start slashing the odds on festive snow with Coral offering 4-5 from 2-1 on a White Christmas.

Spokesman John Hill said: “We are less than 100 days away from Christmas now, and with temperatures set to fall rapidly over the upcoming days, the early odds suggest we could be set for a White Christmas this year.

“Not only have we cut the odds on October ending as the coldest on record, but we are not ruling out snowfall.”