The wintry conditions are set to move in from Sunday December 27, according to the latest weather charts. The maps show snow is expected to blanket much of the UK overnight and continue into early next week. The weather charts show even the south east of England is set to see flurries of snow.

Snow risk charts from Netweather show the wintry conditions are set to start in Scotland from 6am on Sunday December 27.

The map shows there is a 100 percent risk of snow over much of Scotland at this time.

By the evening the snowy conditions move further south, as much of the UK is seen to turn green, yellow and red indicating a high snow risk by 6pm.

The red and white colours indicate between a 75-100 percent chance of snowfall, while the yellows and greens offer between 30-70 percent snow risk.

Wales and North Scotland looks set to see the worst of the snow on Sunday evening, as both areas turn dark red. 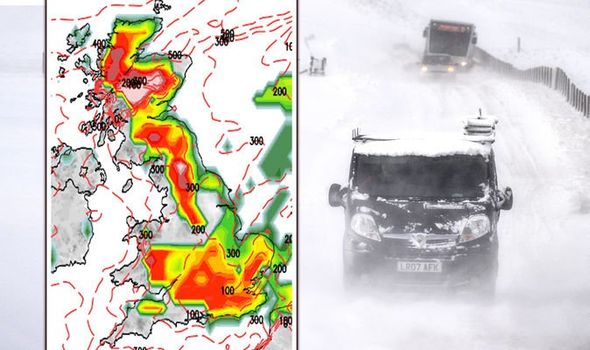 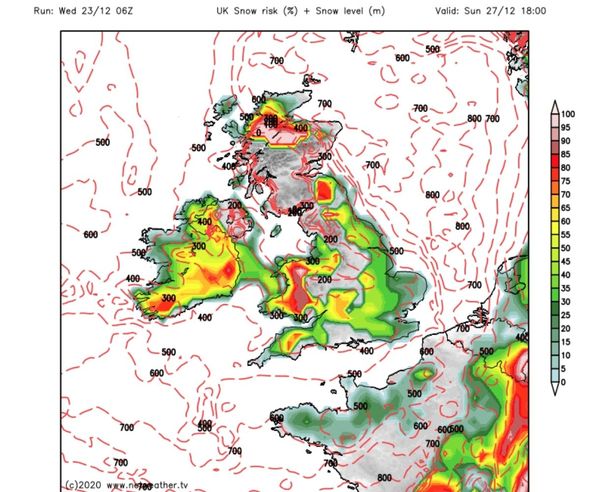 By midnight on Monday more parts of the UK turns dark red, as the snow risk increases.

As 12pm hits, large parts of Scotland, Wales and the Midlands have at least an 85 percent risk of snow.

A second map by WXCharts shows parts of Wales and the north of England can expect up to 1.5inches (4cm) during the same period.

By 6pm on Monday the forecasters’ snow depth chart shows up to 6.2 inches (16cm) is forecast in parts of central Scotland. 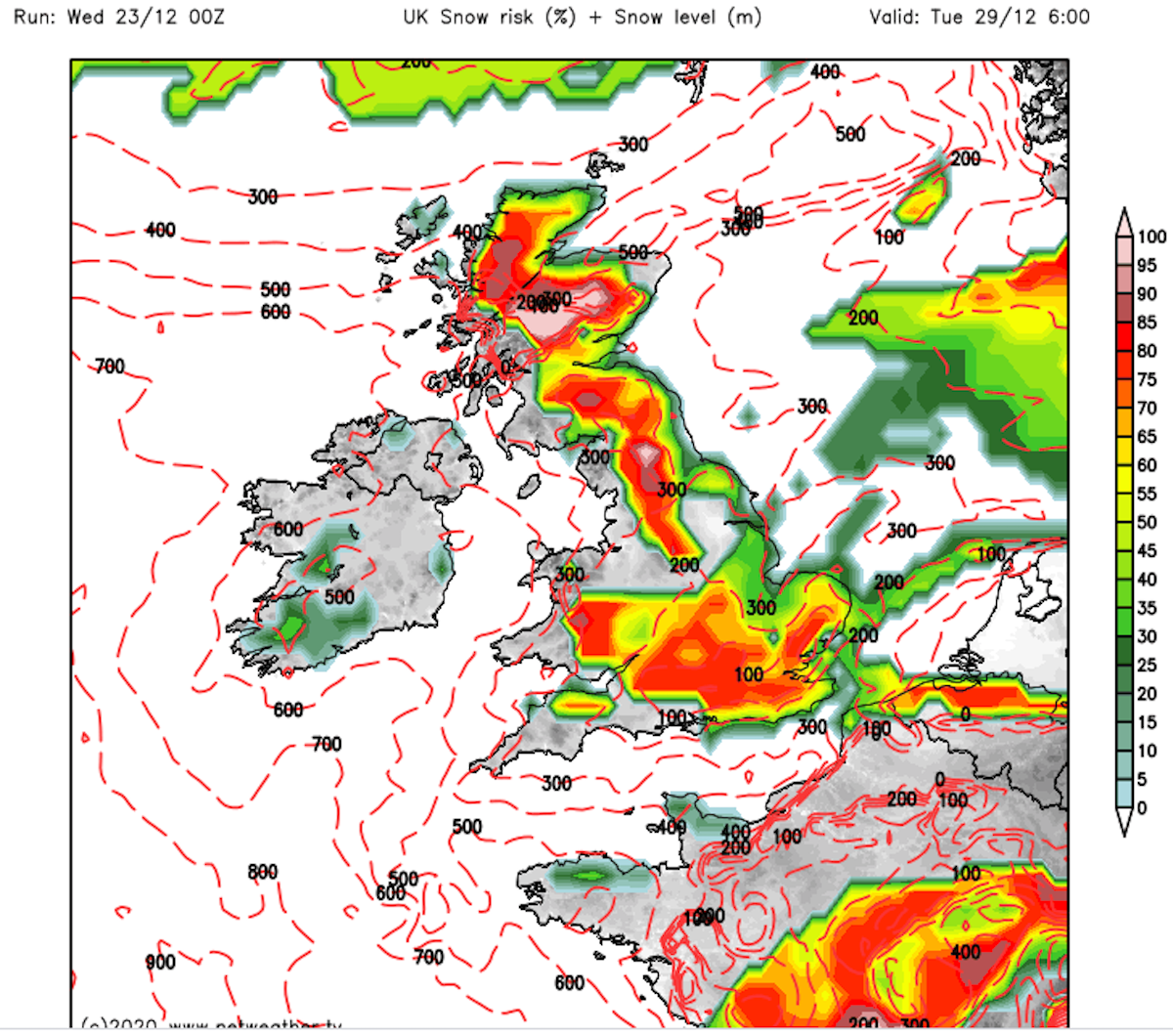 From 6am on Tuesday morning, much of Britain -including the capital – are expected to see snowfall.

Netweather’s snow risk map shows much of the UK turn bright red to indicate the high chance of snow.

The charts indicate the wintry conditions looks set to move in from the east from the early hours of Tuesday morning.

BBC forecasters concur with the weather maps and state: “By Sunday, the colder air will return from the north-west, with showers falling increasingly as hail, sleet and even some snow over the hills. 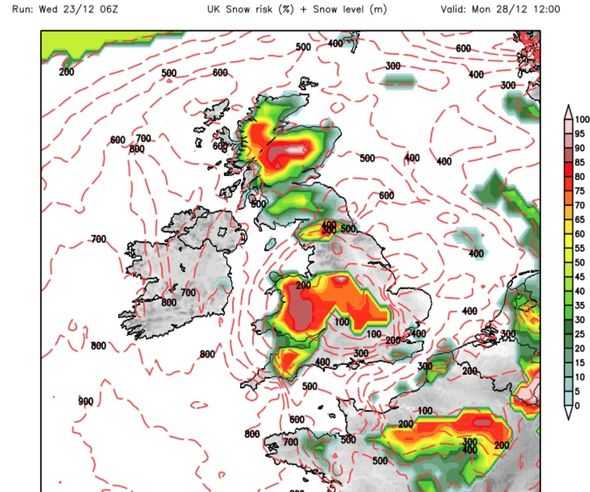 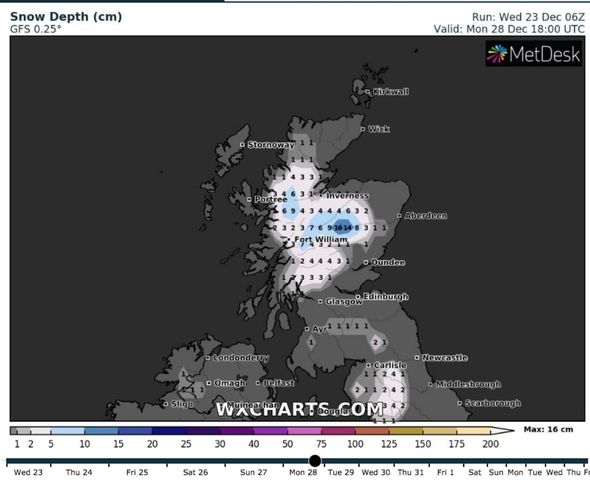 “Further wintry showers on Sunday night, with a frost and a high risk of ice on untreated surfaces.

“Snow may fall and settle in some northern and western areas on Sunday night.”

The Met Office also believes the period between Christmas and New Year could be characterised by snow.

They said: “It is expected to stay unsettled for the rest of the weekend and in the run-up to New Year.

“Outbreaks of rain, heavy showers and strong winds are likely, and there is an increased chance of snow down to lower levels in places. 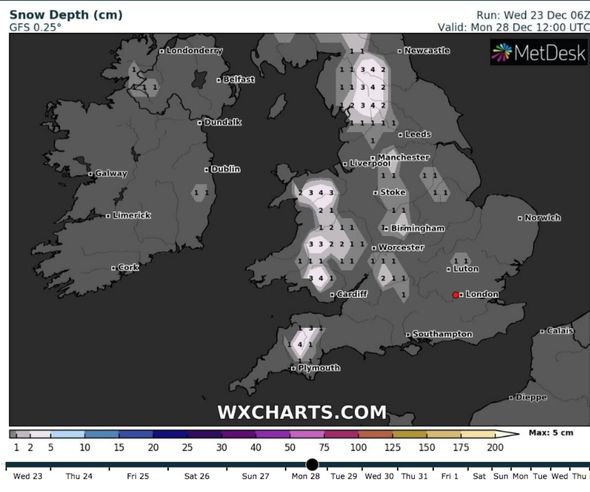 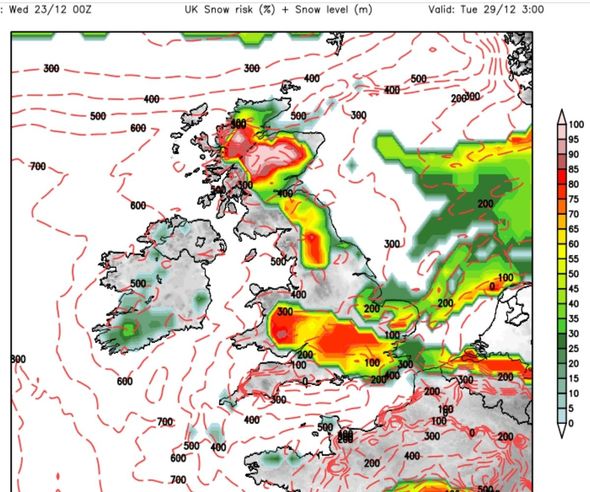 Despite there being a high chance of snowfall across much of Britain next week, Christmas day is expected to stay dry.

The Met Office said: “An area of high pressure is expected to the west of the UK on Christmas Day bringing cold and generally dry conditions for most.

“After a cold, frosty start it will stay mainly dry with sunny periods.”

BBC forecasters agree and said: “Christmas Day will be cold, but largely dry and fine over England and Wales.”

But they do state East Anglia and Lincolnshire could “catch a wintry shower”.