BBC Weather: UK to be hit by 50mph gusts as temperatures drop

Britain has already seen temperatures plummet this week and snow blanket parts of the country as a cold front moved in, and the latest weather charts show similar conditions forecast next week. The mercury is set to plunge to -5C from Tuesday, with snow expected to hit Scotland and spread further south as the week progresses, weather charts suggest.

Latest maps show the week will be off to a cold start for much of Britain.

Netweather maps show the country turn any icy blue as temperatures plunge to -5C in the Scottish Highlands and the mercury dips just below freezing across most other parts of the UK by 9am on Monday December 7.

The chilly temperatures look set to continue overnight, with snow predicted to blanket Scotland and parts of north east England.

Netweather’s snow risk chart shows there is up to an 85 percent chance of snow in these areas at 3am, which is indicated by the red areas on the map. 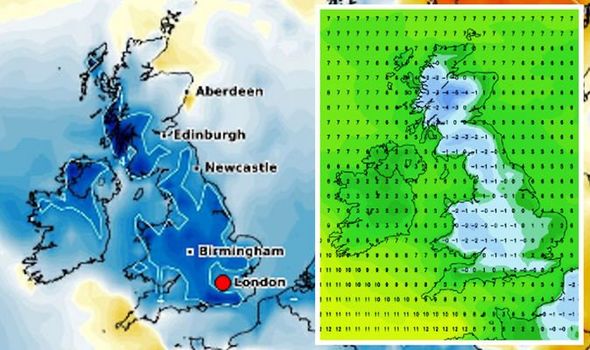 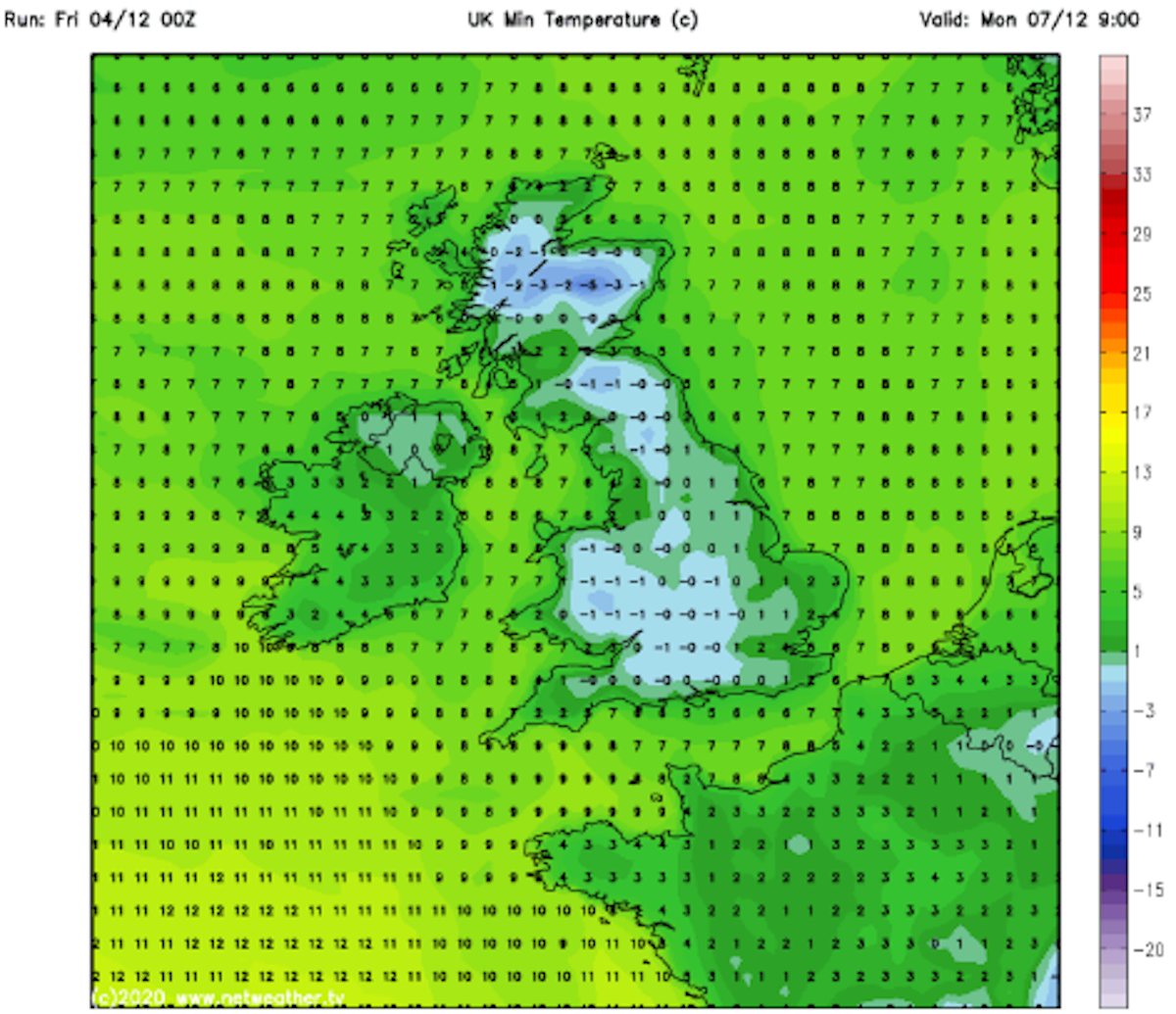 The wintry conditions are expected to continue through Wednesday, with WXCharts forecasting up to 5.5 inches (14cm) of snow in Scotland by 12pm.

By Friday snow is forecast across Wales, with the snow risk chart indicating there is a high chance of snowfall from 3am.

The snow risk continues throughout the day and also extends to parts of northern Scotland by the afternoon.

As the weekend moves in, temperatures are expected to remain chilly with -5C forecast in Scotland and lows of -2C expected in other parts of the UK. 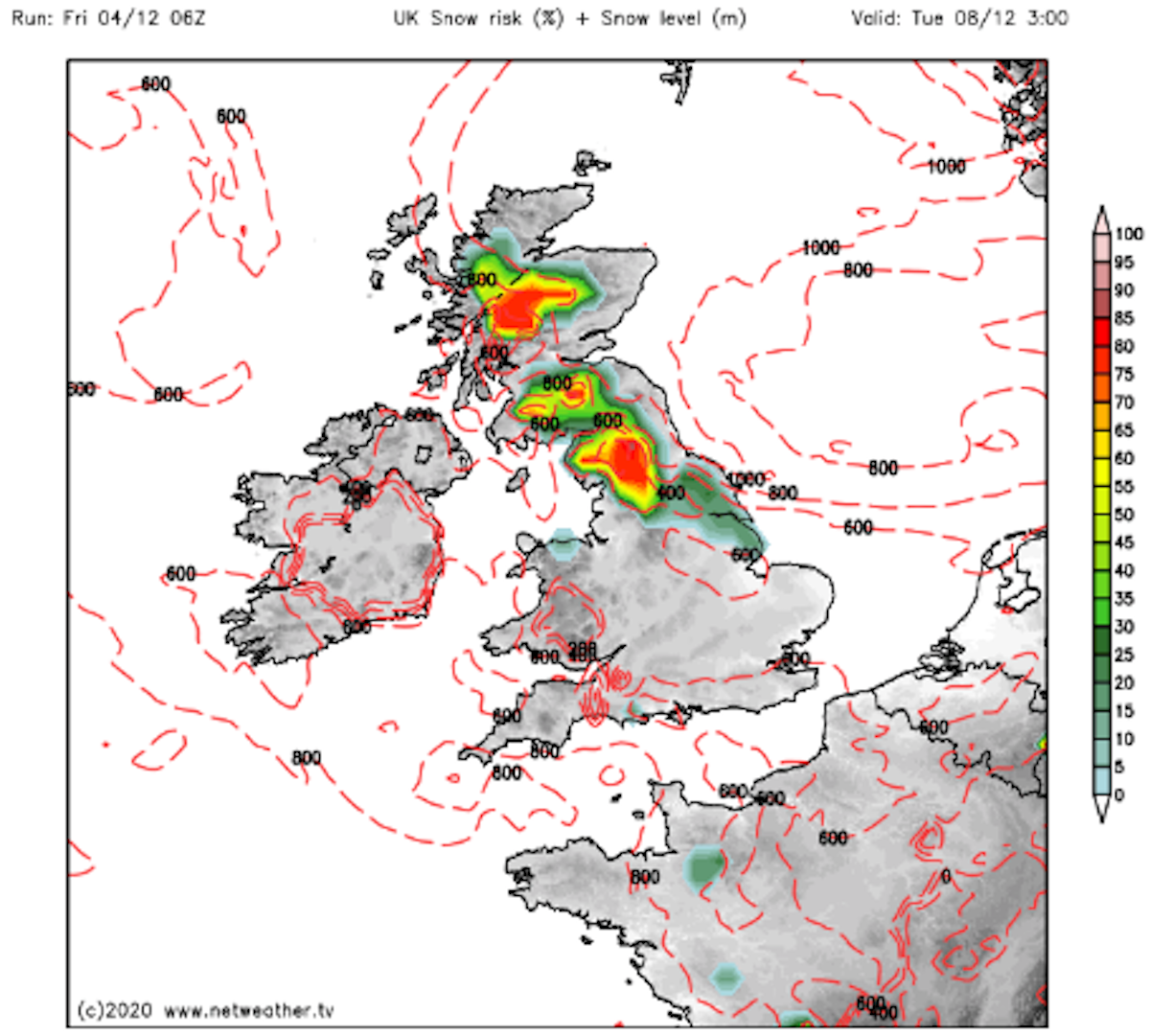 The cold spell is set to coincide with yet more snow in northern parts of the UK, as indicated by Netweather charts.

They said: “After a cold and bright start to December for many of us, the second half of this week will become wet and windy, as a large low pressure system arrives and then stalls over the UK.

“It will be cold enough for some snow, more likely over higher ground in the north and west but even southern regions could be at risk of some wet snow for a time. 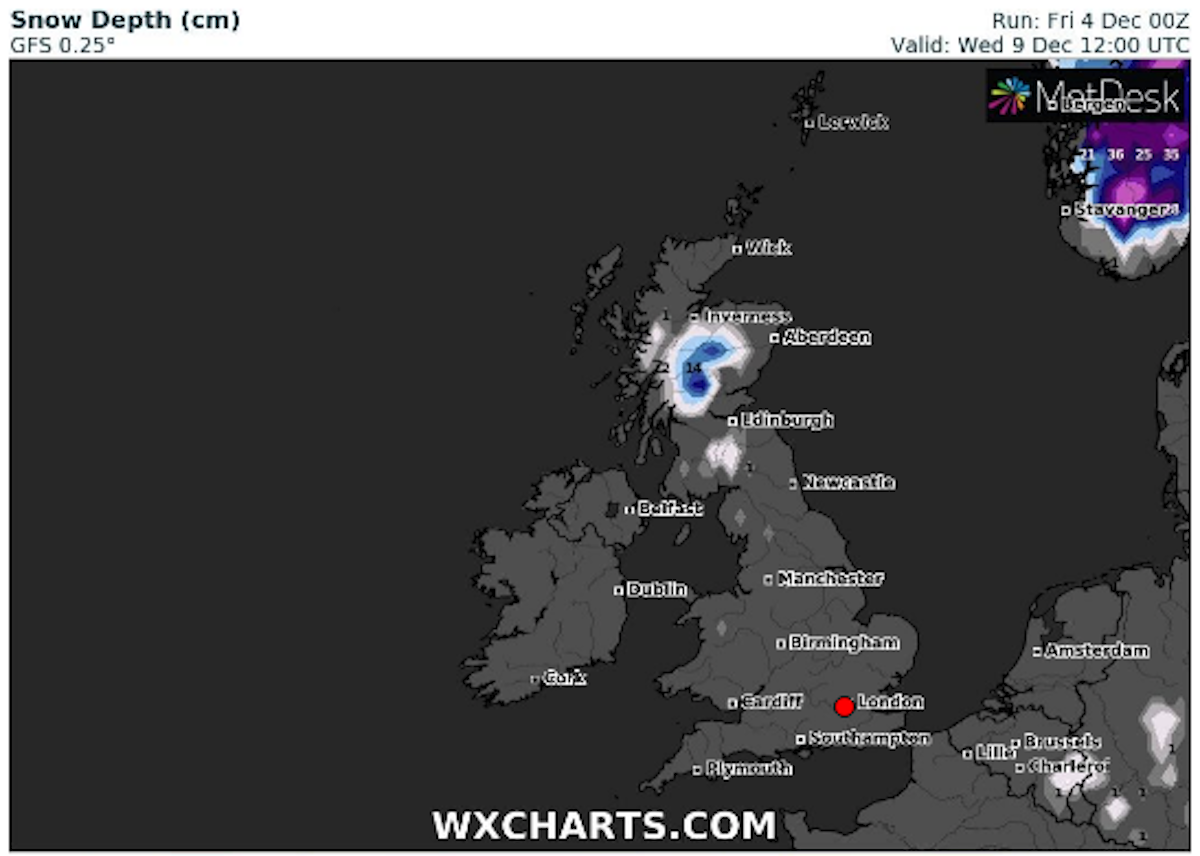 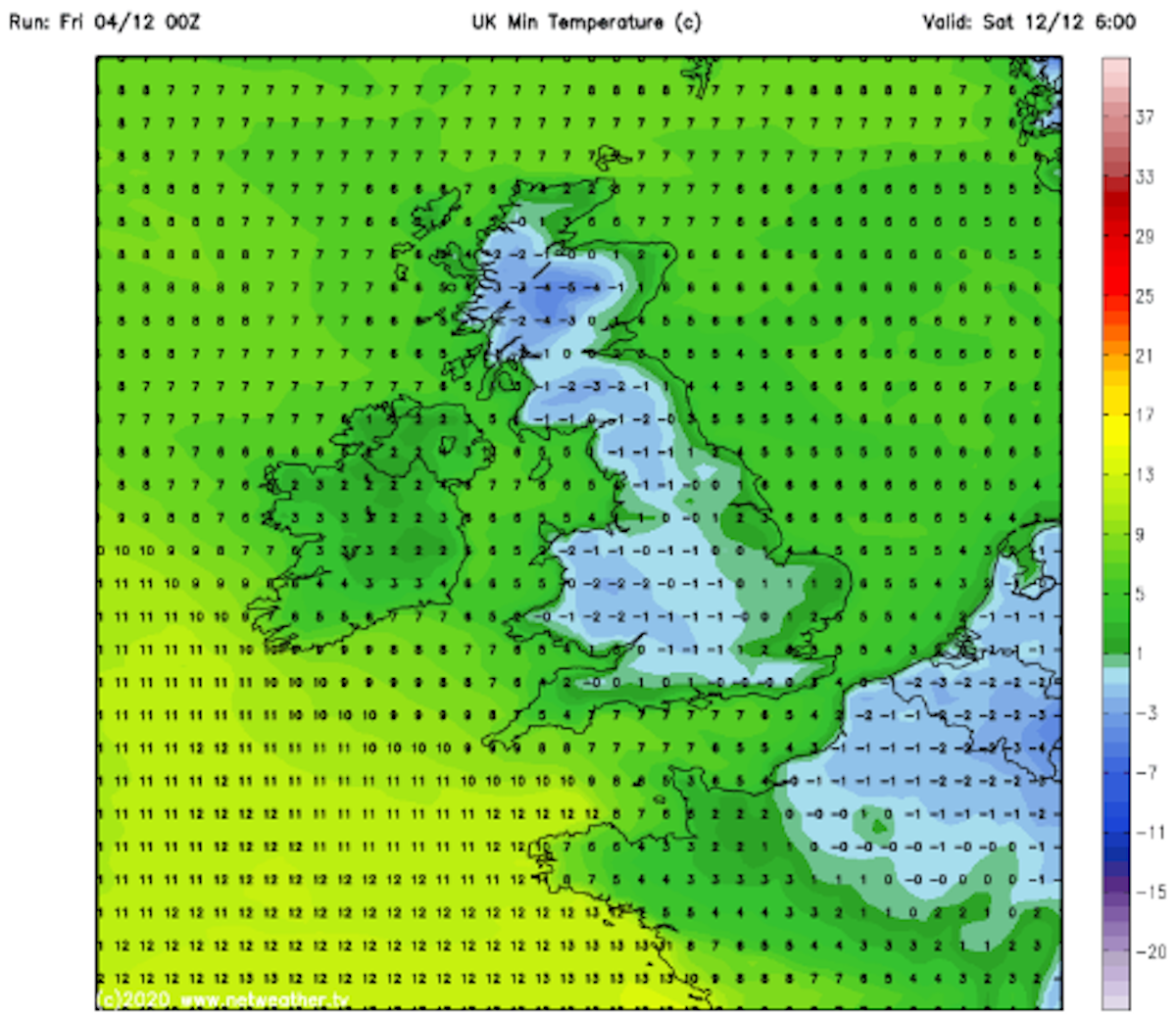 “The middle two weeks in December will be very changeable but often on the cold side, with the prospect of some sleet and snow especially over the higher ground.”

They state: “There will be a steadily increasing chance of more widespread unsettled weather, bringing cloud, rain, and possibly some hill snow at first, arriving from the Atlantic.

“The rain, accompanied by strong winds and coastal gales at times, will likely be heaviest in the west, whilst areas further east should remain drier longer.” 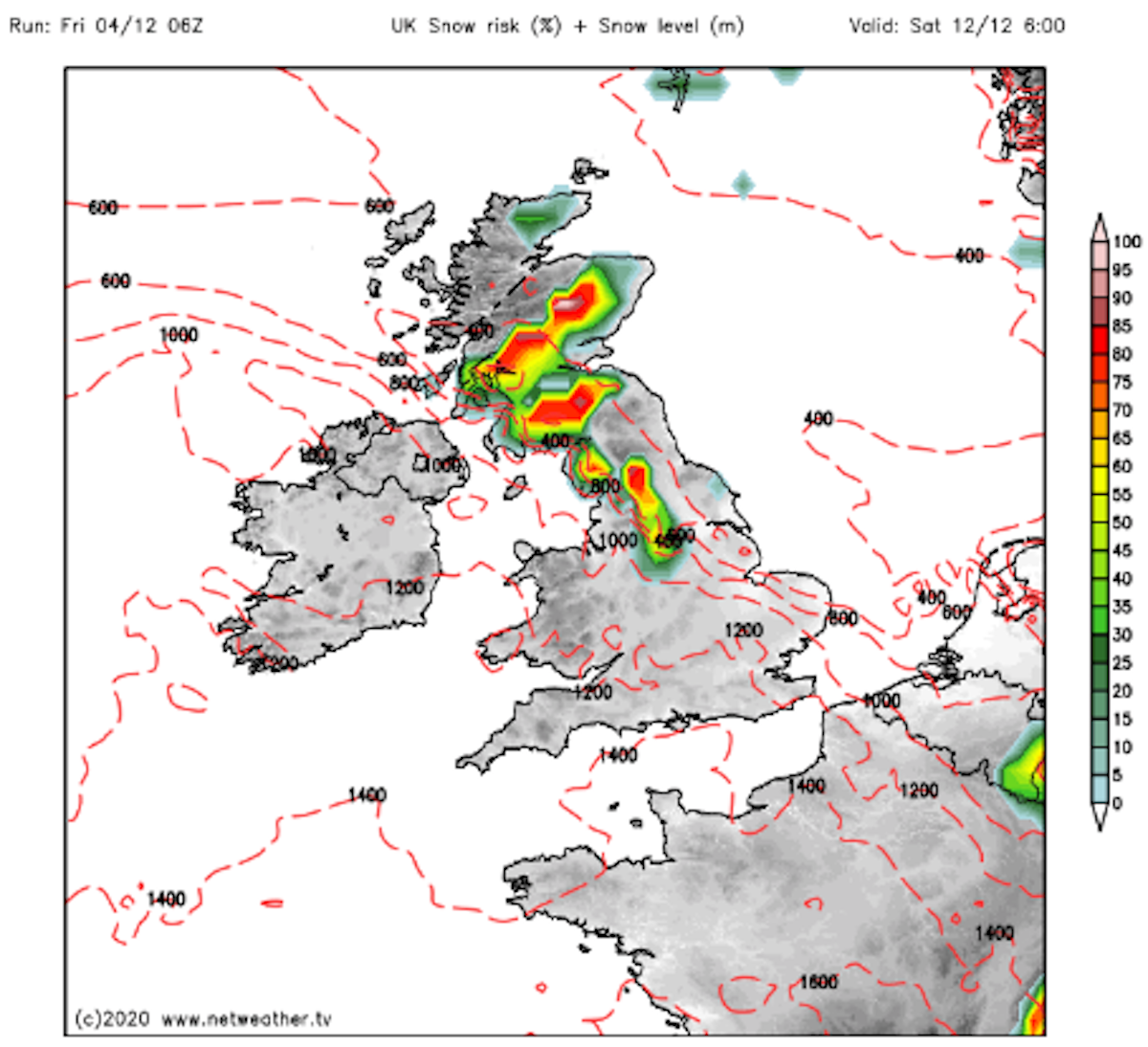 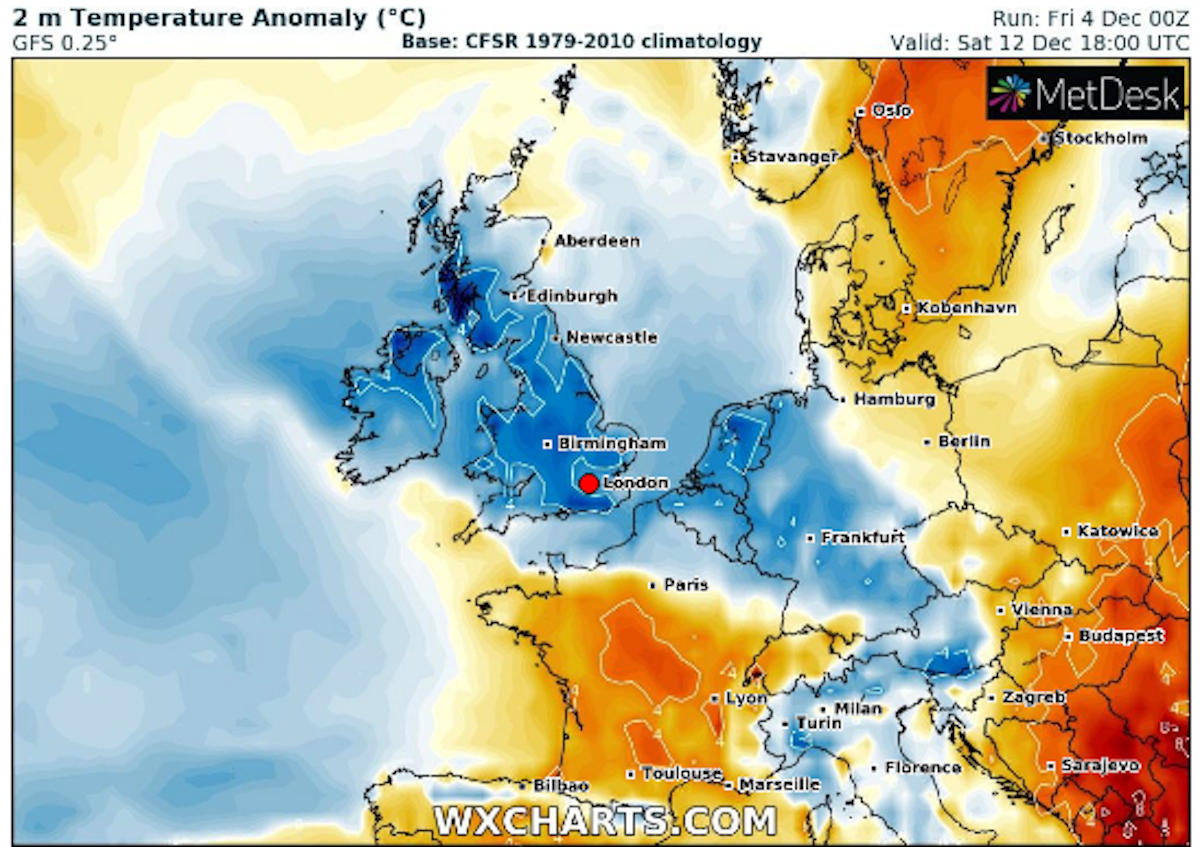 Bookmakers Ladbrokes expect this winter to be the coldest on record.

With temperatures continuing to tumble, the bookies have cut odds from 1/2 to just 1/3 on this being a record-breaking cold winter.

Elsewhere, odds have also been slashed to just 2/5 on snow falling anywhere in the UK on Christmas Day.

Alex Apati of Ladbrokes said: “Things are only going to get colder and while a White Christmas seems inevitable, it’s actually more likely that this winter goes down as a record-breaking cold one.”