February has seen the arrival of three named storms to Britain, along with the first snowfall of 2020 for some regions. According to the latest weather forecasts, more snow is likely to fall over the coming days as Storm Jorge blasts the UK.

Named by Spanish meteorological agency AEMET, Storm Jorge is forecast to batter the UK with winds up to 70mph this weekend.

But along with wind and rain, the Met Office is also forecasting heavy snowfall for some regions.

Frank Saunders, Chief Meteorologist at the Met Office, said: “From Saturday Storm Jorge will bring strong winds and heavy rain to parts of the UK, with potentially heavy snowfall being a hazard for parts of Scotland.” 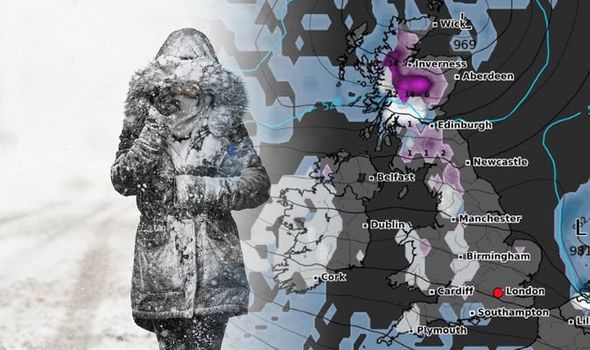 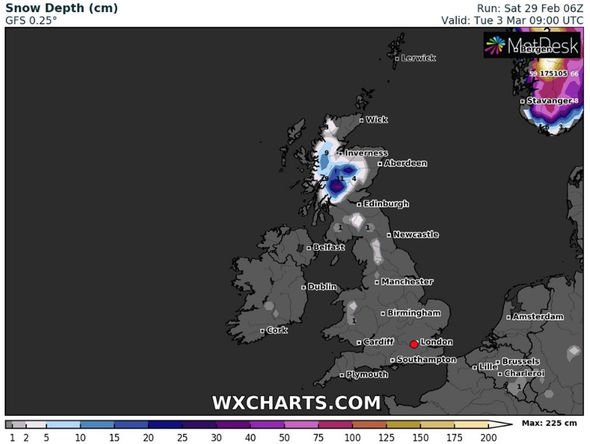 Mr Saunders added some regions could witness up to 12 inches (30cm) of cumulative snow this weekend.

“On Saturday and Sunday, the majority of the UK is covered by Yellow weather warnings with some areas being covered by more than one warning, indicating multiple weather hazards.”

Following Storm Jorge’s departure, the UK is forecast to “trend back to slightly colder conditions” towards the end of the weekend. 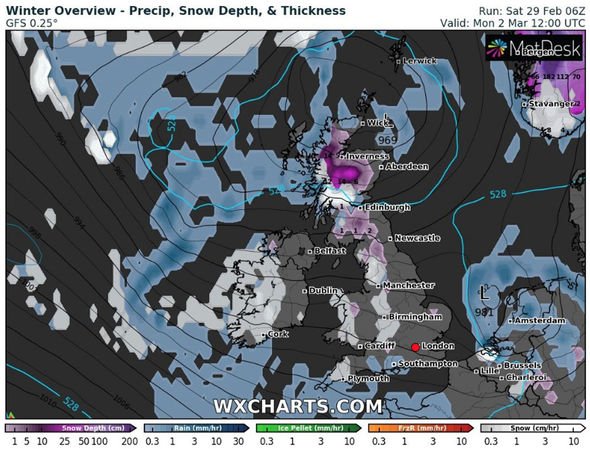 Dan Harris, Deputy Chief Meteorologist at the Met Office, said: “As Storm Jorge begins to weaken and slowly clear over the weekend we’ll see a trend back to slightly colder conditions, with some potentially disruptive snow over hills and mountains of Scotland and less severe wintry conditions over other hills in the north of the UK.”

Into next week, WXCHARTS snow depth maps show most snow will accumulate in Scotland.

However the maps indicate some snow depth in northern England and parts of Wales.

Winter overview maps also show some fresh snowfall over these regions on Monday.

Where are the Met Office snow warnings?

While Met Office weather warnings for wind cover much of the UK this weekend, only Scotland is currently under warning for snow.

A swathe of southern Scotland is under a yellow snow warning, as is much of northern, eastern and western Scotland.

The warning is in place between 3pm on Saturday until 12pm on Monday.

The Met Office are warning of potential “blizzard conditions” in some regions under warning. 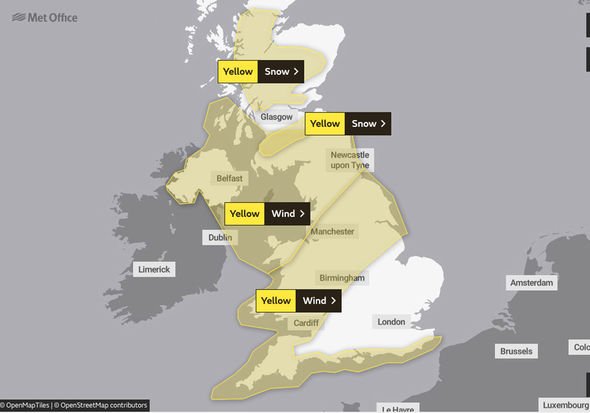 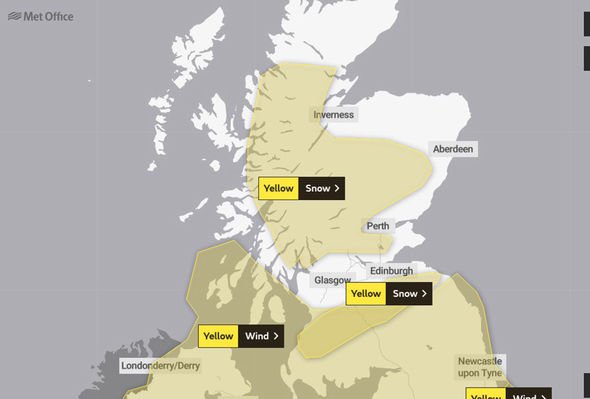 The warning reads: “Rain and hill snow is expected to arrive from the south-west later on Saturday, the area gradually drifting northwards through Saturday night, Sunday and into Monday.

“In some places this will be accompanied by gales, which will generate blizzard conditions.

“The largest accumulations will be confined to above 400 metres, where 20-30 cm of snow could build up, but more temporary accumulations of 2-5, locally 10 cm are possible down to around 250 metres.

“Some uncertainty remains over precisely where the focus of the heaviest snow will be, and uncertainty also increases in the details of various areas of snow later into the weekend and early next week.”