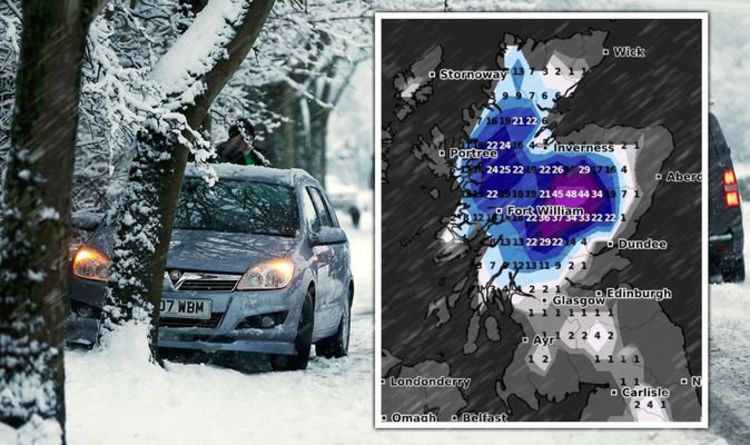 BBC Weather: Rain and snow to move in across the UK

January’s weather has been something of a rollercoaster for much of the UK, with flash flooding, heavy snow and ice seen across many parts of the country. The final weekend of January is no exception. Parts of the UK could be blanketed with up to 20cm of snow in the next couple of days, while a band of heavy rain could also trigger flooding, forecasters have warned.

The Met Office has issued yellow warnings for some areas as “significant disruption” is expected.

Travel disruption is expected across the country as the severe weather settles in today and on Saturday, with four yellow warnings currently in place.

Large swathes of the UK were blanketed in snow last weekend, with severe flooding seen down the River Severn as Storm Christoph wreaked havoc.

The Met Office has confirmed the UK has experienced its snowiest spell since January 2019, with 20 weather stations up and down the country recording accumulations of two inches of snow for three days consecutively. 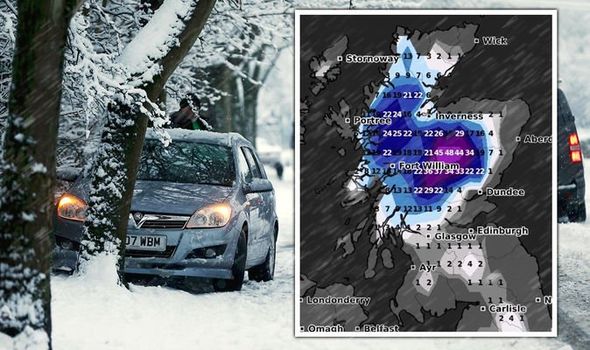 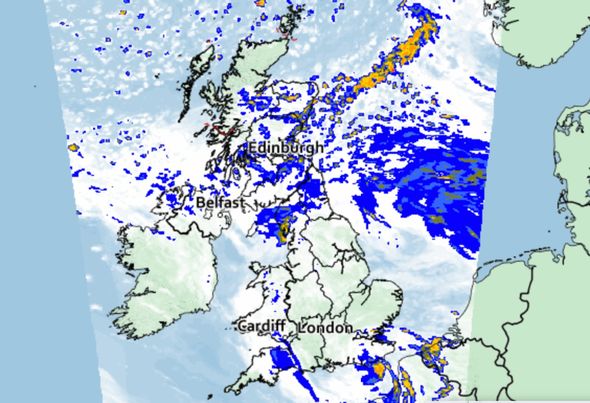 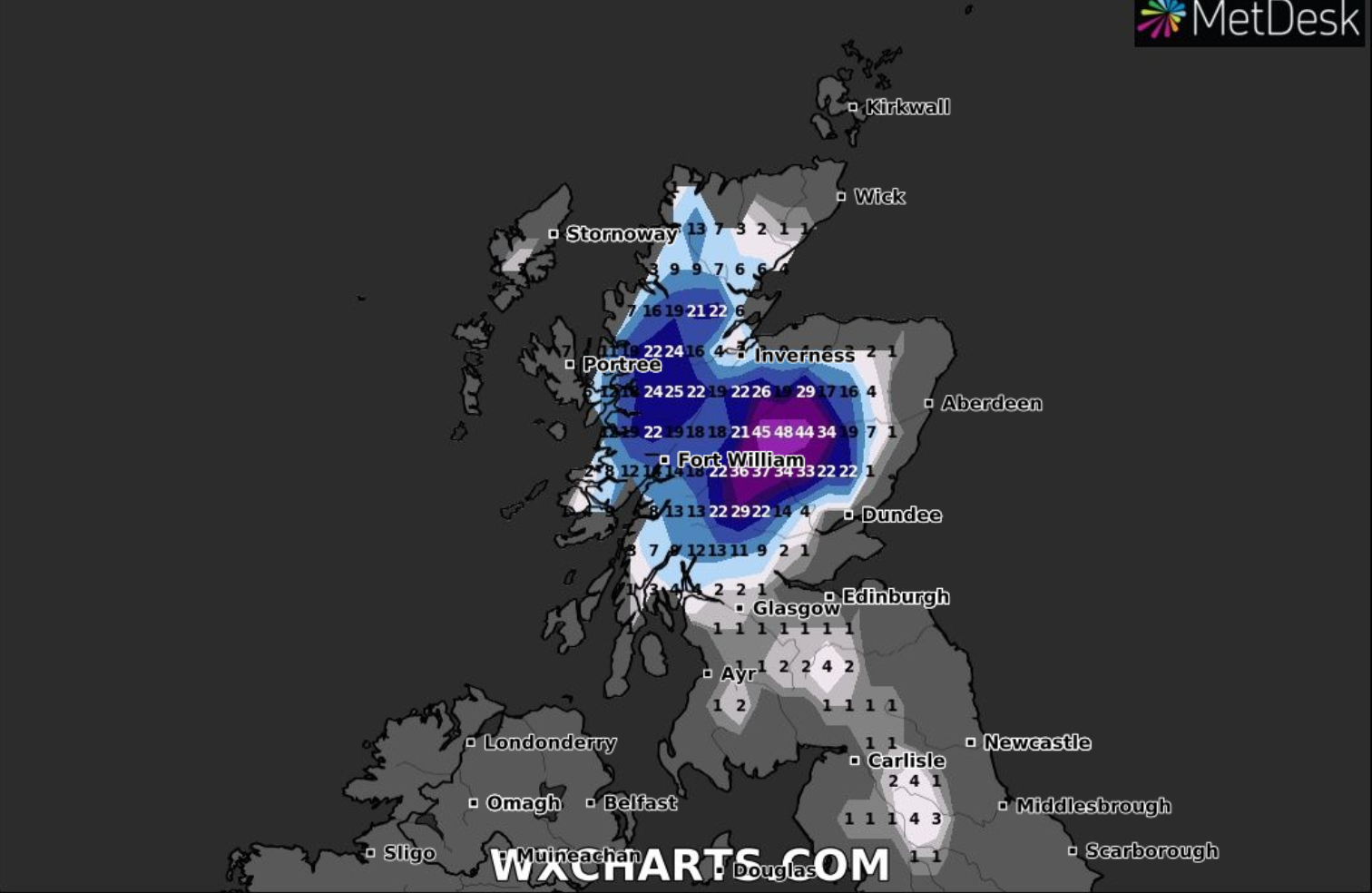 Where will it snow this weekend?

Currently, weather warnings from the Met Office are out in Scotland and the south coast of England for Friday, January 29.

The Met Office has placed a yellow warning across parts of central Scotland and the Highlands for snow, warning that rural communities may become cut off, power cuts are possible and transport services were likely to be affected.

These warnings last until midday on Friday. 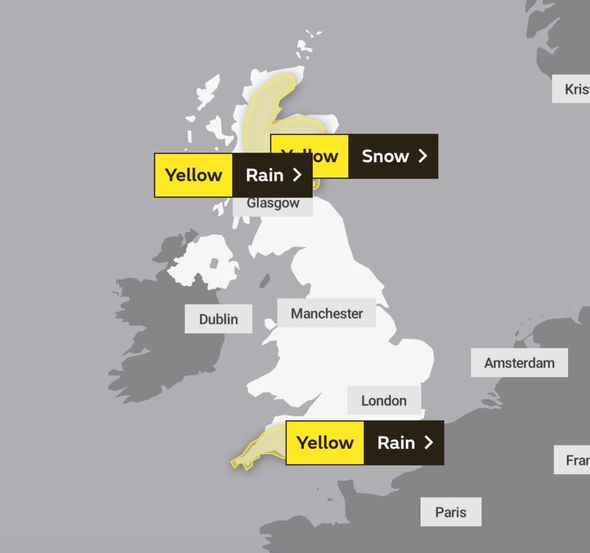 Two more warnings are in place for Friday and Saturday – one for rain across the east coast of Scotland affecting Aberdeen down to Dundee, and another covering Cornwall, Devon and Plymouth.

The warning for rain in Devon and Cornwall is repeated on Saturday, along with another for snow across much of Wales and areas in central England, including Oxfordshire and Gloucestershire.

Around 3-7cm of snow are expected on Saturday across areas such as Derby, Leicester, Oxford, Greater Manchester, Merseyside, Monmouthshire Wrexham and Caerphilly – but up to 20cm could be seen in some areas.

The warning reads: “An area of rain pushing in from the southwest through the early morning will readily turn to snow in places as it encounters colder air.

“There remains a good deal of uncertainty in how far north the rain and snow will get, before the band stalls and starts to move south again as it eases. 3-7 cm of snow is possible to low levels with the potential for 10-15 cm over high ground (above 200-300 m), mainly in Wales and the West Midlands.

“There is a very low chance of perhaps as much 20 cm over highest parts of the Shropshire and Snowdonia.”

Travel disruption is expected across all areas with a warning in place, with potential snow and surface water expected to last throughout the weekend. 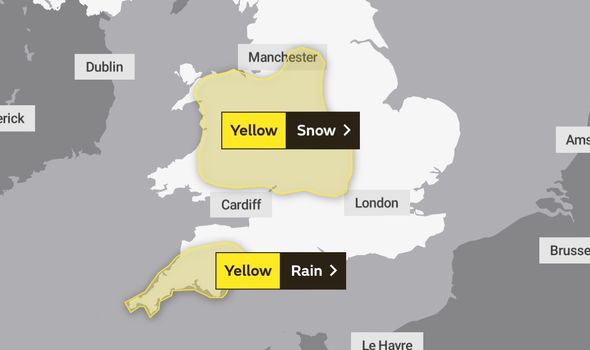 “This system has prompted a number of warnings including a rain warning for Northern Ireland, while snow warnings will be in force for parts of northern England and Scotland.

“In locations higher than 200m across northern England and southern Scotland we could expect to see around 2-5cm of snowfall, but areas of similar elevation north of Glasgow and Edinburgh could see up to 20cm of snow.”

What’s more, hundreds of flood warnings are currently out across the country, requiring immediate action from locals.

The Environment Agency has issued 53 flood warnings as well as 226 flood alerts.

Despite the miserable weather we’ve been having, brighter days are on the horizon, with temperatures set to increase in most areas following the weekend.

Milder air is due to move in from the Atlantic, with parts of southern England and Wales likely to experience weather usually seen in the spring, with temperatures potentially rising to as high as 14C.