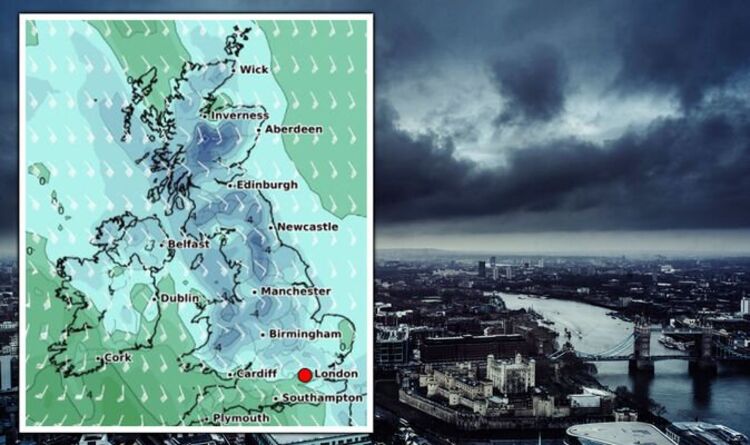 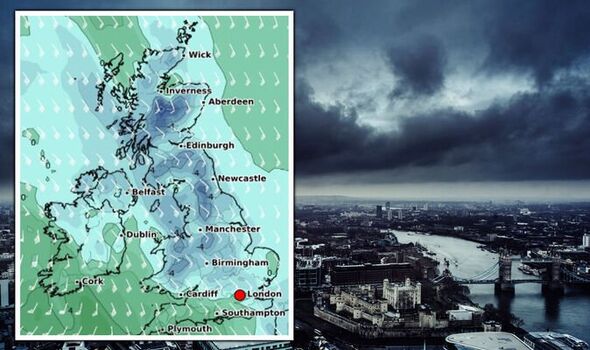 Weather experts have warned a number of storms are off the coast of Britain are set to draw bad weather conditions inland. One storm off the coast of Ireland today, on Monday, will bring some rain to Northern Ireland throughout the day, later moving into the southwest of England and Wales and western Scotland.

More attention has, however, been drawn to a second storm off the coast of Ireland which is expected to hit on Wednesday.

Tyler Roys, Senior Meteorologist and Lead European Forecaster at AccuWeather, said this could bring wind gusts of 50-60mph to Northern Ireland as well as to the western coast of Scotland and Wales.

He told Express.co.uk: “This storm will also bring another round of rain to the United Kingdom that will continue into Wednesday night.

“The heaviest rain at this point looks to be across Northern Ireland and western Scotland, some of these locations could see up to an inch of rain.”

The situation is not much better on the weather front, with minus figures expected for this evening across parts of the UK.

Brian Gaze from the Weather Outlook told the paper temperatures will drop particularly in the northern half of the country, “probably dipping down to -5C in a few spots”.

He said temperatures could even dip as low as -6C in the glens of Scotland.

READ MORE: Farmers vow to snub Boris at next election in fury at Brexit stitch-up

It will get warmer as the week goes on.

Double-digit temperatures are also expected in many parts of the country through the week.

DON’T MISS:
Boris urged to cut the ‘soundbites’ and focus on action [OPINION]
Tory civil war erupts as Scottish Conservatives REFUSE to back Boris [REPORT]
Prince Andrew legal settlement with Giuffre ‘will have been millions’ [REVEAL]

Mr Gaze told Express.co.uk: “By Thursday it could feel quite warm in central and eastern England, with temperatures reaching 16C.”

This did, however, come with a catch: “Unfortunately the higher temperatures will coincide with more unsettled weather so showers or longer spells of rain are likely at times in all of the UK.”

Colder weather is also set to return over the weekend.

Mr Dale said there will be a “reversion to colder” weather on Saturday and Sunday.

He added this was “nothing out of step for the time of year”.

There are currently no weather warnings for the week ahead from the Met Office.