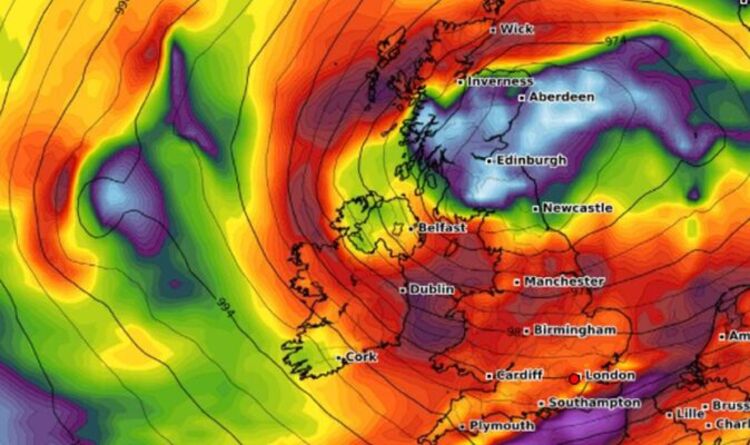 Storm Diego, named by Meteo France, will impact the southern coastal counties of England throughout Friday morning, Netweather forecaster Nick Finnis has said. This comes after the Met Office issued weather warnings for wind across the West Midlands, South West England, London and South East and East of England, in force throughout today. Meanwhile, the UK will continue to see cold weather, frost and wintry showers across the rest of this week.

The country can expect to see snow on the high ground of England, Scotland and Wales, with Mr Finnis warning that “outbreaks of rain, sleet and hill snow will spread south throughout the morning” today.

Weather forecaster WXCharts has predicted that snow will fall in Manchester, Edinburgh, most of Scotland and parts of Wales on Friday.

Up to 2.4 inches (6cm) of snow per hour will fall in northern Scotland, with up to 0.4inches (1cm) per hour in Edinburgh and Manchester.

The cold wind will cause air temperatures to feel as cold as -8C in Scotland and -4C in Wales, Newcastle and Birmingham.

Temperatures will reach lows of -4C in Scotland and -1C in the north of England, WXCharts has forecasted.

But Jim Dale, senior meteorologist at British Weather Services, told Express.co.uk that temperatures could even reach lows of -6C in parts of Scotland, -4C in parts of Wales and Northern Ireland and 0C to 1C in the midlands.

Giving an overview of the next few days, Netweather’s Mr Finnis said: “A fairly deep low moved east across Scotland last night bringing rather strong winds across many areas overnight, in its wake northerly winds will spread across the UK, bringing colder air south to end the week along with sunshine and blustery showers – which will be wintry over higher ground.

“For now, it’s been a wild night for many, with strong gusty winds reaching gale force, gusts of 60-70mph were recorded across west Wales and NW England overnight and through this morning we will continue to see gusts of 40-50mph inland across England and Wales, 50-60mph gusts possible towards western coasts of Wales and NW England.

“Meanwhile, further north across Scotland, it’s less about the wind and more about wintry weather this morning – particularly across the north.

“Outbreaks of rain, sleet and hill snow will spread south through the morning.

“Through the afternoon, remaining windy, the wind switching from westerly to northerly down the UK away from the far south, so turning colder.

“The rain, sleet and hill snow moving south across Scotland will turn more showery and generally most of the UK will see sunny spells and showers spreading south, showers wintry over higher ground.

“Winds easing this evening then breezy and cold tonight, snow showers for the far north of Scotland and north coast of N. Ireland, otherwise clear skies will lead to widespread frost.

“The exception will be across the far south – where it will cloud over, with some rain perhaps moving in across southern coastal counties of England by the end of the night.”

He added: “Storm Diego, named by Meteo France, will bring strong winds and heavy rain across northern France on Friday, the northern limit of this rain may brush southern coastal counties of England through the morning, before clearing early afternoon.

“Otherwise a chilly day of sunshine and showers spreading south on a northerly wind across the UK, showers wintry over higher ground across England and Wales, to lower levels across Scotland.

“A northerly wind will make it feel colder than 7-11C the thermometer reads.”

Mr Dale said: “There are some frosts around at night time, particularly in the north – Scotland, the Glenns, some of the areas in and around north Wales and the North.

“For most of the northern areas and parts of Wales, -1C, -2C, and Northern Ireland the same. There could be a few -3C and -4Cs – there is bound to be. Further south, hovering around 0C … with the midlands around 1C.