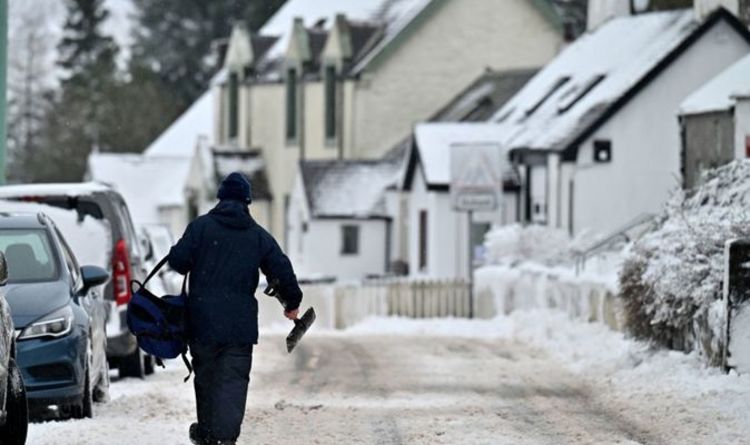 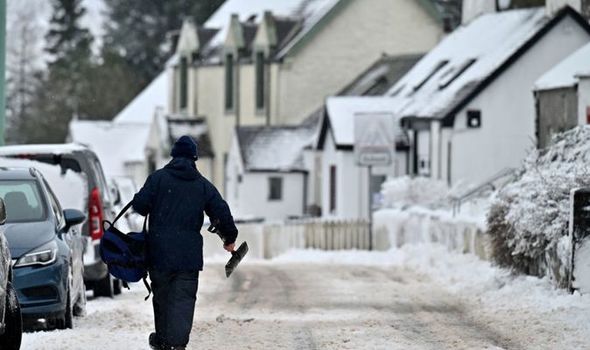 After a balmy start to the new year, forecasters say everywhere will be “noticeably colder”. Flooding is also a risk, with dozens of alerts in place across the country – mainly along the east coast.

But Met Office forecaster Simon Partridge said: “It’s basically what we should have for this time in January… it’s just that we’ve been so mild for so long that it’s suddenly a bit of a shock to the system.”

The freezing temperatures are being brought by northerly winds. And while it also means bright blue skies for many, the advice is to wrap up warm.

Parts of the far north of England and northern Scotland were already battling blizzards, snow and ice yesterday as cold air swept down from the Arctic.

Strong 70mph winds, coupled with wintry showers, led to treacherous travelling conditions in Orkney and Caithness, with a number of ferry services affected.

Temperatures in Shap, Cumbria, fell to -6C early yesterday and overnight temperatures into this morning are expected to be at a similar figure.

And a yellow weather warning is in place for snow and ice today, as far south as Dundee.

Wales is also braced for hail and snow flurries on higher ground – anywhere between the south Wales valleys and Snowdonia.

Met Office spokesman Richard Miles told the Daily Express that temperatures would fall to below freezing overnight into tomorrow, giving the UK its first widespread frost of the winter.

But he added: “There’s a ridge of high pressure, which will mean dry weather – even if it’s not clear skies – for many of us.

“There will be some showers on the east coast and a few in the West but, by and large, Wednesday will be fine. Temperatures will be around 41F (5C) except in the far north of Scotland where it will struggle to get much above freezing.

He said temperatures would rise slightly at the weekend, but the picture would be more unsettled, with wintry showers expected in between the dry spells – particularly in Northern Ireland and north of the Pennines.