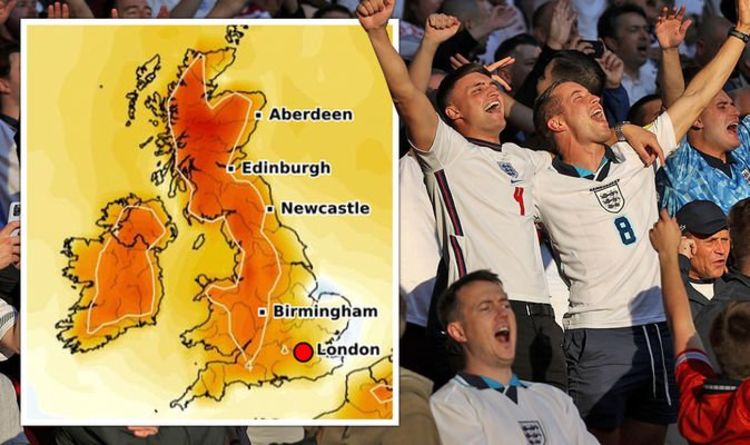 In what could be a good omen for Gareth Southgate’s squad, meteorologists have predicted the same hot temperature and showery outlook which struck Wembley Stadium on the day of the final 55 years ago. Met Office meteorologist Greg Dewhurst said: “I can tell you that on July 30 1966, the weather was very similar to what is forecast for Sunday.

“It reached around 20C and there were a few showers around.”

Mr Dewhurst added that football fans watching at Wembley and in Trafalgar Square should brace themselves for a risk of rain showers, in short interuptions to the hot weather.

He said: “We have got a bright start across much of the UK, but we’ll see outbreaks of rain developing across Wales and south-west England on Sunday morning.

“This rain will move eastwards – probably reaching the London area at around 7pm or 8pm.”

The latest heat maps from Netweather show temperatures soaring across the UK on the day of the final, on Sunday, July 10, which will be good news for people planning to watch the game outdoors in their gardens.

Sizzling hghs of 22C could hit North Yorkshire, including Leeds and Scarborough at 3pm.

Liverpool may also bask in 21C, while Essex sees highs of 19C.

Tony Zartman, a meteorologist at AccuWeather, predicted the hot weather in July to come from high pressure developing around the Azores.

He told Express.co.uk: “As we head toward the second half of July, there is opportunity for drier and warm to hot conditions to develop, especially over the south.

“High pressure will build northeast from the Azores and could reach into the southern UK during the second part of the month.

“This will likely result in drier conditions and above-normal temperatures.

“As far as how hot will it get, there is still uncertainty this far out.

“If the high ends up being stronger and extends farther north into the UK, then it could be even warmer across southern areas.”

The BBC’s weather forecast for tomorrow added the heat could stick around, with a “heatwave” on the way.

The forecast said: “So far July has seen a cool and unsettled weather pattern for the UK, and this is likely to continue into next week.

“However, high pressure is expected to build in later next week and stick around for a while, providing some drier, sunnier, and warmer days that feel a bit more summer-like.

“During this time, there is a slight chance for a heat wave, but only if conditions line up perfectly.”