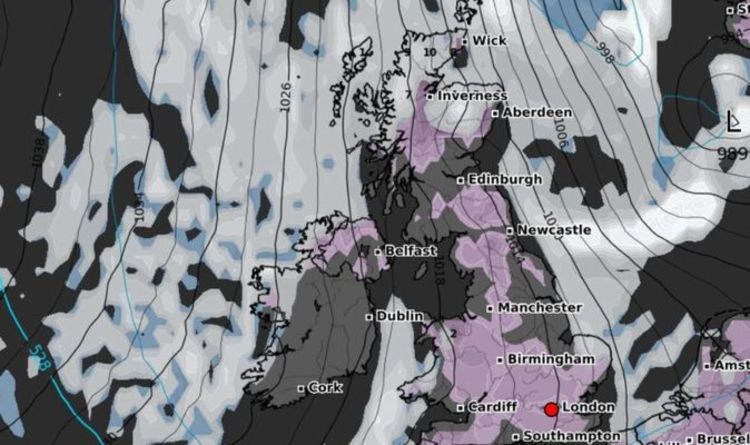 BBC Weather: Arctic air to interrupt heatwave ahead of Easter

BBC Breakfast host Rachel Burden predicted the UK to be blasted with a “mini-heatwave” this week. Met Office forecasters also said the southeast of England could see temperatures climb to 24C on Tuesday. Chief Meteorologist Andy Page said: “In sheltered central and southern parts of the UK, weather conditions will be much calmer with temperatures climbing in the March sunshine to highs into the low 20s, with the possibility of 24.0 C in southeast England by Tuesday.” But Brian Gaze, a forecaster at Weather Outlook, warned the warm temperatures may be shortlived as he shared a map suggesting -12C to strike Kent in the south of England on Tuesday, April 6.

He wrote on Twitter: “Insane depth of cold on the GFS12z.

“Will be a cold outlier for sure”

The map also showed temperatures plunging further in the north of the UK on the same day. 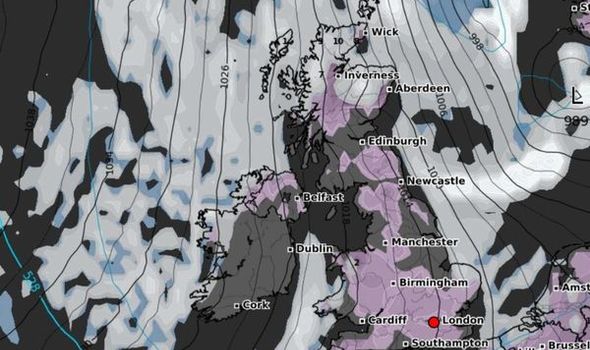 Scotland could see a freezing -14C, while Yorkshire, Manchester and Liverpool are hit with -12C as well.

Cumbria in the north-west could shiver at -13C.

In a separate forecast, Mr Gaze added that wintry conditions including snow could even hit the UK as Easter arrives.

He said: “Through Wednesday outbreaks of rain spread southwards and they reach central areas in the afternoon. 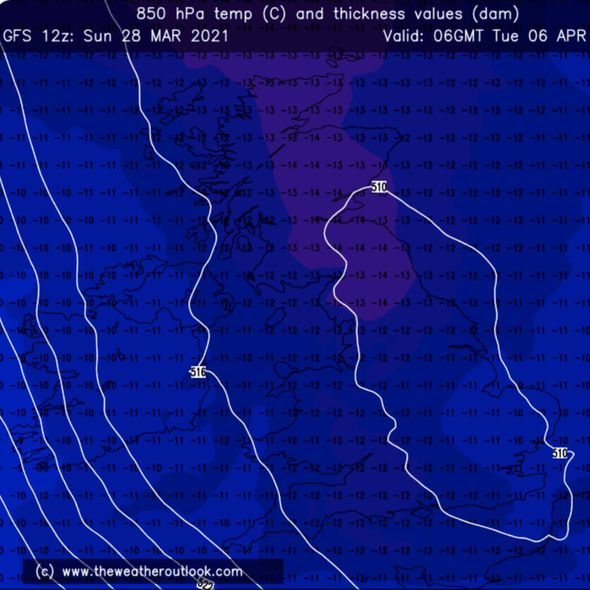 “To the north much colder conditions develop and showers start to turn wintry. In southern counties it will be another very mild or even warm day.

“During the rest of the week high pressure builds to the west.

“That leads to the likelihood of cold air moving southwards over the UK.

“The risk of sleet or snow could return in time for the Easter weekend.” 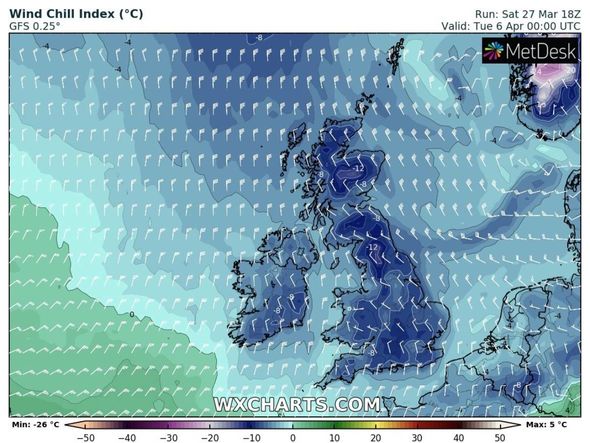 The BBC’s long-range forecast between Saturday, March 27 and Sunday April 4 added: “Next week will start off with a high pressure system that has been building in mainland Europe this week strengthening into the UK, bringing light winds and milder air.

“Temperatures will climb well above average for the first half of the week, reaching into the low twenties for parts of the Southeast.

“This will also come with dry, largely sunny weather, although northern Scotland will still see weather fronts and some patches of rain.

“The warmer air will be short-lived though, as a cold front is set to arrive around midweek. 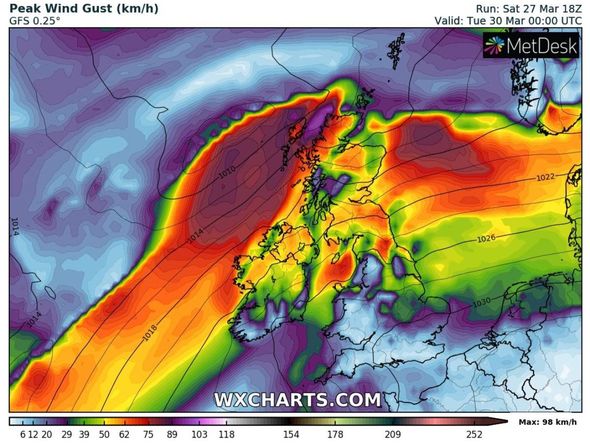 “There is still some uncertainty on the exact timing, but the front should sweep southwards across the UK either Wednesday or Thursday afternoon.

“The colder air mass behind the front will be a stark difference from the very mild air it replaces, with afternoon highs dropping as much as 10 Celsius is some places!

“Heading into the Easter holiday weekend, the weather will likely be a few degrees colder than normal but largely dry with patchy cloud.

“There is a chance of some scattered showers for northern and eastern areas, and these could bring some lowland snow if they develop.” 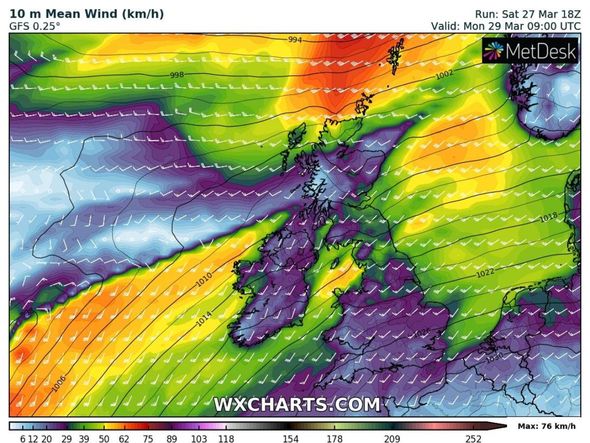 The Met Office added temperatures could start to become warm again during the middle of April.

The forecast between Friday, April 3, and Sunday, April said: “Widely fine conditions are expected across the British Isles on Friday and Saturday with plenty of dry weather and sunny spells for most.

“Temperatures will be around or a little below average for the early part of April, with some chilly nights.

“It will likely turn colder and more unsettled from the north by the start of the following week. All areas of the UK are likely to see spells of rain and stronger winds.

“Some wintry showers are possible too though any snow is most likely over hills in the north of the country. After a colder spell, temperatures will probably start to return back closer to average towards the end of this period.”