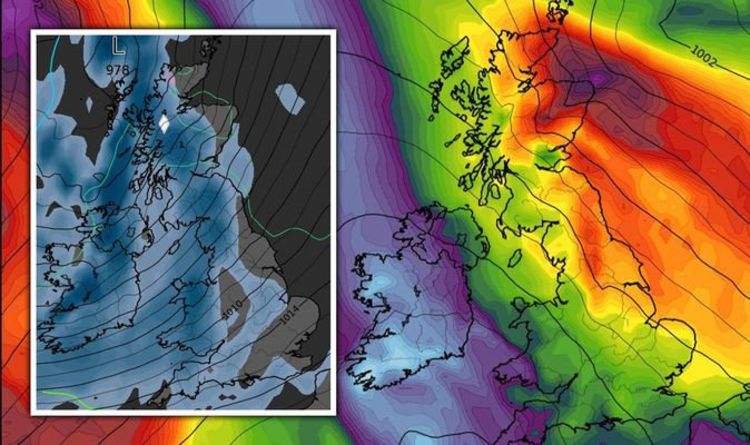 A US National Hurricane Centre (NHC) map shows tropical Storm Wanda is expected to bring sustained winds to the country by Tuesday. However, heavy winds are set to strike the north of England after Scotland’s gale force winds by 3pm today.

According to WXCharts maps, pressure from the northwest will begin to push the heavy winds battering Scotland down the west of England.

By 3pm, 94km/h gusts will be felt in Aberdeen, with Newcastle and Manchester being blustered by 62km/h gusts.

Storm Wanda is also expected to “indirectly influence the forecast for early next week” according to the US NHC.

WXCharts maps show much of Britain sees 50km/h gusts by 9pm on Monday, with potential for 62km/h winds at the north of Wales in parts of the northeast coast of England.

Met Office forecaster Dan Harris also noted “Tropical Storm Wanda is not too far from the UK – and may indirectly influence the forecast early next week”.

In an update from their press office, the Met Office added: “On Sunday night Wanda is expected to weaken and be downgraded to a non-tropical feature, and what is left of this storm will become embedded within a larger Atlantic frontal zone.

“This frontal zone moves across the UK on Tuesday and Wednesday.

“This Atlantic frontal system is not expected to have too great an impact on UK weather but could lead to some of rainfall in some places, and potentially some weather warnings,

although the timing and track of the system is still uncertain.”

Netweather and STV forecaster Jo Farrow added: “If Wanda gets caught up with another Atlantic low pressure, its tropical energy could help bring wet and windy weather to the UK.”

She also said: “Early next week (Wanda) could turn northwards after its extratropical transition at the weekend.

“If it gets caught up with another Atlantic low pressure which heads towards Iceland by Tuesday, then its tropical energy could be added into the mix for our UK weather.

“That would bring wet and windy weather again by midweek, but confidence is low.”

In the weeks ahead, maps show the UK is set to be drenched in heavy rains, after a change in pressure.

Maps from WXCharts show the week starting November 8 will have wind gusts up to 50mph throughout England, but much of the country will be dry.

However, charts show that from 6am on Sunday November 14, heavy rains will start to push across from the Atlantic, with up to 3mm of rain an hour striking Northern Ireland and the east coast of Scotland.

By Monday November 15, much of the country is set to soak from midday, with 5mm of rain an hour along the entire east coast of Britain and across Northern Ireland.

By 6pm, the weather front will have brought snow to parts of Northern Ireland and Scotland, with 3cm on the ground, with the heaviest rains pushing into the south east of England.

In their forecast from November 11 to November 20, the Met Office said: ”Areas of low pressure lying to the north or northwest of the UK will bring changeable autumnal conditions at the start of the period.

“A weak band of rain across England and Wales will give way to brighter and drier interludes, with showers, longer spells of rain and occasional strong winds in the northwest.

“There is an increasing risk of heavy, blustery showers in the north, whereas the driest and brightest weather is likely to be in the southeast of the UK, with rain spreading to some areas at times.

“Temperatures around average throughout this period, although milder interludes will be more prevalent at first, and colder interludes increasingly possible later, where some wintry conditions are possible over higher ground in the north, with a slight risk at lower levels.”

A yellow weather warning for wind remains in place for Scotland on Sunday, and lasts until 5pm.The warning states: “Strengthening west to north westerly winds will bring gusts of 60-70mph perhaps locally 80mph, to exposed locations of northern Scotland.

“These winds initially across the Western Isles and north west mainland Scotland on Saturday evening, spreading in combination with high spring tides this is expected to lead to large waves around the coasts. Winds gradually easing through Sunday afternoon.”