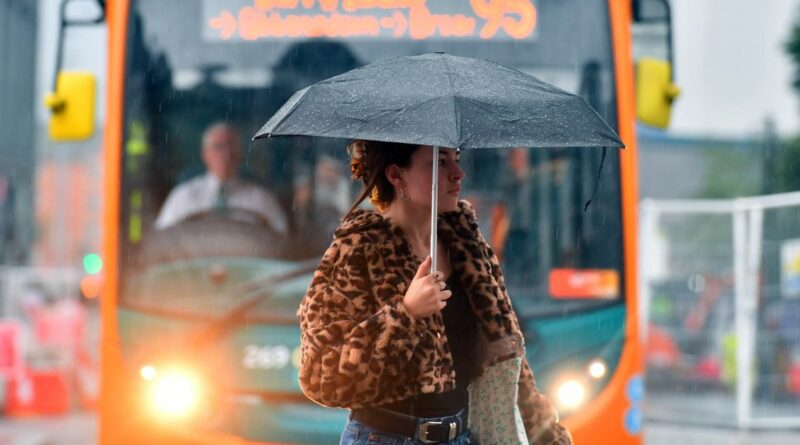 The September heatwave is now well and truly a thing of the past, with harsh winds and heavy showers expected for most of the UK today and the threat of snow lurking in October.

Early birds rising on Thursday may be the only ones to experience some dry weather today before the fierce wind carries rain across the country.

Early morning temperatures will be highest in the west, hitting 10C to 11C in Northern Ireland, Manchester and Wales where it is expected to be cloudy. Without that cloud coverage, the rest of England should drop as low as 5C to 6C, and Scotland is expected to be around 7C. As the morning progresses, Met Office meteorologist Clare Nasir explained: "Through the morning across Scotland rain sweeps ever north-eastward, perhaps a slither of sunshine for Orkney and Shetland just for a time.

"We see some heavy showers, that rain extends across much of northern England, Wales and the Midlands. For Northern Ireland, it's a slightly drier start to the day but showers never too far away.

"You can see the rain just pushing towards the eastern counties of England and East Anglia, where you'll see some patchy rain. Patchy rain also for much of central-southern England."

As we move into the afternoon, a trailing cold front carried by strong winds will make its way across the UK from the west, bringing in another bout of showers for much of England and Wales.

Rain will also fall in Northern Ireland come the afternoon.

Despite the gloomy picture, temperatures won't be too bad for this time of year and look set to be slighter higher than yesterday. The south of England and Wales look set to hover around 17C to 18C in the cities, with the midlands, the north and parts of Scotland settling at around 15C to 16C.

Nasir continued: "Gales in northern and western parts of Scotland as we head through to Friday

"[Going into Saturday] England and Wales, again more cloud, some heavy rain for a time, and the risk of gales particularly across Channel Coast."

As grim as today's forecast sounds, things could soon go from bad to worse with the threat of snow heading into October.

Weather experts at the Met Office predict temperatures to be 10C down compared to a week ago.

This Morning's Dave The Weatherman explained: "There's a snow moon on the 29th of October, followed by two more snow moons in the first three weeks of November.

"So it is going to be bitterly cold and very frosty.

"That's bad news for people with gas and electric because your bills are going through the roof."