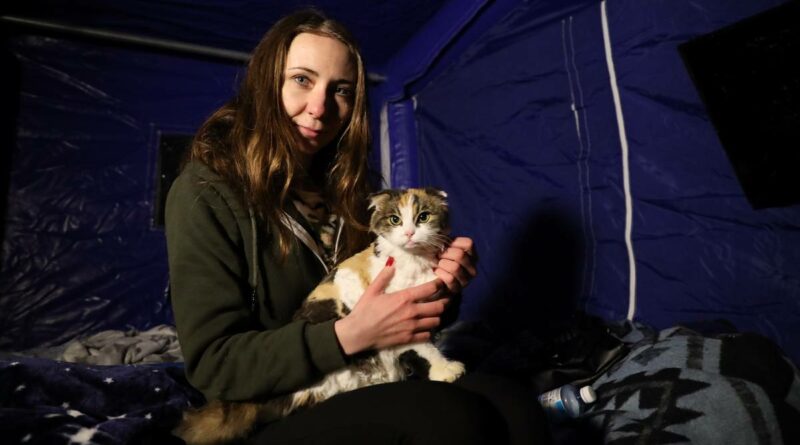 The NZ Herald is joining forces with World Vision to help as more than two million Ukrainian women and children flee their country in the world’s fastest-growing humanitarian emergency since the Second World War. World Vision Emergency Communications specialist Brianna Piazza reports on the refugee exodus from the Ukraine-Romania border.

On the border of Ukraine, in the Romanian town of Siret, dozens of large tents line the snow-covered landscape.

Erected in the last two weeks as the town has become a hub for refugees fleeing the conflict in Ukraine, the tents provide a temporary respite for those who have been on their feet for days on end escaping the horror which has taken over their homeland.

The tents are basic, some with chairs, blankets and heaters inside where refugees can pause, sit down, warm their hands and feet, and regroup.

For many it is the first time they have stopped since bombs and gunfire forced them to leave their homes with nothing but the clothes on their back. They come
in exhausted, many are shellshocked, their entire world having been turned upside down.

It is in one of these tents that I meet 33-year-old Ania, from Ukraine’s capital Kyiv.

Ania catches my eye as she is holding a large tabby cat on her knee. It’s not uncommon for refugees from Ukraine to bring their beloved family dogs with them, but this is the first time I have seen someone with a cat. Ania tells met that her cat’s name is Cindy, and that there was no chance she would have left her behind.

“Oh no, that’s my baby! How could I? She’s part of our family. I didn’t even think about leaving her, not even with a neighbour. In a day, who knows, they could leave as well.”

She tells me that as her life has unravelled, her cat has been a great source of comfort.
“She kept me warm on the long journey here. When she was calm, I was calm. She made me feel safe.”

Your urgent donation will provide vital essentials for children & families affected by the crisis in Ukraine. Please click here to donate now at worldvision.org.nz

As she strokes Cindy, she starts to talk about the mental anguish she felt as the conflict drew closer to her home.

“Initially we didn’t want to leave. I really wanted to stay. But then the situation started to get worse – people were dying, schools, hospitals, ambulances were bombed, missiles launched into towns.”

“Living through that, it was so hard. You can’t sleep properly as you go underground and stay there for 12 hours.

“It’s wet and cold. You sleep on the concrete. You have blankets and some clothing but it’s still freezing cold. You’re just waiting there, not knowing if your street might be next.

“You watch the news and hear the siren again every time a missile launches. You go mad. It’s an insane way to try to exist.”

Ania is fortunate, her husband Raj made it to safety with her. Most of the refugees fleeing are women and children, and I have heard too many harrowing stories of wives having to leave their husbands behind to fight, not knowing when, or if, they will see them again. Children clinging on to their fathers, not understanding why they are not coming with them.

Raj is Iranian, so as a foreign passport holder he is allowed to leave the country he now calls home.

While having her husband beside her brings Ania great relief, pain is etched on her face as she tells me that her sister and two young nephews are still in Ukraine.

“My sister stayed there, with her two baby boys. She lives in a small town on the border of Russia, and it is very dangerous there now, it’s almost impossible to leave. She was planning to leave but she was scared to travel with her sons.

“To leave or not to leave is a hard decision to make because it’s a long and very dangerous trip. She thinks maybe she’s safer at home, rather than risking her and her babies’ lives by trying to escape.

“What can she do? To stay is dangerous, to go is dangerous. How do you make that choice?”

Ania and Raj are considering trying to make their way to Iran, where Raj’s family live.

However, Ania’s greatest hope is that she can one day return to Ukraine.

“I love my country. I adore it. I was born there, so I will live there forever. I just want to stay safe now, but as soon as this hell finishes, I will return. I don’t know when this will happen… but I hope it’ll be soon.”

Before I leave, I ask Ania if she feels any relief now that she is sitting here across the border in safety.

“Relief? No. There is no relief because my soul hurts. Yes, I am safe physically because I’m in a safe place. But the people closest to me stayed in Ukraine. My sister stayed there. My nephews stayed there.

Your urgent donation will provide vital essentials for children & families affected by the crisis in Ukraine. Please click here to donate now at worldvision.org.nz