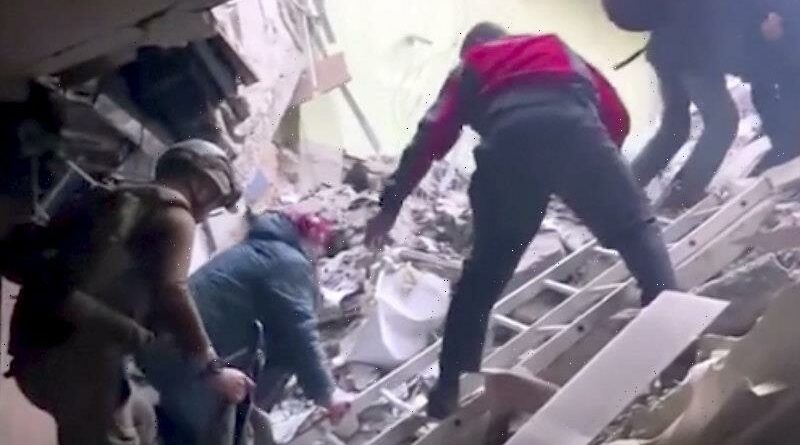 Zaporizhzhia: A Ukrainian fighter holed up the city of Mariupol said that up to 200 civilians remained trapped inside bunkers in the Azovstal steel works after a United Nations-led evacuation operation to save civilians from the site.

Captain Sviatoslav Palamar, 39, a deputy commander of Ukraine’s Azov Regiment, said on Tuesday (AEST) that his fighters could hear the voices of people trapped in bunkers of the vast industrial complex. 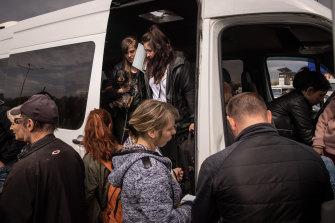 People disembark a van to be registered by police after arriving at an evacuation point for people fleeing Mariupol.Credit:Chris McGrath/Getty Images

He said they were women, children and elderly people, but that the Ukrainian forces there did not have the mechanised equipment needed to dislodge the rubble, he said. Reuters was unable to independently verify his comments.

The Mariupol council also said the evacuation of civilians from the city had been delayed, with several buses failing to reach the agreed pickup point on time.

Earlier, the first civilians evacuated from the bombed-out steel plant that has become the last stronghold of Ukrainian fighters in Mariupol slowly made their way toward safety, as others who managed to escape the city described terrifying weeks of bombardment and deprivation.

More than 100 civilians — including elderly women and mothers with small children — left the sprawling, rubble-strewn Azovstal steel mill and set out in buses and ambulances for the Ukrainian-controlled city of Zaporizhzhia, about 230 kilometres to the north-west, according to authorities and video released by the two sides.

Mariupol Deputy Mayor Sergei Orlov told the BBC that the evacuees were making slow progress and would probably not arrive on Monday as hoped for. Authorities gave no explanation for the delay.

At least some of the civilians were apparently taken to a village controlled by Russia-backed separatists. The Russian military said that some chose to stay in separatist areas, while dozens left for Ukrainian-held territory.

In the past, Ukraine has accused Moscow’s troops of taking civilians against their will to Russia or Russian-controlled areas. The Kremlin has denied it. 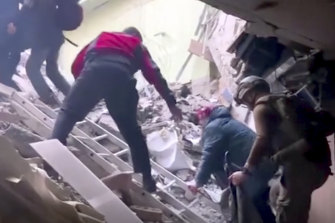 The steel-plant evacuation, if successful, would represent rare progress in easing the human cost of the almost 10-week war, which has caused particular suffering in Mariupol. Previous attempts to open safe corridors out of the southern port city and other places have broken down, with Ukrainian officials accusing Russian forces of shooting and shelling along agreed-on evacuation routes.

Before the weekend evacuation, overseen by the United Nations and the Red Cross during a brief cease-fire around the steelworks, about 1000 civilians were believed to be in the plant, along with an estimated 2000 Ukrainian defenders. Russia has demanded that the fighters surrender; they have refused.

As many as 100,000 people overall may still be in Mariupol, which had a pre-war population of more than 400,000. Russian forces have pounded much of the city to rubble, trapping civilians with little food, water, heat or medicine.

Some Mariupol residents got out of the city on their own, by way of often damaged private cars.

A majority of the dozen Russian battalion tactical groups that had been around Mariupol have moved north to other battlefronts in eastern Ukraine, according to a senior US defence official who spoke on condition of anonymity to describe the Pentagon’s assessment. The official said Russian forces made minimal gains over the weekend.

In other developments, European Union energy ministers met to discuss new sanctions against the Kremlin, which could include restrictions on Russian oil. But some Russia-dependent members of the 27-nation bloc, including Hungary and Slovakia, are wary of taking tough action.

Ukrainian President Volodymyr Zelensky said he hoped more people would be able to leave Mariupol in an organised evacuation. The city council told residents wanting to leave to gather at a shopping mall to wait for buses.

Zelensky told Greek state television that remaining civilians in the steel plant were afraid to board buses because they feared they would be taken to taken to Russia. He said he had been assured by the UN that they would be allowed to go to areas his government controls.

In the wake of the evacuation from the plant, Russian forces resumed shelling there, according to one of the defenders.

“Several dozen small children are still in the bunkers underneath the plant,” Shlega said.

Thwarted in his bid to seize Kyiv, the capital, President Vladimir Putin has shifted his focus to the Donbas, Ukraine’s eastern industrial heartland, where Moscow-backed separatists have been battling Ukrainian forces since 2014.

Russia said it struck dozens of military targets in the region in the past day alone. It said it hit concentrations of troops and weapons and an ammunition depot near Chervone in the Zaporizhzhia region, which lies west of the Donbas.

Zelensky’s office said at least three people were killed in the Donbas in the previous 24 hours. The regional administration in Zaporizhzhia reported that at least two people died in Russian shelling.

The governor of the Odesa region along the Black Sea Coast, Maksym Marchenko, said on the Telegram messaging app that a Russian missile strike on an Odesa infrastructure target caused deaths and injuries. He gave no details.

Ukraine claimed to have destroyed two small Russian patrol boats in the Black Sea. Drone footage online showed what the Ukrainians described as two Russian Raptor boats exploding after being struck by missiles.

UEFA, the European soccer’s governing body, has banned Russia from the Women’s European Championship in July and from participating in qualifying for next year’s World Cup following the country’s invasion of Ukraine, said on Tuesday (AEST).

Portugal will replace Russia for the July 6-31 tournament in England, having lost to them in the qualifying play-offs. They will join the Netherlands, Sweden and Switzerland in Group C.

UEFA also ruled Russia’s bid to host the men’s Euros in 2028 and 2032 ineligible, which means Britain and Ireland’s joint bid to host Euro 2028 is rivalled only by Turkey, who also declared an interest in hosting the 2032 tournament.

US First Lady Jill Biden said she is heading to Romania and Slovakia later this week to visit with Ukrainian families who fled for their lives after Russia invaded their country in hopes of sending the message, despite language barriers, “that their resilience inspires me.”

The White House announced she will spend Mother’s Day meeting Ukrainian refugees, most of whom are women and children.