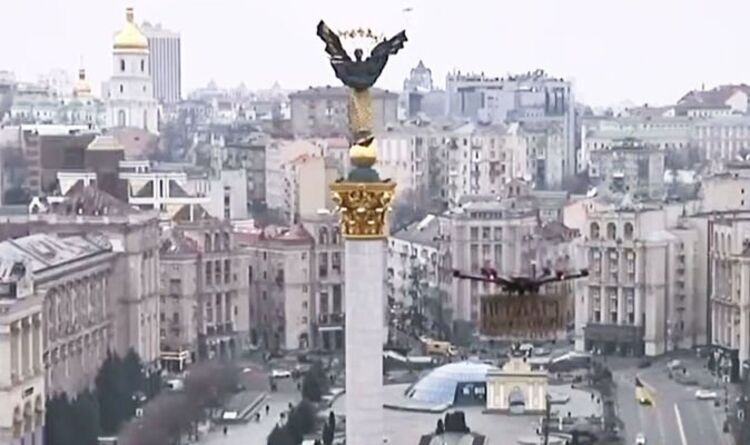 The live stream of Kiev’s Maidan Square in Ukraine was launched amid increasing concerns there would be an imminent attack by Russia. But one jokester had other ideas for the live stream and used a drone to advertise a garage. The “garage on Solomenka” was reportedly accompanied by the phone number of the Russian embassy in Kiev.

Twitter users were quick to notice the change to the live stream and soon commented on it.

While Michael Slavitch pointed out: “That’s the address of the Russian embassy.”

Edmilson Barbosa added: “This is the troll of the year so far.”

The UK has seen intelligence that suggests Russia is planning to launch an invasion of Ukraine and Russian President Vladimir Putin’s plan has, in effect, already begun, Prime Minister Boris Johnson’s spokesman said on Monday.

They said: “The intelligence we are seeing suggests that Russia intends to launch an invasion and that President Putin’s plan has already begun.

“We’re seeing seen elements of the Russian playbook that we would expect to see in certain situations, starting to play out in real-time.”

He said the UK had offered no constructive solutions, contrasting the efforts of Boris Johnson’s administration with French President Emmanuel Macron and German Chancellor Olaf Scholz, who are both perceived to have a softer position towards Russia than the UK or US.

But he could see “no UK role in search of constructive solutions”.

‘Weak’ Biden seen as a ‘pushover’ by Putin who can mobilise 150,000 [INSIGHT]
Britain to deploy tanks and troops to Estonia as Russia crisis deepens [ANALYSIS]
Brit stuck in Ukraine with family fears he has been totally abandoned [VIDEO]

While the French and Germans were doing that, “as for the UK, I’m seeing nothing”.

The visit of Defence Secretary Ben Wallace was “much more diplomatic”, he suggested.