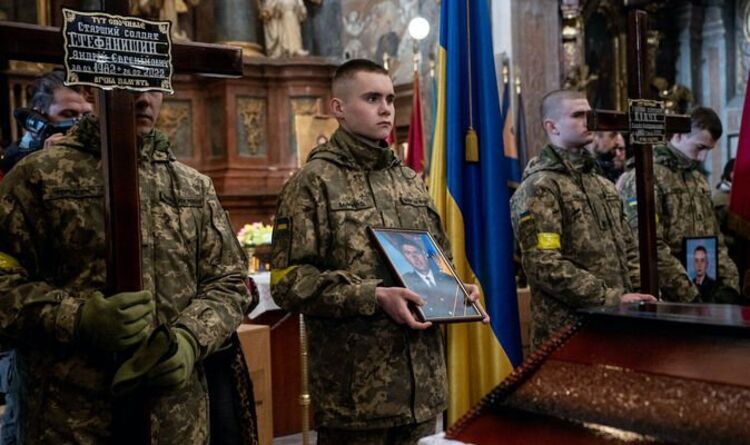 Ukrainian President Volodymyr Zelensky has provided stiff resistance against Putin’s onslaught since February, holding off an invasion reportedly meant to take days. Russian forces appear to have stalled on their approach to Kyiv, where defenders have stopped a miles-long convoy from wreaking havoc following a series of blistering close quarter attacks. The effort has allowed them to make a dent in the troop numbers at Putin’s disposal but unfortunately racked up a growing death toll on their own side.

Ukraine’s impressive resistance comes on behalf of a diverse fighting force made up of seasoned soldiers and recent conscripts following a call for action from President Zelensky.

Thousands of people have signed up to fight for their country since the invasion began, and others have joined them from overseas.

Unfortunately, the breadth of the invasion and aggressive fighting on the border with Russia means that thousands more have died.

After declining to give a definite number last week, a Ukrainian MP supplied a death toll estimating the number early this morning.

Posting at 8.20am, Lesia Vasylenko, an MP for the political party Goloszmin, revealed the number in a Twitter post.

She called the soldiers “brave heroes who fought bravely for our land”, and thanked them for their service.

They don’t bear the weight of Ukraine’s losses alone, however, as hundreds of civilians have also died.

The grim reality of the war is highlighted both by pictures of soldiers carried in caskets through the streets of Ukraine and in those showing the burnt-out shells of civilian homes.

Over the last few weeks, Russian rockets have landed on residential buildings, most notably a maternity hospital last week.

Official numbers from the organisation have estimated 596 deaths as of midnight on Saturday, March 12.

Of those, 553 were adults, and the remaining 43 dead were children.

The UN also estimated that 1,067 civilians, 57 of whom were children, were wounded in the conflict.

That number is likely much higher in reality, given the difficulty officials face counting in an active war zone.

UN officials said it could be “considerably higher” than current estimates.

They blamed most deaths on explosive weapons with a “wide impact area” such as artillery and rocket systems.

The Russian death toll is, ultimately, tougher to estimate, with numbers differing depending on the source.

The Putin administration has reported 487 deaths and 1,597 deaths since early March, while Ukrainian intelligence claims 12,000 and US officials between 5,000 to 6,000.