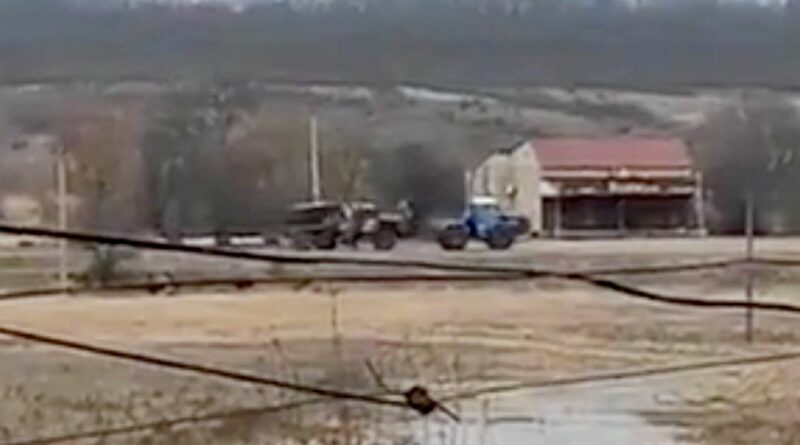 Ukrainian farmers have been hailed for their resistance after a tractor was filmed towing a Russian rocket launcher.

TikTok user Sergey Arbuzov who describes himself as a "boy from the village", recorded himself singing as he watched farm machinery pull a heavily armoured vehicle from across a field.

The clip, which has been since been viewed over 130,000 times on Twitter, is not the first time farmers in Ukraine have confiscated military equipment from invaders and been praised for it.

Ukrainian MP Lesia Vasylenko was one of the more high profile figures to laugh at a previous video of a similar incident last month. She wrote: “A bit of humour before toughest talks: farmer steals tank.

“Scrap metal is very valuable in #Ukraine so people are very excited about all the money they can make by getting hold of enemy weapons #LoveUkraine.”

Elsewhere in the country just a few days later a pair of big green tractors were seen stealing a surface-to-air missile launcher.

A man was filmed desperately running after the equipment worth a staggering £18million.

The latest footage to go viral was first uploaded by Sergey to TikTok on March 5 but it has taken over a week to go viral thanks to larger Twitter accounts.

One of them, oryxspioenkop, shared the video with the caption: "Ukrainian farmers are now arming themselves with abandoned Russian 122mm BM-21 Grad multiple rocket launchers (MRLs)."

Followers of the military account were particularly impressed by agricultural workers adding to their arsenal over the past fortnight as Russia continues to wage war on Ukraine.

One Twitter user said: "Ukrainian farmers are going to be the 3rd best equipped military in the world soon."

"Wonder if they get to keep the equipment? That would be entertaining and well deserved," another asked.

A third has become such a fan of the unlikely resistance that they want an online encyclopaedia page dedicated to it.

They said: "I want people make a wiki page for Ukrainian Farmer army."

Others made a joke about how a Russian tank may actually come into good use as farming equipment.

"That will probably get the job done when you need to scare off some birds," someone quipped.

Another exclaimed: "Ploughing fields just got a whole lot quicker."