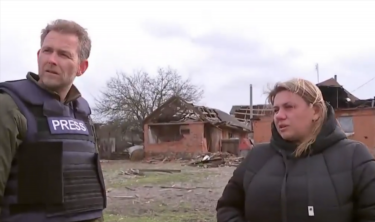 Ms Beschastna spoke of the horrific rapes of two Ukrainian sisters aged just 15 and 16 at the hands of Russian soldiers. The Deputy Mayor held back tears as she told accounts of women and girls cutting their hair to try and be less attractive to Russian soldiers. Russia has been accused of dozens of war crimes since the beginning of the invasion 5 weeks ago. Calls from Western political Governments for the crimes to be recorded and accounted for have been coming in fast, as Russian Government officials deny the accusations.

ITV reporter Dan Rivers said: “Marina is the Deputy Mayor here and has heard grim accounts of how Russian soldiers treated women in the area.”

Ms Beschastna said: “There was a case in one village where two sisters were raped: girls aged 15 and 16… children.

“Women were pulled by their hair out the basement so soldiers could abuse them.

“Girls started cutting their hair short to be less attractive, so no one would look at them anymore.”

Accounts of the abuses of women and children at the hands of Russian troops have been coming in constantly.

Ukrainian President Volodymyr Zelensky begged the West to intervene and stop Russia from committing further atrocities against the innocent people of Ukraine.

Mr Zelensky said: “On our land, there has been concentrated evil.

“Murderers. Torturers. Rapists. Looters. Those who call themselves an army. And who deserve only death for their actions.

“I want every mother of every Russian soldier to see the bodies of those who have been killed in Bucha, in Irpin, in Hostel.

“What did they do? Why were they murdered? What did the man riding his bike on the road do?

“Why were ordinary citizens questioned and tortured to death in an ordinary peaceful city?

“Why were women strangled after their earrings were ripped out of their ears? How could women be raped and murdered in front of their children?

“Their bodies tortured even after their deaths? Why did tanks crush the corpses of people?”

The Ukrainian ambassador to Estonia Mariana Betsa took to Twitter to speak out about the crimes against women and children that Russian soldiers had been committing.

“They burned the bodies. Second foto – Mykolayiv. A 3-year old Arina (with signs of rape) on top of her 17-years old sister Veronica. Russia should be accountable for the genocide of Ukrainians.”

The accusations from Ms Betsa’s Tweets were backed up with more evidence of the evil war crimes by Ukrainian MP Lesia Vasylenko: “Russian soldiers loot, rape and kill.

“10 y.o. girls with vaginal and rectal tears. Women with swastika-shaped burns. Russia. Russian Men did this.

“And Russian mothers raised them. A nation of immoral criminals.”

Following the emergence of the horrific images, Ukrainian MP Kira Rudik voiced her frustration at commentators suggesting an investigation in accordance with rules of war should go ahead.

She said: “Are you talking about the Geneva Convention to me about people who, who killed women and children correct women in front of the children.

“The world is watching how we are dying and talking about Geneva Convention!

“Maybe you should call Putin and talk to him about the Geneva convention!”