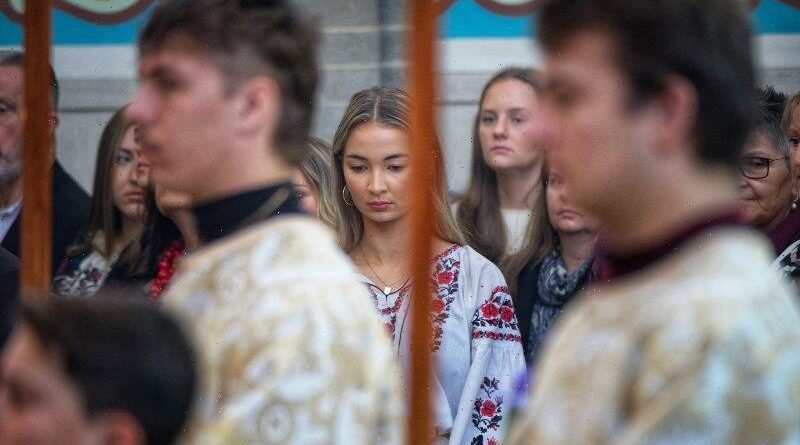 On a sunny Sunday morning in Melbourne’s inner-north, Svitlana Solovey and her family marked Orthodox Easter thousands of kilometres from home.

When conflict broke out in Ukraine, they lived for a week in a bunker, sleeping on mattresses on the cold floor while Svitlana tried to help her seven-year-old daughter continue her school lessons. Before long, they realised they had to leave. 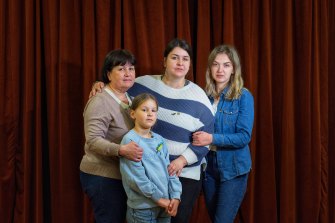 While waiting for the train to Poland, there was bombing near the station, and they spent the trip lying on the floor of the carriage, terrified they would be hit.

But after a long and tumultuous few months, they arrived in Melbourne three weeks ago. Svitlana’s husband remains in Ukraine, calling his family every day to check they are OK.

On Sunday, in a large room decorated with Ukrainian flags and filled with platters of cured meats, cheese and bread at Saints Peter and Paul Ukrainian Catholic Cathedral in North Melbourne, the family said they were happy and grateful to be celebrating Easter in Australia.

“We don’t feel we are guests here, we feel that we are at home here,” said Svitlana. 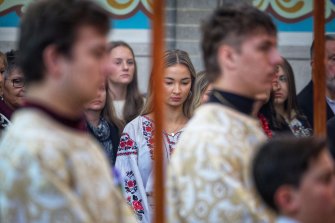 After two years of disrupted services due to the pandemic, churchgoers gathered for Orthodox Easter.Credit:Luis Enrique Ascui

After two years of disrupted services due to the pandemic, Orthodox Christians from all backgrounds across Victoria gathered on Sunday for Easter, a day of feasting that marks the resurrection of Christ.

Orthodox Christians adhere to the Julian calendar rather than the Gregorian calendar to calculate dates.

Churchgoers from the Ukrainian community were happy to be back, bringing beautifully decorated wicker baskets lined with embroidered cloth and filled with intricately painted eggs, cheese and paska – traditional Ukrainian Easter bread.

But celebrations were also tinged with sadness about the ongoing conflict in Ukraine.

In his Easter message, Bishop Mykola Bychok, the head of the Ukrainian Catholic Church in Australia, New Zealand and Oceania, said the community was going through the “most difficult period in the recent history of Ukraine and the church” as war ravages the eastern European country.

“Although we are far from Ukraine in Australia, we are close to it in heart and mind. We are all worried about the war and we are doing those things which lie within our power to undertake for the benefit of our poor brethren in Ukraine. In this time of trial, today we need to witness the resurrection of Christ more than ever.” 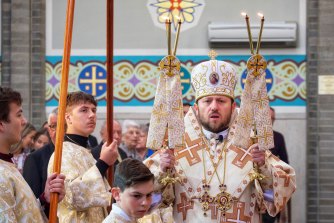 Among those who attended a Melbourne service were Stefan and Halyna Nykyforuk, who arrived in Victoria just two weeks ago from Ukraine.

Their son remains there fighting, which has been difficult and stressful for them. Just before the Ukrainian government banned all males between 18 and 60 from leaving the country, the couple fled to Poland, where they lived for weeks in a two-bedroom apartment housing 21 people.

Now, they are living with a relative in Bendigo, in central Victoria, and will start fruit picking jobs on Monday.

Through a translator, Halyna said they were happy to be in Australia and “felt very much at home”. They were grateful to be able to pray for peace in Ukraine in a church, and said they were heartbroken about the number of young people who were dying in their home country. 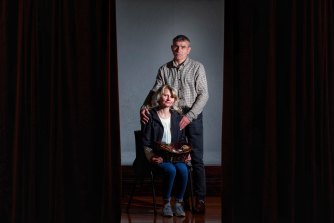 Stefan and Halyna Nykyforuk arrived in Victoria two weeks ago after fleeing the Ukraine. Their son remains there fighting. Credit:Luis Enrique Ascui

They will now begin trying to build new lives, as will Svitlana Solovey and her family, who left Ukraine with one backpack and the clothes they were wearing.

Sunday was a day to enjoy the “big church family”, whom she said had been incredibly welcoming from the moment they arrived.

“They treat us like their own, they help us a lot. We are very grateful,” she said.

“We were lucky the Australian government is so supportive of Ukraine and we are here, we have flown, we are safe.”