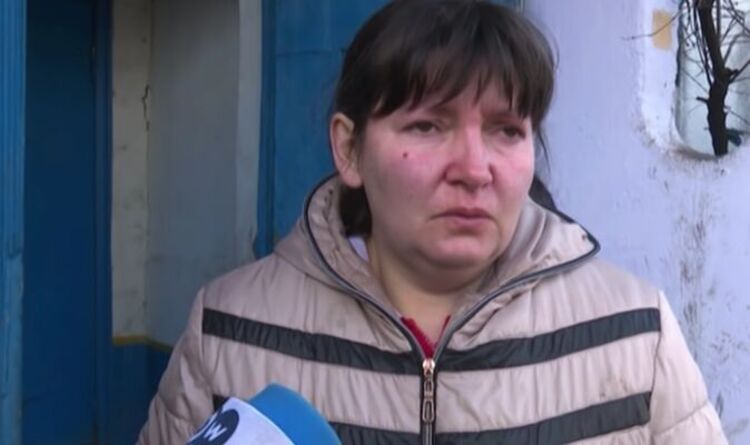 Ukrainian resident in tears as town torn apart by shelling

A Ukrainian woman living near the frontline with Russian-backed separatists has broken down in tears while recalling the pain of seeing her town village apart by shelling. Lina Makarenko spoke with DW News amid ongoing clashes between the Ukrainian government forces and pro-Russia fighters from Donetsk and Luhansk in the east of Ukraine.

“I do not yet understand okay.

DW News reporter Mathias Bolinger noted: “There are 15 kilometres between here and the frontline, which is just the range of this artillery that they are using.

JUST IN: Do you think UK should send troops into Ukraine if Russia invades?

“People have not experienced this kind of fighting even during the worst times.

“Lina Makarenko and her neighbours have tried to make the most out of the cold and damp cellar, but the effect of the electric heater is limited she’s in and out of the basement constantly those days.”

He added: “It takes just a few minutes and the shelling begins again.”

Vladimir Putin has announced that Russia recognises the pro-Russian “republics” of Donetsk and Luhansk in eastern Ukraine.

On Tuesday, Mr Putin said the only way to resolve the crisis is for the government in Kiev to give up its ambitions to join Nato and to accept the “demilitarisation” of Ukraine.

The Russian leader added that he was confident the Russian people would support his decision.

Russian state television showed Mr Putin, joined by Russia-backed separatist leaders, signing a decree recognising the independence of the two Ukrainian breakaway regions along with agreements on cooperation and friendship.

The Russian leader said on Monday he was authorising the despatch of “peacekeepers” to the area.

Russia is currently estimated to have around 150,000 troops massed on the borders around Ukraine, with warplanes and troop carriers continuing to deploy near the frontline.

The US, the European Union and the UK announced new sanctions on Russia on Tuesday after Moscow’s recognition of the two separatist regions.

The UK has already sent anti-tank weapons to the Ukrainian military to help counter the threat posed by Russian forces ringed around the country’s borders.