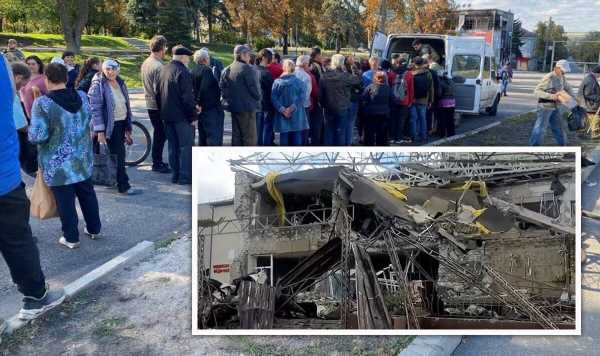 Ukrainians were found “starving” in the eastern city of Izyum after Russian occupiers fled the last month, according to a volunteer worker on the ground. Sergii Mokriev helped to deliver food and supplies to the affected areas. He spoke exclusively to Express.co.uk about the conditions faced by the people of Kharkiv Oblast.

The key strategic city of Izyum – which had a pre-war population of 45,884 – was captured by Russian forces in April and used by Moscow as a supply hub. It was recaptured by Ukrainian forces last month. The Kremlin’s forces left behind horrors, including nearly 500 bodies found in mass graves around the city.

Many of the people in the city were starving, according to Mr Mokriev. He claimed that Russian soldiers “ate everything” and added “they are like pests”.

He added: “They are like real orcs from the Tolkien books, they just leave razed ground after them.”

People rushed to the vehicles bringing supplies, including food, according to Mr Mokriev, director of the charity fund Sigma Software Social Initiative. He said: “People were just storming cars [saying] ‘give us at least something, a piece of bread’ people are famished there.”

Although some lucky few people had stocks of food, many were afraid to leave shelters in there basements to retrieve it, according to Mr Mokriev. This went on for months.

His organisation continues to follow the frontlines, bringing supplies to his countrymen in liberated towns. However, it is a dangerous job.

Mr Mokriev said that landmines and munitions left behind by the Russian soldiers pose a danger to those volunteering. Some had been killed by the devices.

He said: “[Recently], there were seven volunteers who died, they hit mines. There was another story where an ambulance hit a mine and exploded – the driver died, the rest are in intensive care.”

Mr Mokriev said the surrounding towns and villages were in a similar state to Izyum.

The scenes in Karkiv Oblast are reminiscent of atrocities committed in Bucha in the earlier days of the war. As Russian forces retreated from the settlements outside Kyiv, they left carnage and destruction in their wake.

In Kharkiv Oblast, Ukraine’s soldiers and volunteers are finding similar atrocities. Some officials have said the situation may even be worse.

The incredible Ukrainian counteroffensive which led to the recapture of the territory continues, albeit at a slower pace. Volodymyr Zelensky’s forces appear to have momentum and are reclaiming territory in the south, as well as the northeast

There are fears in Moscow that Putin is being backed into a corner. His forces are losing on the battlefield and popularity at home is suffering due to mass mobilisation which has seen hundreds of thousands of Russians sent to war.

Following an apparent truck bomb attack on the Kerch bridge linking the Crimean peninsula with the Russian mainland, Putin has this month launched a massive missile attack on Ukrainian cities.

These missiles appeared to target civilian infrastructure and busy areas. As the war continues – and Russian forces become more desperate – attacks and atrocities committed on civilians could continue or even increase.