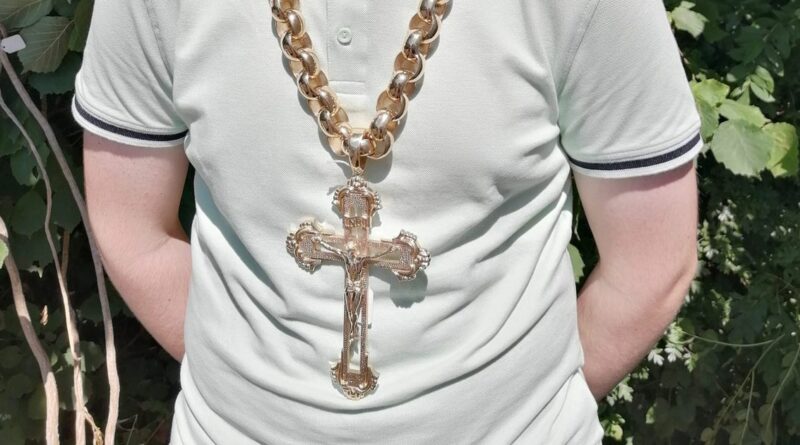 A monster gold cross pendant a bloke bought in Birmingham’s Jewellery Quarter because ”it reminded him of his nan” has failed to sell at auction despite a £25,000 pledge from boxing hero Tyson Fury.

Andreo Montanino, 33, bought the huge piece of jewellery described as “Britain’s biggest gold cross” because his gran had been a devout Roman Catholic.

He explained: “My nan would have hated that [the jewellery be melted down]. She was highly religious, a Roman Catholic who originated from Italy."

READ MORE: Tyson Fury offers to buy 'UK's biggest gold cross and chain' to save it from scrap heap

"She believed items like this, Jesus on the cross, were sacred and should be treated with the utmost respect.

“As soon as I saw that cross, it reminded me of her. I had to buy it for nan. I had to save it from being melted down."

But he later decided to sell it, saying: "I hope bringing it to auction will help me find someone who will treasure it. Because it’s so special, a showpiece, it would work well if it was worn around the neck of a famous boxer on the walkout to the ring, someone like Tyson Fury or Anthony Joshua.

"It would be interesting to know who commissioned the cross originally. No one I have shown it to has ever seen anything like it before. I think it could be the biggest necklace of its kind in the UK."

The item, over eight inches in length, went up for auction last week, with Hansons Auctioneer’s estimating its value at £30,000.

Tyson Fury had already expressed an interest in the half-pound pendant, telling his Instagram followers in August: “Don’t know who owns this but seen it online i will give £25k for it.”

But the cross and chain failed to meet its reserve price, and Andreo’s quest for a “sportsman or celebrity” who will treasure it continues.