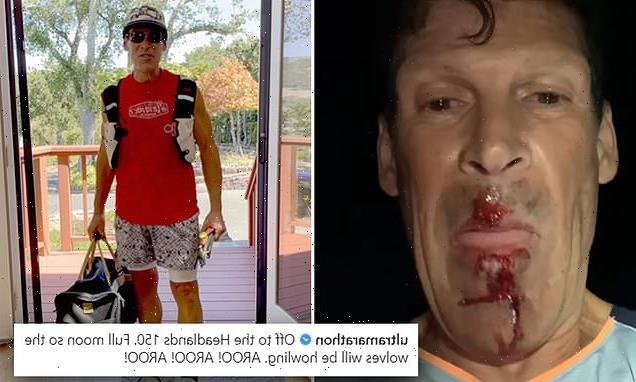 Bloodied ‘super-human’ ultramarathon runner shares moment right after he was savagely attacked by a coyote on a 150-mile run: ‘I guess I got to keep going or else it will probably come back for me’

An ultramarathon runner was ambushed by a coyote during his 150-mile run in California near the Golden Gate Bridge.

Dean Karnazes, 59, posted a video to Instagram and discussed the attack to his over 100,000 followers with blood dripping from his upper and lower lip.

The caption to the video reads: ‘I’ve been attacked by a shark, and now a coyote.’

Alone at 3am and at the 37-mile mark, Karnazes said he had ‘something rather terrifying happen.’

‘I was running and I heard some footsteps behind me,’ he said. ‘I thought it was a big dog on the trail and I turned to look and it was a coyote.’ 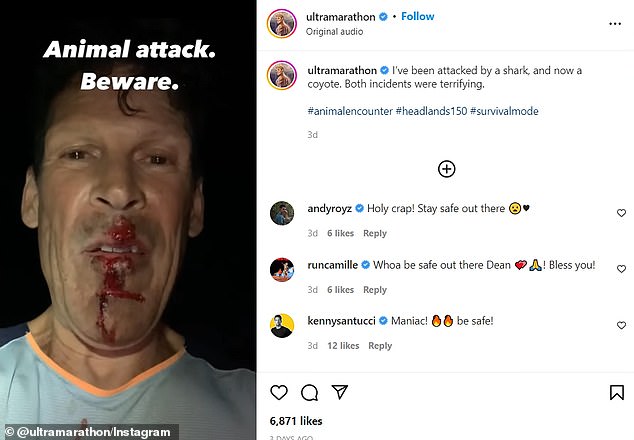 Dean Karnazes (left), 59, took to Instagram to document being attacked by a coyote on his 150-mile run 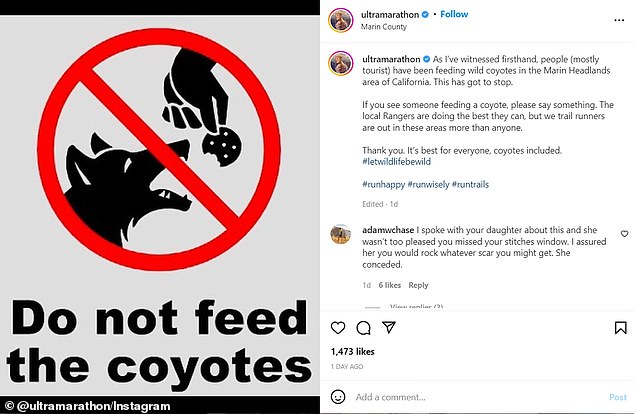 Following the incident, Karnazes responded to his own post and told his viewers ‘if you see someone feeding a coyote, please say something.’ He says he believes he was attacked for his energy bar 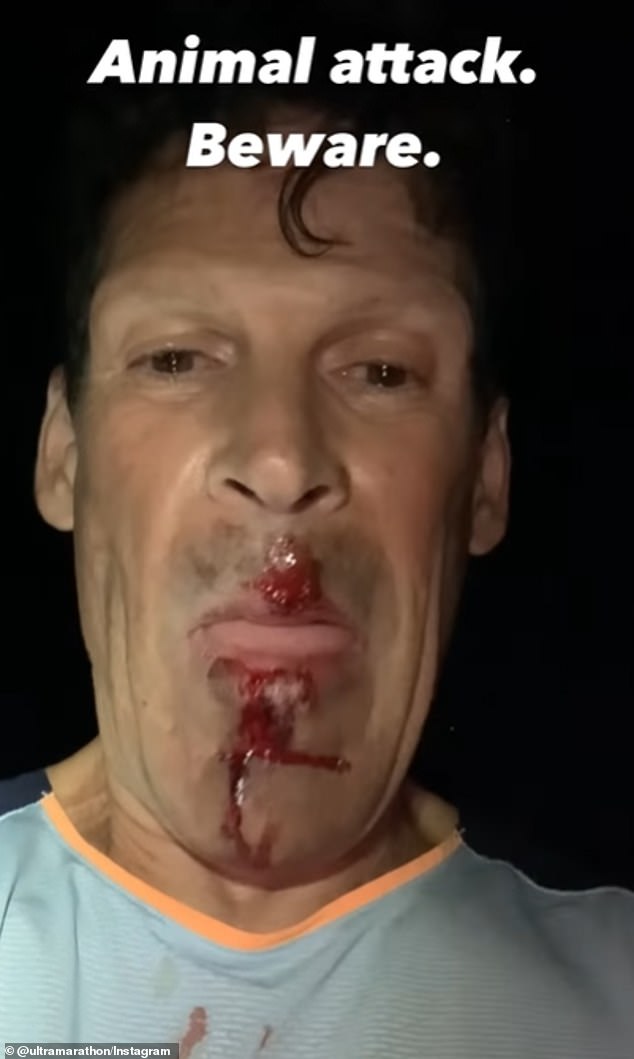 ‘I just had something rather terrifying happened,’ he said. Karnazes was alone at the 37-mile mark, located close by to the Golden Gate Bridge 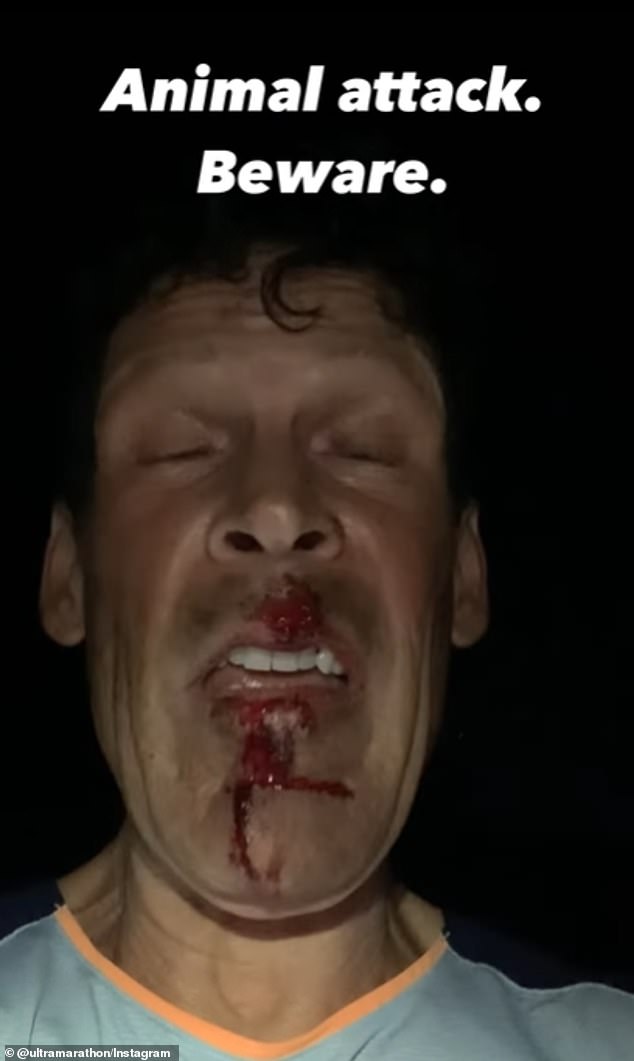 After grabbing hold of the trekking poles he brought with him for support, he was able to fend off the coyote 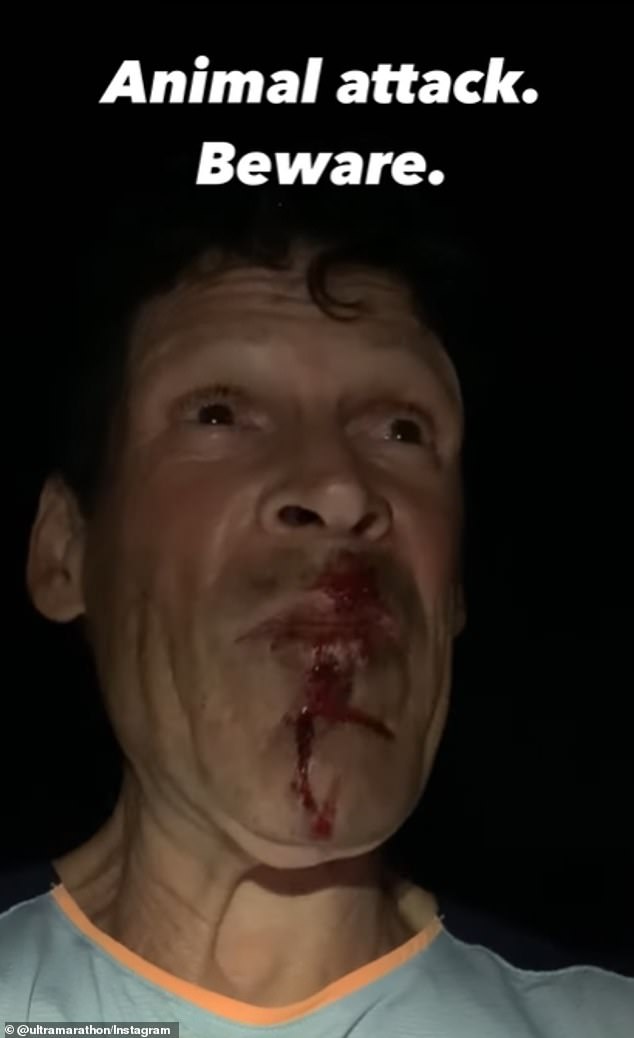 After fending off the animal, he continued to run. ‘Not sure what I’m going to do, but I guess I got to keep going or else it will probably come back to me’

After being knocked to the ground, Karnazes believes the animal was going after the energy bar he was preparing to eat, he told NBC.

‘Honestly, I think it didn’t know what to do,’ he added.

After grabbing hold of the poles he brought with him for support, he was able to fend off the coyote. He then continued to run.

‘Not sure what I’m going to do, but I guess I got to keep going or else it will probably come back to me,’ he concluded.

Known for his long-distance efforts, Karnazes is best known for his running of 50 marathons in 50 consecutive days in 50 different states.

Named one of TIME Magazine’s 100 Most Influential People in the World in 2007, Karnazes has also run across Death Valley in Eastern California’s Mojave Desert and a marathon to the South Pole in below-zero temperatures.

The 150-mile trek was not foreign to Karnazes, who has recorded 10 separate 200-mile races.

He attributes his ability to do these runs because of his body’s ability to rapidly flush lactic acid from his system.

Typically, as we exercise, the body converts glucose to energy, which produces lactic acid as a byproduct. As that builds up in the muscles, it begins causing cramps and fatigue as a signal to stop.

Karnazes never receives those signals. As a result, he is able to keep on running without stopping and competes in some of the toughest endurance races in the world.

‘At a certain level of intensity, I do feel like I can go a long way without tiring,’ he told the Guardian previously.

‘No matter how hard I push, my muscles never seize up. That’s kind of a nice thing if I plan to run a long way.’ 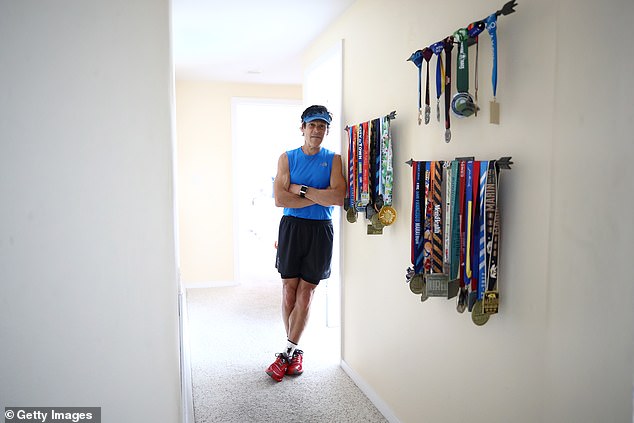 ‘No matter how hard I push, my muscles never seize up,’ Karnazes said of his running abilities. ‘That’s kind of a nice thing if I plan to run a long way’