A veteran police officer could lose his job or face other penalties because of online comments he made allegedly criticising Victoria Police’s campaign to promote workplace equality for LGBTIQ members.

The disciplinary action taken against Sergeant Bruno Staffieri has polarised many in the force and shapes as a test case for freedom of speech, particularly for officers expressing religious or political opinions online. 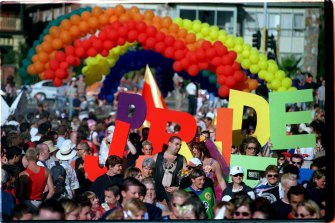 Police support for the St Kilda Gay Pride March was one of the matters discussed online by the sergeant.Credit:Jerry Galea

Sergeant Staffieri, who has been an officer for more than 35 years, was charged with a disciplinary breach in December last year following an investigation by Professional Standards Command, according to a letter from Assistant Commissioner Tess Walsh.

The internal correspondence obtained by The Age refers to several posts made by Sergeant Staffieri on LinkedIn and the force’s internal communication platform, known as Yammer, including one comment that raised the ire of Deputy Commissioner Neil Paterson.

On June 21 last year, Mr Paterson posted on Yammer that “Victoria Police is proud to have been recognised as a silver employer at the 2021 Australian LGBTQ+ inclusion awards.”

Sergeant Staffieri responded on June 23 by posting: “Yes I agree. Great achievement. But if the public knew how much time, effort and taxpayer dollars went into this, they would also be demanding why we didn’t get a gold.”

Mr Paterson defended the campaign and said it had not received significant public funding.

“I don’t respect or value your views as they are offensive and there is no place for those views in Victoria Police…. Either limit your comments on Yammer to comments that are respectful of everyone or consider your employment options,” Mr Paterson posted. 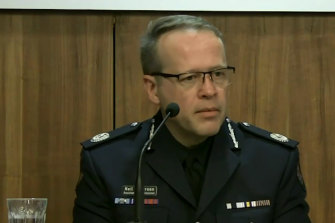 Sergeant Staffieri was also investigated over his public criticism of the government’s decision to cancel Australia Day and Anzac Day celebrations last year, but allow the Gay Pride March in St Kilda to proceed.

“So the next time Australians are sent out to fight a war, maybe we can send out the 8000 that marched today….and try to stop the enemy by waving feathers and brightly coloured boas at them. I’m sure that will stop any invading army in its tracks,” Sergeant Staffieri posted on May 17, 2021.

“I don’t think you speak for all of Victoria Police. I, for one, certainly don’t support this nor the groups that keep pushing their personal agendas. I can’t see why we continue to throw taxpayer money at this sort of un-Christian activity,” Sergeant Staffieri posted on his personal LinkedIn account.

Sergeant Staffieri, who is based with the Transit Safety Division and is also a platoon sergeant with the Army Reserve, was interviewed by detectives from Professional Standards Command in September last year, then notified of the disciplinary charge in December.

The 62-year-old officer was told his comments reflected an “adverse view of the LGBQTQ+ community” and were in breach of the force’s professional and ethical standards, according to correspondence from Assistant Commissioner Walsh on December 3.

However, many of Sergeant Staffieri’s colleagues have defended his right to express opinions on the force’s internal communication platform.

A senior officer from eastern region not authorised to speak publicly said Sergeant Staffieri was being punished for standing up to Mr Paterson and force command.

“He spoke out of turn, and now they want to make an example of him (Sergeant Staffieri). He’s entitled to his opinion, [he] asked a few questions that are entirely legitimate in my opinion. A lot of coppers are keeping a close eye on this hearing and will not be happy if he gets walked,” the officer said.

Victoria Police and Police Association Victoria declined to comment, while Sergeant Staffieri did not respond to requests from The Age.

Sergeant Staffieri is due to face a disciplinary hearing in March. He faces a range of possible sanctions, including dismissal, demotion, loss of remuneration or a reprimand.