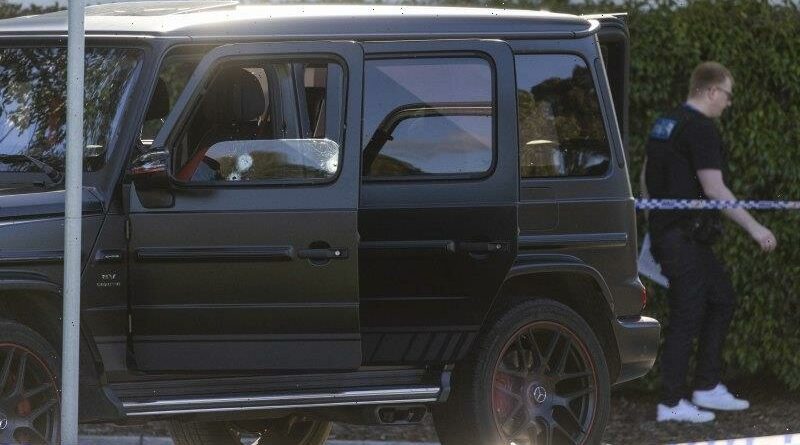 A gangland shooting outside a cemetery, the victim’s four-wheel-drive riddled with bullet holes; masked gunmen crashing their getaway car into a fire hydrant, then escaping after carjacking an innocent passer-by, traumatising a mother and her child.

The events around Fawkner cemetery last Saturday sounded more like something out of an outlandish Hollywood action movie than a wintry weekend afternoon in Melbourne’s northern suburbs. 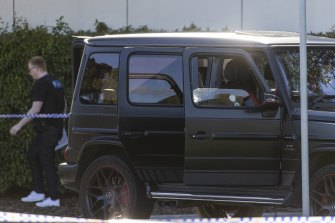 The black Mercedes outside Fawkner police station with three bullet holes in the driver’s side window. Suleiman “Sam” Abdulrahim was injured in the attack.Credit:Paul Jeffers

But for many the failed assassination of former bikie Sam Abdulrahim brought back memories of a time when Melbourne was notorious for its seemingly relentless spate of brutal gangland killings.

Melbourne’s gangland wars of the early noughties ground on unabated until the protagonists had just about all killed each other or ended up in prison (or both, as in Carl Williams’ case).

God forbid we return to the days where there was more than enough fodder to fuel a long-running TV series, making the criminals into household names. Yet the signs are not good: just last month, apparently unrelated to the Fawkner incident, homes in Epping and Pascoe Vale were sprayed with bullets in drive-by shootings.

The announcement on Friday, then, of a new police taskforce charged with deterring and disrupting organised crime is to be welcomed. It will target criminal groups through, among other measures, firearm prohibition orders, bail compliance checks, vehicle checks and policing motorcycle runs and other events frequented by outlaw gang members.

We have high hopes for Chief Commissioner Shane Patton’s promise of “immediate results when it comes to community safety”. The taskforce even has a neatly workshopped acronym, VIPER, standing for “visibility, intelligence, prevention, enforcement and reassurance”.

It is concerning, however, if gang violence is now clearly such a problem in Victoria that it requires 80 specialist officers to be taken away from their presumably necessary current jobs in an attempt to tackle it.

It is also as yet unclear how the new unit will improve on the efforts of the existing Armed Crime Squad and the Echo taskforce, though the chief commissioner has denied there is any cross-purpose, saying Viper officers differed by offering a more mobile workforce, allowing police to be deployed anywhere in the state at short notice.

As for the apposite timing of the announcement, barely a week after the latest shooting, one has to question whether the prime motive here is not to actually do something, but to be seen to be doing something – the “visibility” and “reassurance” parts of Viper, perhaps?

Indeed, there is a growing argument that the best deterrent to this growing scourge is not more Band-Aid policing, even with the best intentions, but legislative change to bring Victoria into line with other states that have cracked down more harshly on gang violence.

During the mid-2010s states and territories across Australia enacted numerous anti-association laws in an attempt to restrict organised motorcycle gang members displaying patches – “colours” – and conspiring in public.

As David Estcourt reported this week, Victoria went down the same path but stopped short, introducing anti-criminal association laws in 2016 that were unenforceable if criminals were associating with family members, seeking legal advice, or involved in religious, study or work interests. So wide were the loopholes it’s not surprising no one has been prosecuted.

And while police point to the proliferation in firearm restriction orders – bringing harsh penalties to those subsequently found harbouring a gun – there may have been unintended consequences, with crime reporter John Silvester suggesting veteran criminals have instead recruited newbies to do their dirty work for them, if ineptly.

A broader approach may now be necessary. Former Gold Coast superintendent Jim Keogh and former Victoria Police chief commissioner Kel Glare are among those calling for a united front between all states and territories to discourage gang members from migrating into more lax jurisdictions. Even wearing bikie gang colours, for example, is a crime in some other states.

Federal legislation would be neatest. But in its absence, the Andrews government should revisit our own anti-association laws, and quickly, to make Victoria less attractive, or at least less navigable, to these antisocial elements.