After the University of Florida's student body president helped bring Donald Trump jnr and Trump campaign adviser Kimberly Guilfoyle to campus last month to the tune of $US50,000 ($72,500), the university's student government has now moved to impeach him, arguing that the speaking engagement amounted to a misuse of student fees.

The student body president, Michael Murphy, was served with the impeachment resolution on Tuesday and accused of malfeasance and abuse of power – a development unfolding at the university just as President Donald Trump's public impeachment hearings begin on Capitol Hill. 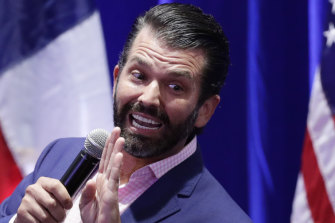 For Trump, the key piece of evidence is his July phone call with the Ukrainian President. For Murphy it's an email, a short exchange with a Trump campaign consultant that his critics say is proof of misconduct.

The group of senators seeking Murphy's impeachment argue that the October 10 speaking engagement for Trump jnr and Guilfoyle, his girlfriend, was funded with mandatory student fees in violation of rules banning the use of public students funds to support or oppose a "political party at any level." In the eyes of critics, Murphy's correspondence with the Trump fundraising consultant ahead of the event bolsters their case that Trump jnr and Guilfoyle's appearance was a campaign event.

"By using student fees to advance his own expressed political beliefs at the expense of the … Student Government writ large, Mr Murphy not only endangered students marginalised by the speakers' white nationalist supporters, but also abused his power to advance a particular political party at the expense of the students he should represent," the impeachment resolution states.

Murphy could not be reached for comment late on Tuesday, but he has previously maintained in comments to the student newspaper, the Independent Florida Alligator, that the couple's speech was not a campaign event and therefore didn't violate any rules. 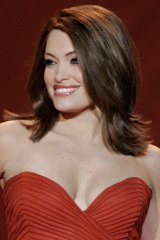 In recent weeks, the couple has travelled around the country for numerous speaking engagements, a mixture of campaign events such as a "Keep America Great" panel in San Antonio, and promotional events such as for Trump jnr' s new book, Triggered: How the Left Thrives on Hate and Wants to Silence Us. Speaking about the book at the University of California at Los Angeles on Sunday, far-right agitators heckled Trump jnr.

But in Florida, the couple taunted the liberal protesters, with Guilfoyle telling them at one point, "I bet your parents are so proud of you," to cheers from the pro-Trump crowd.

At one point, Guilfoyle said Trump was doing "so much for our country," adding, "He has the balls to stand up for what's right," unlike other politicians who fall victim to a "little mini DustBuster, like, testicular vacuum," the Times reported. Trump jnr said of his father's efforts to improve the economy: "There is not a single economic metric where we are not better off today than you were three years ago," the Times reported.

Such comments, critics said, showed that Trump and Guilfoyle were actively campaigning for the President.

"These are well-known campaign surrogates travelling the country for a political candidate," Bobby Mermer, co-president of Graduate Assistants United at UF, told The Post in October. He added: "We would be opposed to the ACCENT bureau using student fees to fund any candidates – Joe Biden, Elizabeth Warren, Bernie Sanders, it doesn't matter. Have the campaigns or private funds pay for it, not mandatory student fees."

The effort to impeach Murphy picked up steam on October 30 after the student newspaper published emails between him and a Trump Victory reelection campaign official, shedding light on how Trump jnr's speaking engagement came about.

In the brief September email exchange, Caroline Wren, national finance consultant for Trump Victory, reached out to Murphy saying she would like to bring Trump jnr, Guilfoyle and Republican National Campaign Co-Chairman Tommy Hicks to the university. She recalled that she and Murphy met at her house on July 4. At that time, Murphy mentioned that he'd like to bring Trump jnr to campus, as he told the Alligator.

Murphy – already seen on campus as well connected because his father is a Republican lobbyist and has donated to Trump – responded to Wren's email saying he would "love to hop on a phone call" to get the event rolling.

In a statement, Wren told The Post that she was reaching out in her personal capacity on her private email – linked to her company, Bluebonnet Fundraising – and "mistakenly forgot to remove my Trump Victory signature."

"After an initial call to discuss a potential visit, University of Florida representatives were connected to Donald Trump jnr's office," she said in the statement.

Murphy and Fair have previously disputed any claims that organising the speaking event for the conservative power couple amounted to political bias, pointing to the fact that they also tried to bring Democratic presidential candidate Bernie Sanders to campus this autumn.

The Alligator unearthed emails showing that Sanders's non-campaign staff declined Murphy's speaking invitation on September 22, saying he was too busy. Sanders' representatives asked if the presidential candidate could come to campus as part of a campaign event, but Murphy said no. He stressed that Trump jnr's appearance was on the agreement that it would not be a campaign speech.

"The only difference was Senator Sanders' non-campaign staff declined our invitation to speak in his official capacity," Murphy wrote in an email to the Alligator. "Any attempt to try and separate one from the other with allegations of impropriety is deceptive and inflammatory."

According to the student government constitution, a group of senators tasked with weighing impeachment must vote for Murphy's ouster by two-thirds majority. If that occurs, he will be temporarily suspended as the case moves to a senate trial body, which must vote by three-fourths majority to convict and remove him from office.

Some conservative students voiced scepticism about the impeachment effort and defended Murphy's actions. When the student senate broached the possibility of impeachment during a hearing last week, one student, Jared Rossi, said the impeachment was based on partisanship and that senators were misleadingly "stuffing Ms Wren's words into Michael Murphy's mouth," the Alligator reported.

Jarrod Rodriguez, treasurer of UF's College Republicans group, told the Times that he did not believe the emails between Wren and Murphy provided evidence of an impeachable offence.

"I'm not saying that it doesn't raise any eyebrows," he said, "but it also isn't the nail in the coffin."