The US Air Force flew bombers in a training mission over the South China Sea where the Chinese government has built build man-made islands, some of which are equipped with military facilities.

The islands are known as the Spratly Islands, which are a disputed territory. China has claimed them as their own, however their neighbors and the US does not recognize its claim.

The pair of US Air Force B-52 Stratofortress bombers’ training exercise is part of what the US Air Force’s program known as the ‘Continuous Bomber Presence’ in the region, according to CNN. 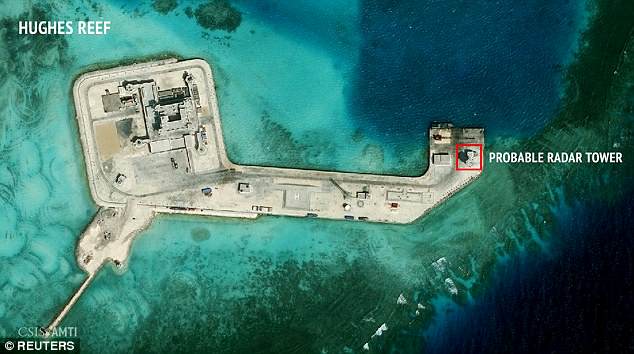 The bombers took off from Anderson Air Force Base on the island of Guam.

‘Continuous Bomber Presence (CBP) missions are intended to maintain the readiness of U.S. forces,’ the Pacific Air Forces statement said, according to The Hill. ‘The U.S. Pacific Command’s CBP missions, which have been routinely employed since March 2004, are in accordance with international law.’

While the US does not typically get involved in territorial disputes, this particularly heavily trafficked waterway must remain open and unmilitarized.

The bombers took off from Andersen Air Force Base on the island of Guam according to a statement from US Pacific Air Forces, which oversees air operations in the region. The flight also involved additional training with F-15 Strike Eagle jets in the vicinity of Okinawa, Japan. The training mission was part of the US Air Force’s routine ‘Continuous Bomber Presence’ in the region.

Concerns over China’s apparent attempt to control the South China Sea were expressed this month, when  US military’s Pacific Command, Adm. Phillip Davidson told Congress that the country was using the islands for military purposes. ‘China has long claimed the South China Sea as their own,’ he said. ‘It is my belief that they intend to establish the military structure that will help them control the air and sea lanes through that region of the world.’

Speaking at the same Armed Services Committee hearing, Republican Sen. James Inhofe said China is ‘creating islands out there, all of them being singularly for military purposes.’

‘We know they have runways, they have cannons, they have – everything in there is military. And it’s really pretty scary,’ Inhofe added.