New York: A US congressman has resigned after deciding to plead guilty to insider trading charges related to an Australian biotechnology firm.

Chris Collins, a Republican congressman from New York, was a major investor in the tiny, Sydney-based firm Innate Immunotherapeutics and sat on the company's board. 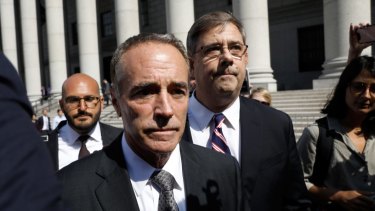 US congressman Christopher Collins has resigned over his involvement in alleged insider trading at Australian firm Innate Immunotherapeutics.Credit:PETER FOLEY

Prosecutors in Manhattan allege that Collins encouraged his family members to sell shares in the company after he discovered clinical trials for a promising multiple sclerosis drug had bombed.

The information had not yet been released to the public, triggering insider trading charges.

Collins was the first Republican in the US Congress to endorse Donald Trump in the 2016 election campaign and represents a conservative district in upstate New York.

He narrowly held on to his seat at last year's midterm elections despite being under indictment.

Collins initially pleaded not guilty to the charges, and his lawyers said he would be "completely vindicated and exonerated".

But he is expected to change that to a guilty plea in an appearance before a Manhattan court on Tuesday local time (Wednesday AEDT).

He wrote to House Speaker Nancy Pelosi on Monday local time to inform her that he was resigning his congressional seat. 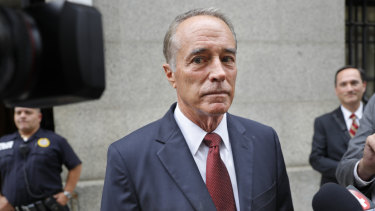 US Representative Chris Collins speaks to reporters as he leaves the courthouse after a pretrial hearing in his insider-trading case in New York in September.Credit:AP

Innate Immunotherapeutics has offices in Darling Harbour in Sydney and in Auckland.

Collins was at a congressional picnic at the White House in June 2017 when Innate's chief executive sent an email to directors reporting that the trial of a multiple sclerosis drug known as MIS416 had failed.

Collins replied: "Wow. Makes no sense. How are these results even possible???"

He then made a flurry of calls to reach his son Cameron, who promptly offloaded his shares in the company as did other family members and associates.

Collins did not sell off his own shares in the firm.

"Congressman Collins had an obligation, a legal duty to keep that information secret until that information was released by the company to the public," US Attorney for the Southern District of New York, Geoffrey Berman, said last year.

"But he didn't keep it secret. Instead, as alleged, he decided to commit a crime. He placed his family and his friends above the public good."

In a statement last year when the indictment against Collins was released Innate Immunotherapeutics said the company and its directors were not under investigation.

"The Company considers the ongoing investigation to be a private matter to Mr. Collins," the statement said.