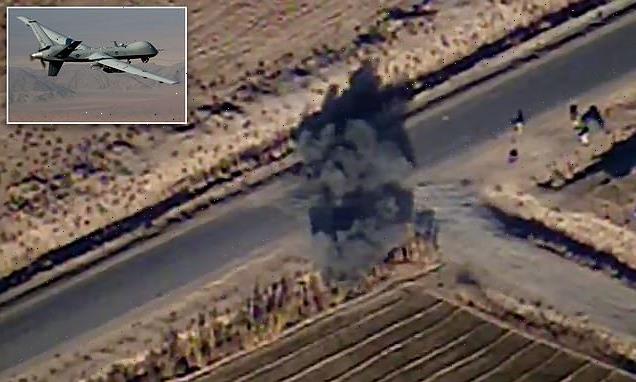 A U.S. drone pilot working in Afghanistan mistakenly killed two Afghan civilians and a child, he has admitted,  as he questioned the tactics used amid America’s ongoing withdrawal.

The pilot was working in Helmand province in 2019, he told the website Connecting Vets. It also shared leaked footage of drone strikes from multiple pilots interviewed, although images of the attack that killed the child were not included.

He and other drone operators told the site of their dismay at the work with Task Force South West, saying they felt their drone strikes served little purpose when the Marines had essentially given up on Helmand.

‘The drone strikes were punitive. Killing for the sake of killing,’ one of the operators said.

‘It’s nihilistic, there is no point,’ said a second source, one of the drone operators.

‘It was clear that we were not making a difference.’ 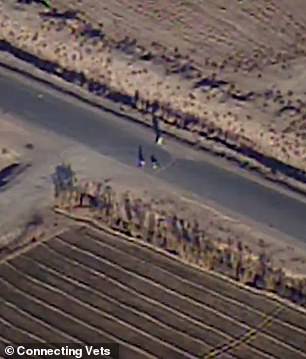 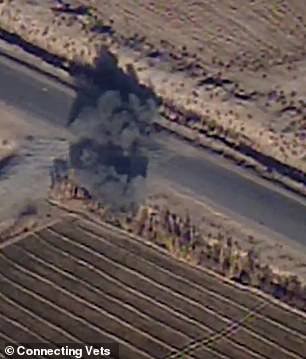 Drone operators told the website Connecting Vets that they felt the 2019 drone attack campaign in Helmand province, Afghanistan, was futile. Leaked footage of one such attack is pictured above 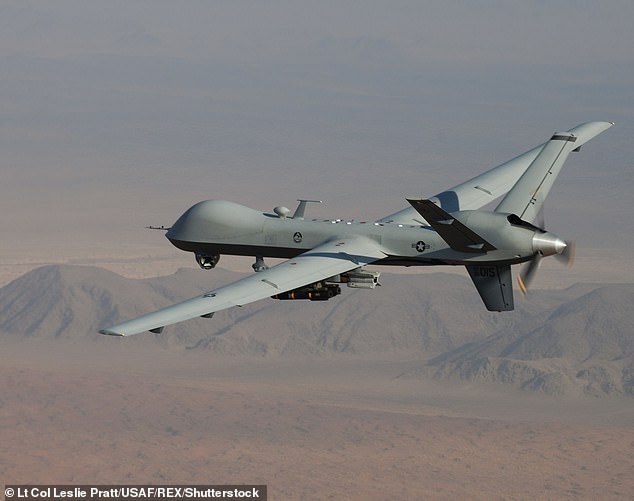 The killing of the young family was particularly traumatic for the operator.

‘My productivity today was derailed,’ the drone operator wrote in his journal, obtained by the site.

‘We killed two innocent men and a charger.’

A charger is military slang for a child.

The operator said that they were trying to kill an Afghan man on a motorbike who had been using a two-way radio – something which was common in Helmand, after the cell phone towers were taken out, and something which was also, in U.S. military eyes, reasonable grounds for suspicion.

‘We were trying to kill a guy with a radio I’d found earlier in the day,’ the operator wrote.

‘He rode right through the blast and kept going. I watched a passerby load the bodies into a truck and drive them to a hospital. They are all dead.’ 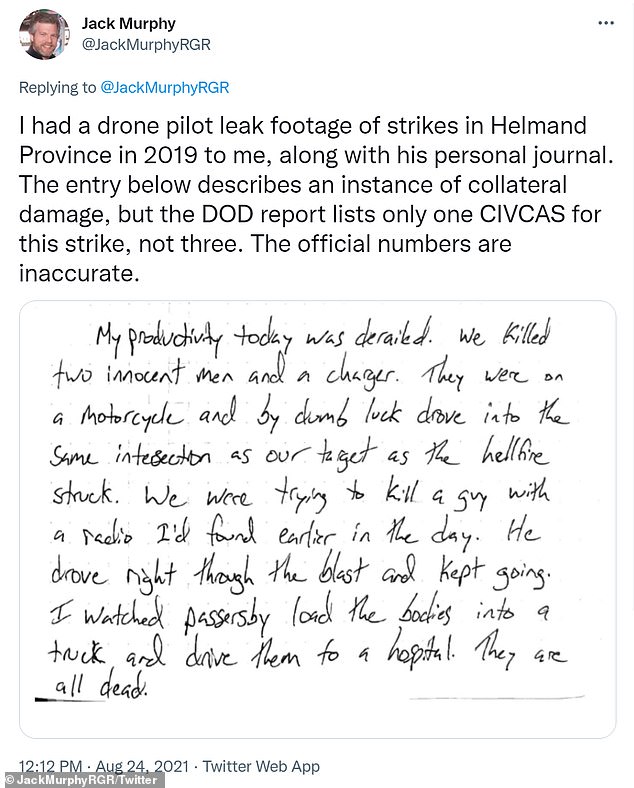 One of the drone pilots described a scene from 2019, in which he spotted an Afghan man under a tree speaking into a radio. As the man was walking towards his home, a Hellfire missile struck him.

‘An old lady comes running out of the compound. She comes down on her hands and knees next to this dude and you can see the despair, she is pounding on the ground, hitting herself,’ he said.

‘She was on her knees next to this guy with balled fists out at the sky, shaking her fists at me.’ 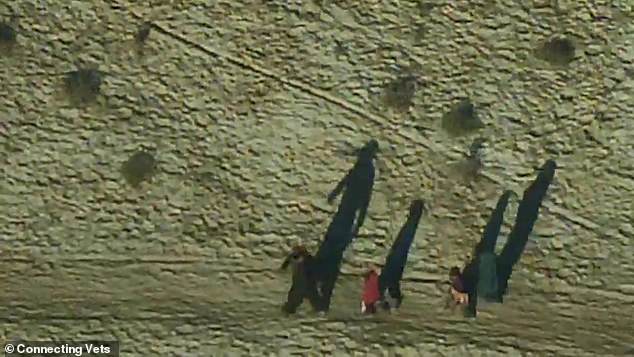 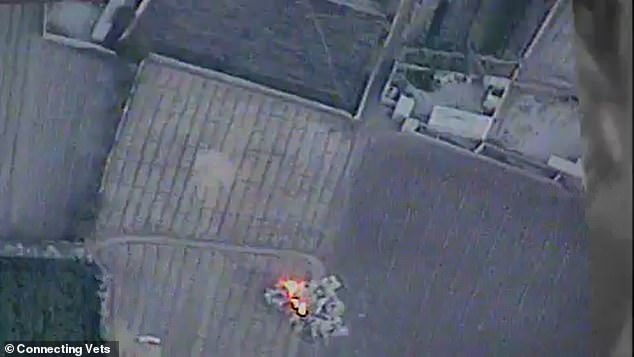 Another clip showed a strike on a road, with the target erupting in a ball of fire 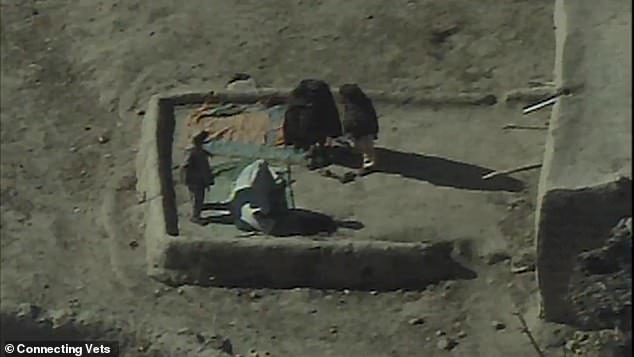 Barack Obama presided over an intense drone program, with 542 strikes killing an estimated 3,797 people, including 324 civilians.

He was strongly criticized for expanding an extrajudicial policy that he inherited from his Republican predecessor, George W Bush.

‘Obama sought to signal policy constraint, regulation, and layers of internal executive branch oversight for his killing rules; Trump explicitly signaled that the gloves were off to ‘further U.S. national security interests,” according to an ACLU report.

Trump in May 2019 ended a rule requiring the reporting of all deaths from drone strikes. He also removed the requirement that the commanding general for Afghanistan approve the strike, and reduced it to field grade officers, normally at the task force or battalion level. 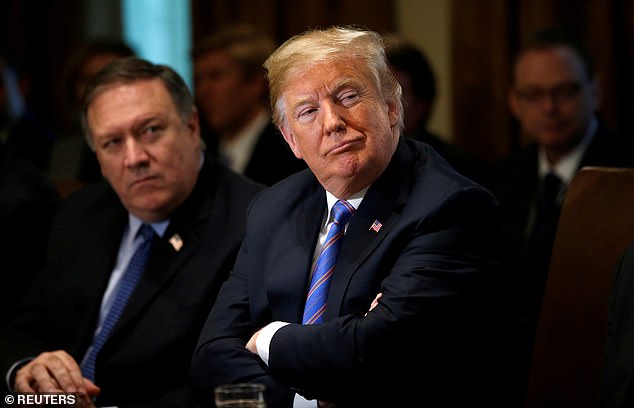 Donald Trump, seen in July 2018 with his Secretary of State, Mike Pompeo, made it easier to use drones 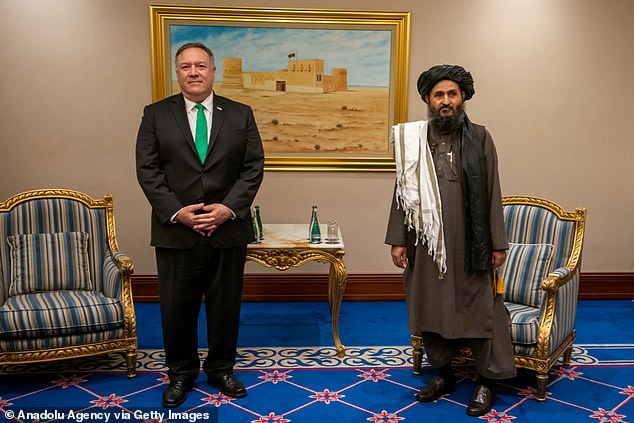 The move was seen, Connecting Vets say, as part of a process designed by the National Security Council, particularly by H.R. McMaster, to use a pressure campaign to force the Taliban to negotiate America’s exit from Afghanistan in Doha.

‘It became increasingly clear that the Afghan security forces were not going to be capable enough to operate independently in a counterinsurgency type campaign anytime soon and it’s arguable whether they would even ever get to that point on timelines that would be relevant.’

The second factor was the ‘Trump administration decision to set aside the precondition that had existed before of insisting that the Afghan government be involved in any negotiations with the Taliban, and accepting the Taliban’s condition for talks, which was that the U.S. would engage the Taliban directly,’ he said.

‘That shift in policy, and the subsequent direct engagement in negotiations with the Taliban, led to this idea that the U.S. needed to generate leverage in those talks.

‘Part of the way to do that or so that theory went was to increase military pressure on the Taliban.’

The intent was to speed up the pace of the strikes, in order to force the Taliban to the table in Doha.

One member of a drone team told the site that he left to go pick up his laundry during a lull in operations, saying he was absent for less than 15 minutes.

‘When I came back my buddy was like, ‘we killed a guy,’ he said.