All eyes on Georgia as counting continues

With an estimated 99 per cent of the vote counted in Georgia, Biden overtook Trump by more than 1000 votes late on Friday night AEDT, with thousands more ballots left to be counted.

That includes mailed ballots from population-dense counties in the Atlanta metropolitan region that lean Democratic. Biden is overperforming Hillary Clinton’s 2016 showing in those counties, including in their more upscale suburban reaches. 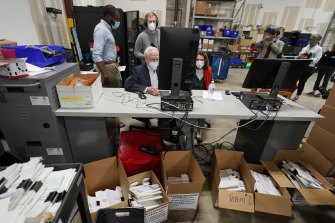 Georgia is a must-win state for Trump, who has a narrower path to victory than Biden. Trump prematurely declared he was winning in the state during his late-night White House press conference after election day.

Georgia has long been a Republican stronghold. Voters there haven’t swung for a Democratic presidential candidate since Bill Clinton in 1992, but the party’s grip has loosened.

In 2018, Democrat Stacey Abrams galvanised black voters in her bid to become the country’s first African American woman to lead a state, a campaign she narrowly lost.
Many political analysts say it's not a question of if, but rather when Georgia becomes a swing state.

Joe Biden's victories in the upper Midwest put him in a strong position in the White House race, but Donald Trump is showing no sign of giving up. He was back on Twitter about 2.30am on Friday, local time, insisting the "US Supreme Court should decide!"

Trump's erroneous claims about the integrity of the election challenged Republicans now faced with the choice of whether to break with the President who, though his grip on his office grew tenuous, commanded sky-high approval ratings from rank-and-file members of the Republican Party. 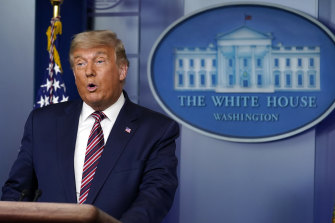 Maryland Republican Governor Larry Hogan, a potential 2024 presidential hopeful who has often criticised Trump, said unequivocally: "There is no defence for the President's comments tonight undermining our Democratic process. America is counting the votes, and we must respect the results as we always have before."

Trump's loyalists, including House Minority Leader Kevin McCarthy and senators Lindsey Graham and Ted Cruz, echoed Trump's evidence-free claims of widespread fraud in Pennsylvania and other swing states that have been trending toward former vice-president Joe Biden as more votes are counted.

Strong rebukes also flew in, mostly from regular Republican critics of Trump like Senator Mitt Romney and from Republican politicians who aren't returning to office.

"A sitting president undermining our political process & questioning the legality of the voices of countless Americans without evidence is not only dangerous & wrong, it undermines the very foundation this nation was built upon," Representative Will Hurd from Texas, who will retire when his term ends in January, tweeted. "Every American should have his or her vote counted."

Many others, including Senate Majority Leader Mitch McConnell, have stayed silent.

Biden eases ahead in Georgia as Trump attacks election process

Good morning and welcome to our continuing live coverage of the US election, a race that remains neck and neck between US President Donald Trump and Democrat Joe Biden.

Neither candidate has reached the 270 Electoral College votes needed to win the White House, but Biden has gained ground in tight contests in key battleground states – and a short time ago, he inched ahead in Georgia. 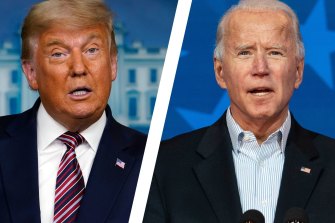 With his pathway to re-election appearing to shrink, Trump on Friday AEDT launched an extraordinary effort to sow doubt about the democratic process. From the podium of the White House briefing room, he advanced unsupported accusations of voter fraud to falsely argue that his rival was trying to seize power. He gave no evidence for his allegations.

In contrast, Biden urged the public to show a "little patience" as the vote counting in battleground states continued.

Stick with us and we'll bring you the latest numbers as they come in.