The Fulton County government said that 5000 ballots were still to be counted and it could be 10am, local time, before the process is complete.

President Donald Trump's campaign has put into action the legal strategy the President had signalled for weeks: attacking the integrity of the voting process in states where the result could mean his defeat.

Democrats scoffed at the legal challenges the President's campaign filed on Wednesday, US time, in Pennsylvania, Michigan and Georgia. In spite of the aggressive move, the flurry of court action did not seem obviously destined to impact the election's outcome. 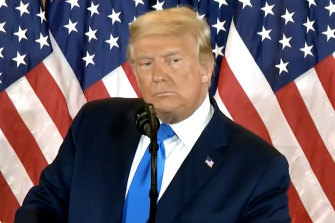 Donald Trump is launching a series of legal challenges over the election results.Credit:

The new filings, joining existing Republican legal challenges in Pennsylvania and Nevada, demand better access for campaign observers to locations where ballots are being processed and counted, and raised absentee ballot concerns, the campaign said.

The Associated Press called Michigan for Democrat Joe Biden on Wednesday, US time. The AP has not called Nevada, Pennsylvania or Georgia.

The Trump campaign is also seeking to intervene in a Pennsylvania case at the Supreme Court that deals with whether ballots received up to three days after the election can be counted, deputy campaign manager Justin Clark said.

In addition, Trump's campaign has said it would ask for a recount in Wisconsin, a state the AP called for Biden on Wednesday afternoon. Campaign manager Bill Stepien cited "irregularities in several Wisconsin counties," without providing specifics.

Biden said the count should continue in all states, adding: "No one's going to take our democracy away from us – not now, not ever."

Where we're at: The states still in play

The race is too early to call in Georgia because an estimated 4 per cent of the vote remains to be counted. That includes mailed ballots from population-dense counties in the Atlanta metro region that lean towards the Democrats.

Biden is overperforming Hillary Clinton's 2016 showing in those counties, including in their more upscale suburban reaches. 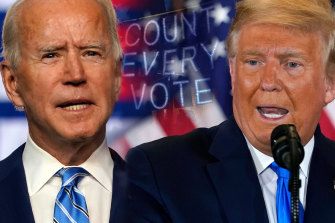 Joe Biden and Donald Trump are in a tight race for the White House.Credit: AP

Early on Wednesday, US time, Trump falsely claimed he had carried Georgia.

"It's … clear that we have won Georgia. We're up by 2.5 per cent, or 117,000 (votes) with only 7 per cent (of the vote) left" to count, Trump said during an early morning appearance at the White House. He also said he planned to contest the US presidential election before the Supreme Court. It was unclear exactly what legal action he might pursue. (We have more on Supreme Court possibilities here).

In Nevada, about 75 per cent of the votes are in and Biden leads by less than 8000 votes.

But there are outstanding ballots left to be counted in the coming days. Under state law, they can still be accepted as long as they were postmarked on or before election day, November 3.

Trump narrowly lost Nevada in 2016 and the state has trended towards the Democrats in the past decade. The last Republican presidential contender to win the state was George W. Bush in 2004.

The race is also too close to call in North Carolina, despite Trump prematurely claiming early on Wednesday, US time, that he had won the state.

"We've clearly won North Carolina, where we're up 1.7 per cent, 77,000 votes with only approximately 5 per cent left. They can't catch us," he said during an appearance at the White House.

Although Trump is correct that he held a nearly 77,000-vote lead in the state early on Wednesday, the race is too early to call with up to 116,000 mail ballots left to count, as well as the potential of thousands of provisional ballots.

In Pennsylvania, there are more than 1 million votes left to be counted.

Trump, who held a 675,000-vote lead early on Wednesday, also prematurely declared victory in that state. But by Wednesday evening, US time, his lead had slipped to about 239,000 – and the race is destined to get tighter.

One reason is because election officials are not allowed to process mail-in ballots until election day under state law. It's a form of voting that has skewed heavily in Biden's favour after Trump spent months claiming – without proof – that voting by mail would lead to widespread voter fraud.

A final vote total may not be clear for days because the use of mail-in ballots, which take more time to process, has surged as a result of the coronavirus pandemic.

Good morning and welcome to day three of our live coverage of the race for the White House, as Democrat Joe Biden pushes closer to the 270 Electoral College votes needed to win the presidency.

Neither Biden or incumbent Donald Trump has amassed the votes needed to win the election, but Biden's victories in the Great Lakes states have left him at 264 electoral votes, meaning he is one battleground state away – any would do – from becoming president-elect. 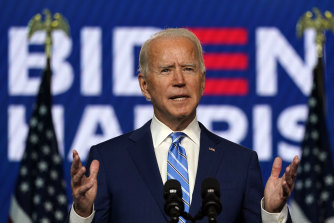 Trump, with 214 electoral votes, faces a much higher hurdle. To reach 270, he needs to claim all four remaining battlegrounds: Pennsylvania, North Carolina, Georgia and Nevada.

Trump’s campaign has engaged in a flurry of legal activity to try to improve the Republican President’s chances and cast doubt on the election results, requesting a recount in Wisconsin and filing lawsuits in Pennsylvania, Michigan and Georgia.

Stay with us throughout the night and into Friday as we cover all the latest developments.